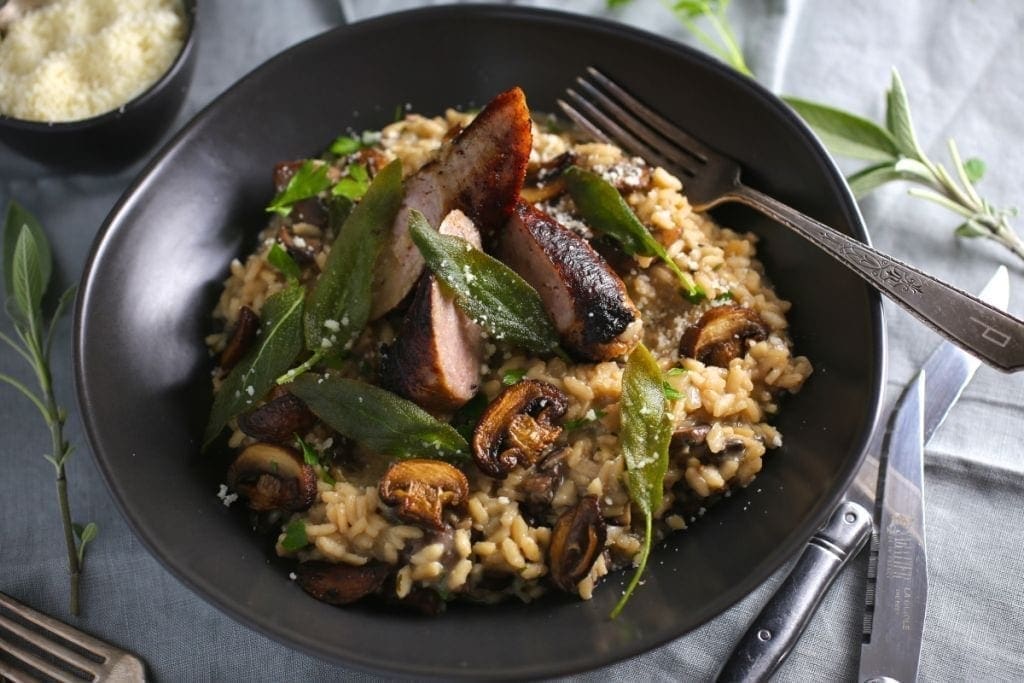 I’m not sure why but I used to think of risotto as a big complicated project. Somehow I got it in my head that you absolutely must make your own stock and add it a thimbleful at a time and stir and stir and stir and if you stop stirring for even a second, the whole thing turns to garbage.

None of that is true.

While it is true that the better the stock is, the better your risotto will be, there are a lot of ways to impart flavor into the dish using simple, everyday ingredients.

And while I’ve never had great results from simply pouring in all the stock at once, the process is a lot less delicate and precise than you might think.

The rice itself should take less than 20 minutes to go from raw to beautifully creamy and al dente. Even including the time it takes to cook the mushrooms, that’s well within the realm of an easy weeknight dinner. 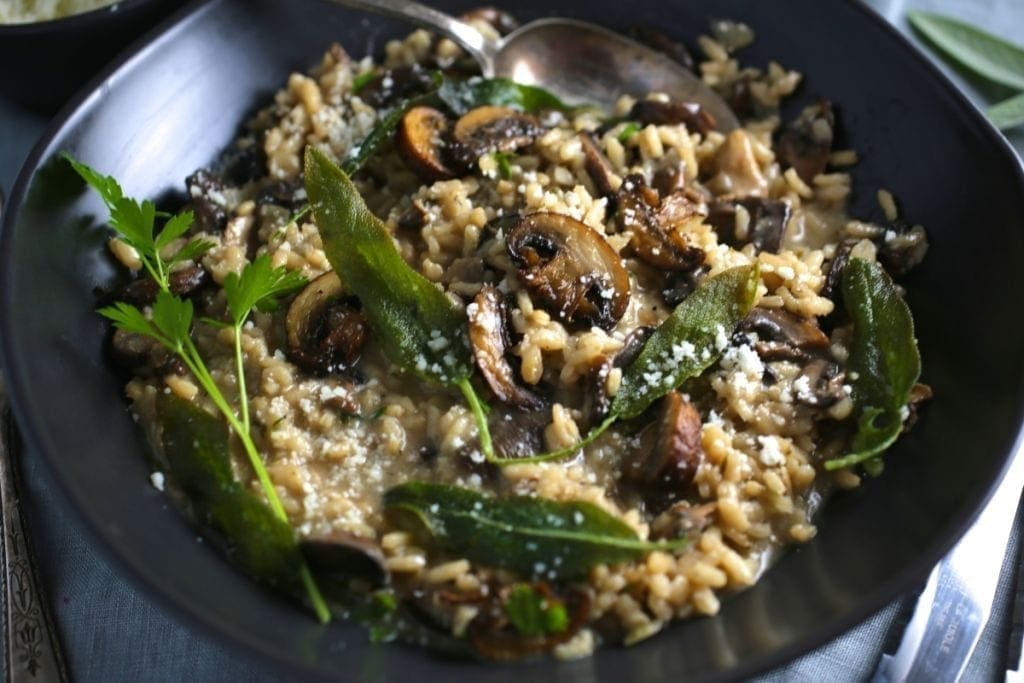 The crispy sage adds a great flavor and texture. For a VEGETARIAN version, use good vegetable stock. Look for note below on tips for making a VEGAN version.

Not shockingly, the first thing to consider when making risotto is the rice.  Using short-grain rice is key because when stirred, it releases starch that gives risotto it’s signature creamy, silky texture. If you use the wrong kind of rice, no amount of stirring will work because the starch just isn’t there to begin with. 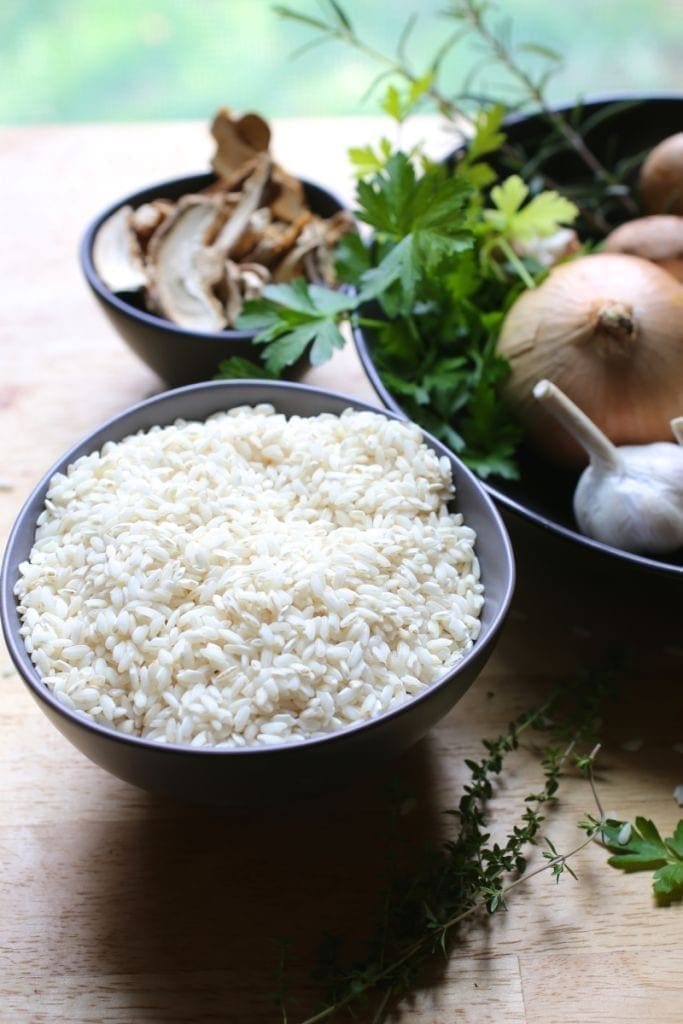 Rice for Risotto. In this case, Carnaroli.

While Arborio is the rice most people reach for, it’s actually a medium-grain rice that is quite easy to overcook and can turn mushy. It can make fantastic risotto, but it requires a lot of careful attention (of which I’m often in short supply).

I actually much prefer Carnaroli because it not only produces the creamiest risotto, each grain maintains its shape so it’s also much more forgiving to cook with. 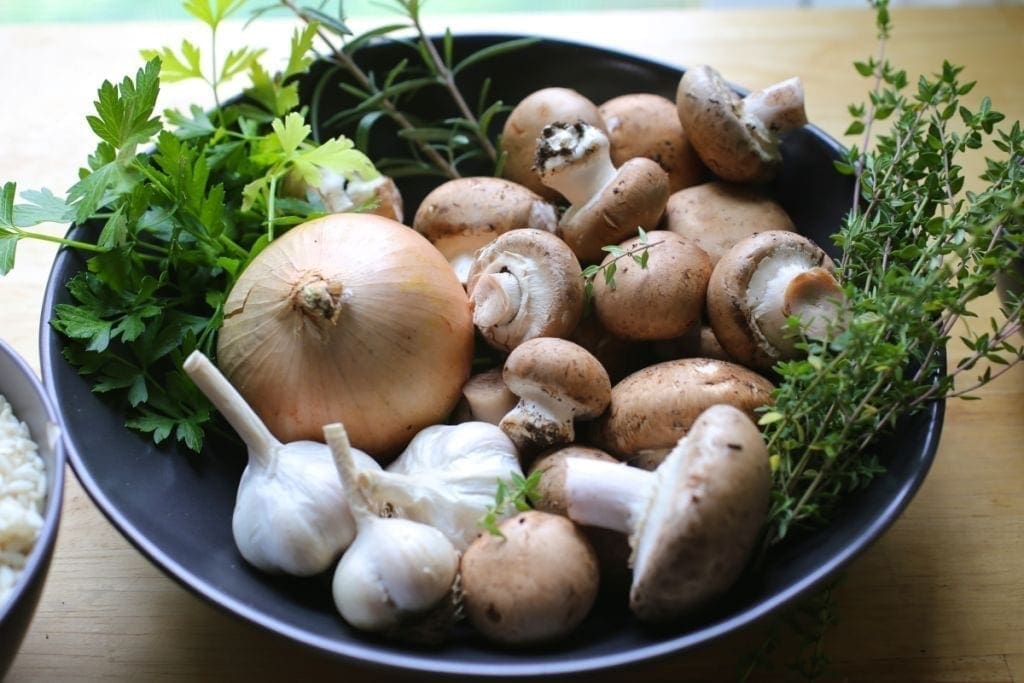 Flavorings for risotto: mushrooms, garlic, onion, and lots of herbs.

The second thing to think about is flavor. Especially if you’re using store-bought stock, you want to kick up the flavor in other ways. Onions are traditional, but garlic and lots of fresh herbs also add a lot. Use your favorites, but we like a mix of thyme, rosemary and parsley.

Since this is a mushroom risotto, we used a full pound of fresh mushrooms (ours were crimini, but a mix of cremini with other kinds like oyster, shiitake, hen of the woods and chanterelle would be fantastic. Even white button mushrooms are fine, though they don’t have nearly as much flavor). An ounce of dried porcini also adds a deep flavor, not just from the mushroom themselves, but also the broth that they soak in. 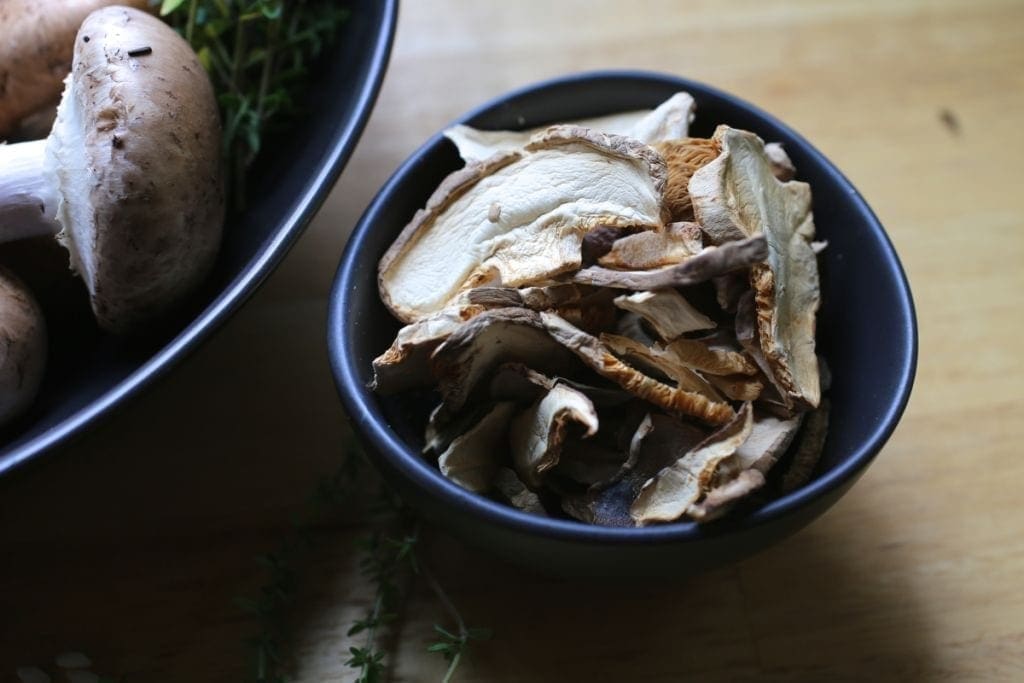 The last thing is technique. Make sure your stock is hot before you start softening the onions. You want to ‘toast’ the rice in the pan with the oil and onions (in Italian, this step is called the ‘tostatura’). Don’t let the rice actually brown because this would lock in the starch, but you do want the grains to be heated through before you add the wine. Then add the stock a ladle or two at a time and stir as much as you can without feeling obsessive about it. 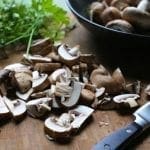 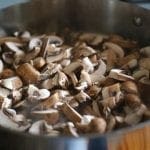 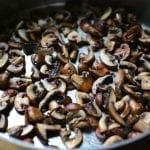 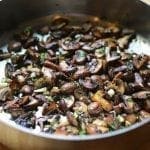 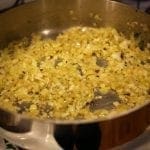 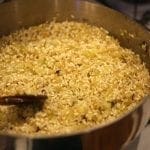 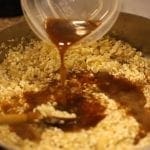 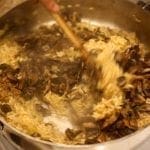 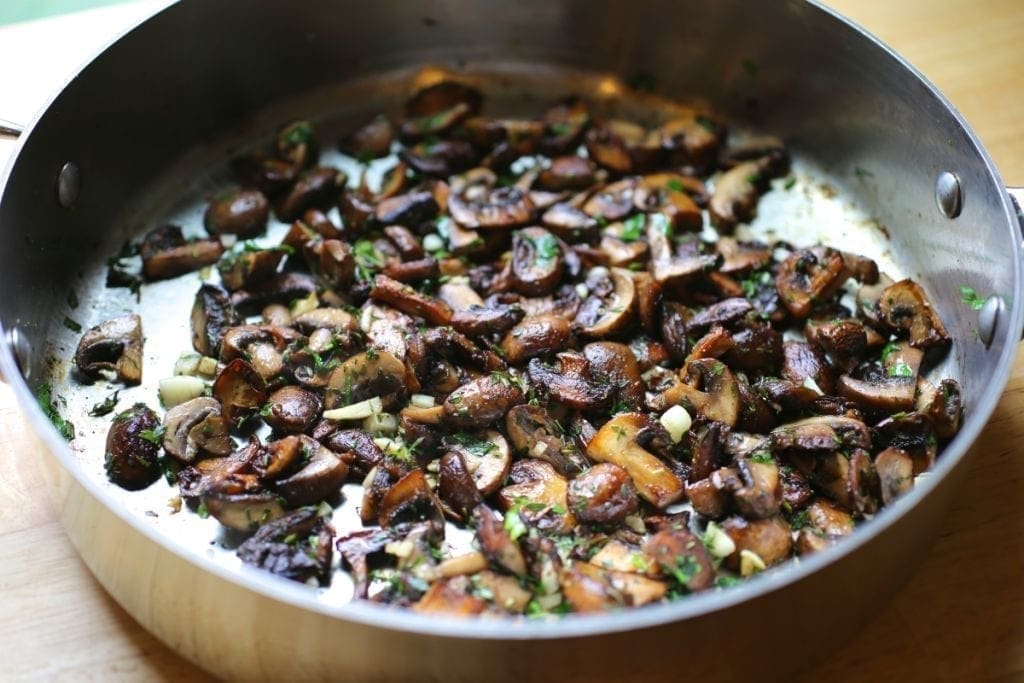 The buttery, herby, garlicky mushrooms would be great just on toast or eaten straight out of the pan.

Just to gild the lily, we topped the mushroom risotto with crispy sage and a simple but delicious pan-roasted sausage (but the risotto makes a fine meal all on its own). By the way, now that I know how easy it is, I now want crispy sage on absolutely everything, including cereal and apple pie. 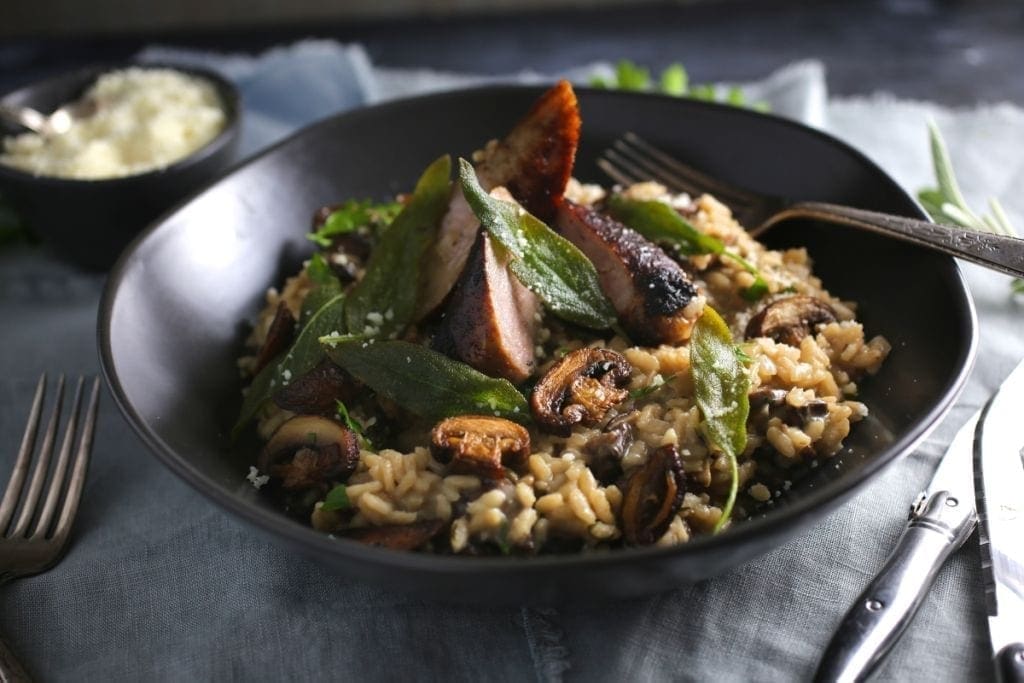 Save Print
Prep time
10 mins
Cook time
30 mins
Total time
40 mins
Author: Emily Clifton - Nerds with Knives
Serves: 6 Servings
Ingredients
Instructions
Notes
The dish could easily be made vegan by eliminating the butter and cheese. Cook the mushrooms just in oil, and to replace the salty pop that Parmesan gives, try finishing the dish with frizzled capers (capers cooked in a little hot oil until the crisp up).
3.3.3077 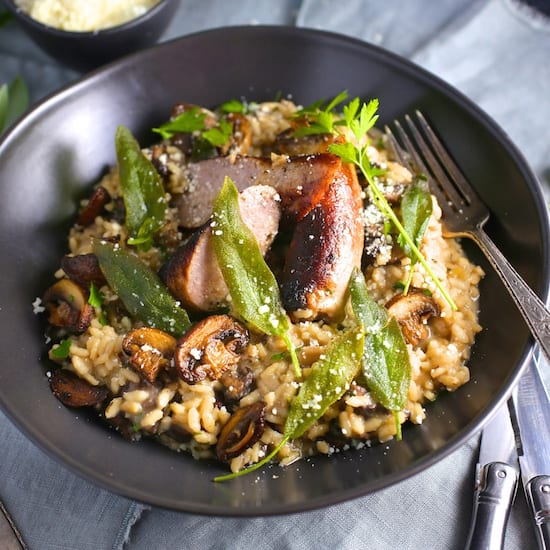