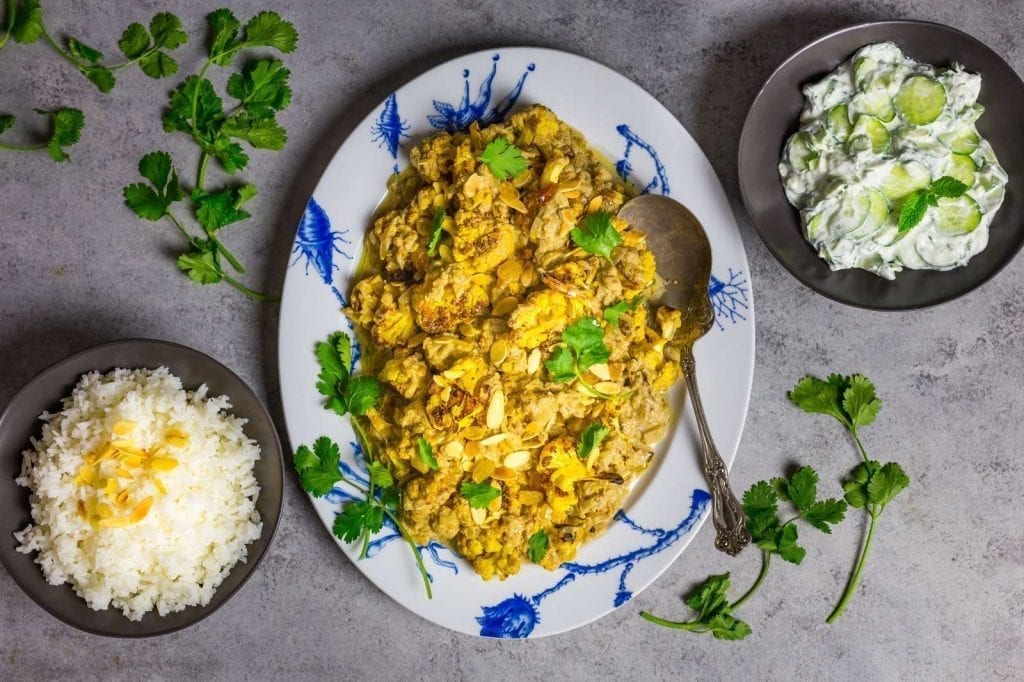 This vegetarian side dish or main course features roasted cauliflower in a fragrant, creamy sauce, spiced with ginger, cinnamon, anise, and more, and studded with plump raisins and slivers of crisp almonds.

When your childhood introduction to most vegetables is through their boiled varieties, you might be forgiven for seeking any alternative — anything at all! — to another plate of pallid, soggy specimens. I’m not saying rural England in the 1970s was unimaginative when it came to mealtimes, but … well, yes, that is actually what I’m saying. I am saying exactly that. Nothing was immune to the standard preparation (boiled beyond all recognition). I couldn’t again face parsnips or rutabaga (what we called “swede” which was served up in tiny cubes from a can) until well into my 30s. And then, of course, there was the poor old cauliflower. It’s such a healthy food – packed with nutrients and vitamins, but if you’re just going to boil it to death, what’s the point?

This article is part of our collaboration with Serious Eats.

The Heart of the Dish: Cauliflower

The first time I had cauliflower roasted, I felt like my eyes had been opened. This unassuming vegetable which had never made it past “side dish” status could be transformed into something with texture, color and sweet, caramel notes. I started noticing cauliflower steaks and soups popping up on restaurant menus.

I’ve even tried to grow it, but without too much success. It may be versatile in the kitchen, but it’s fussy in the garden. Like most brassicas (cruciferous vegetables) it doesn’t like excess heat, and the surrounding leaves protect the head from the sun to create that pure white color. In the Northeast, local varieties are harvested in the cooler months of fall, and California has a strong cauliflower crop through most of the year. That means you can reliably find good varieties of cauliflower at your local store pretty much all year round.

In the last few years, you may have noticed some fancy varieties alongside the classic white. There’s an orange cultivar, known as Cheddar. The color comes from an excess of beta carotene and it contains about 25% more vitamin A than white cauliflower. The purple variety gets its color from the antioxidant anthocyanin, which is also found in red cabbage and red wine.

You can use any variety you like though we chose the orange, which we thought would be ideal to combine with that other legacy of British colonial culinary history – the curry.

Mughlai is a general term for a style of cooking in India, and mughlai chicken often refers to a creamy, slow simmered sauce flavored with almonds, spices including cinnamon and garam masala, and golden raisins (or sultanas). But you don’t have to stick to meat: the combination of flavors is perfectly suited to roasted mughlai cauliflower.

Like with most curry recipes, the quality of the finished dish is directly related to the quality of the spices used in it. You’ll need quite a few, so this is a great opportunity to expand your spice cabinet, if you don’t have these already. For pre-ground spices, we like to buy small jars because they lose much of their potency after about 6 months. Whole spices are good for about a year. As always, it’s best to store the jars in a cool, dark place.

There’s one other key ingredient in this mughlai cauliflower recipe: golden raisins (you could also use sultanas). Unlike their cousins, which we will simply call “regular raisins”, these versions are dried using a process which keeps their skins light-colored. They also stay a little juicier than the regular kind. While Emily generally distrusts raisins for their bait-and-switch role in cookies (she calls them “I Can’t Believe They’re Not Chocolate Chips” and occasionally “the Devil’s freckles”), the golden variety are great in this recipe, adding a chew and a sweetness that marries well with both the light and the fiery spices.

How To Make the Curry

Let’s talk about preparing this delight for the senses. The first thing you’ll need to do is roast your cauliflower. Separate the florets into large bite-size florets, so they can be combined directly into the sauce and won’t take overly long to cook. Twenty minutes in a hot oven, turned once, should be plenty to turn it golden and tender. While it’s roasting, you can get the sauce going.

The key ingredient here is finely ground almonds. You might be able to find them already pre-ground at a health food store, but it’s easy enough to whizz up the flaked ones (not roasted and salted!) in a food processor. You’ll also want some flaked almonds to garnish at the end, so don’t forget to set some aside for that.

To start the sauce, soften the onions with the “hard” spices (cinnamon stick, star anise, cloves) and then add the powdered spices, ground almonds and a little water, and cook until the water is absorbed and the nuts and spices are toasted. This step is crucial to ensure that you don’t get a raw spice flavor, and the full complexity of the taste and aromas develop. Finally the yogurt and other ingredients get stirred in, and once it’s been simmered and thickened, you can stir in the roasted cauliflower until it’s hot and coated in the creamy sauce. Then transfer it to a serving platter and sprinkle it with toasted, flaked almonds and some fresh cilantro.

We love serving mughlai cauliflower with basmati rice and fresh home-made raita – plain yogurt with sliced or grated cucumber and roughly-chopped mint leaves – which provides a cool counterpoint to the hot main dish.

This dish made one of us love cauliflower again, and the other of us not hate raisins. We can’t fix all the problems of the world but that, I think, is a decent start. 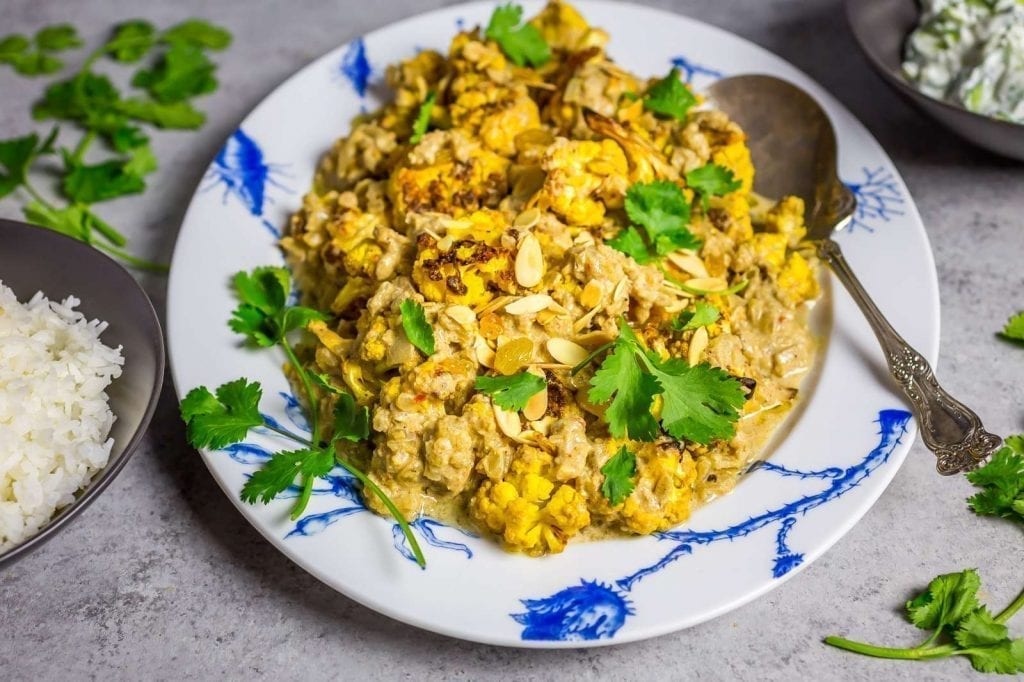