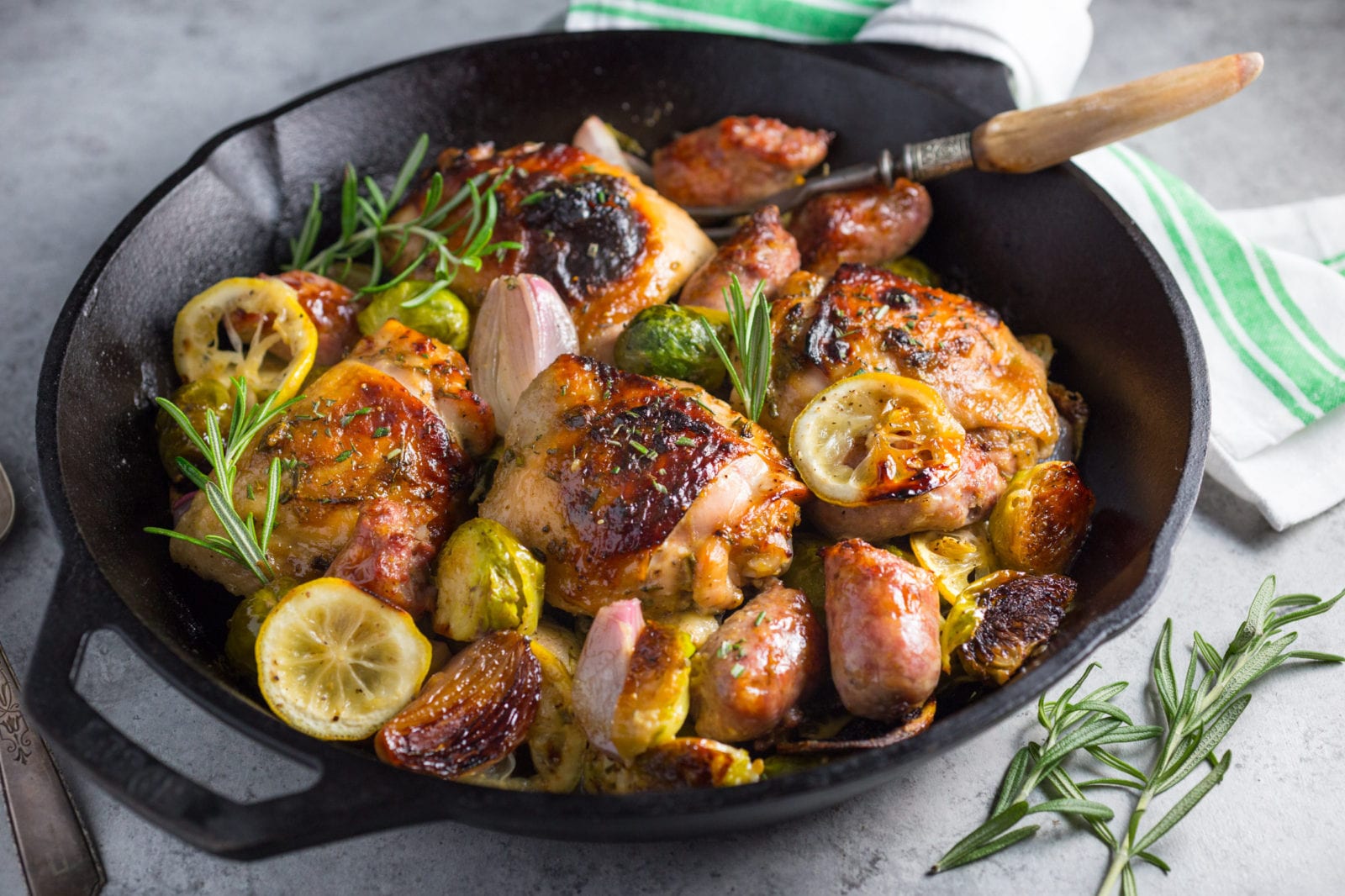 Who wants to juggle three pans on the stove for a hearty fall or winter evening meal? This crispy chicken, sausage and brussels sprouts dish bakes in a bed of spiced flavors and best of all, it uses a single skillet.

Note: This recipe is part of our series for Serious Eats. You can also find the recipe and many others on their site.

If there’s one single food that universally divides childhood from adulthood, it has to be the poor old Brussels sprout. If you weren’t commanded as a kid to “eat your sprouts!” you were either very lucky, or you had good family recipes and were able to learn early on that the sprout can be one of the most delicious vegetables imaginable. Our formative years had more “ugh” moments than “mmm” when it came to sprouts, so we’ve had to rethink our approach. Fortunately, it’s not hard to come up with a recipe that highlights the strengths of the smallest brassica.

For maximum depth of flavor, we like getting a browned, caramelized surface on the sprouts, while cooking it through enough to soften the inside. It helps to have some complementary elements, particularly juices from marinated meat, to add complexity to the taste. All this points towards a one-pan solution – meat and vegetables cooked together in a tray or skillet, optimizing the timing so that everything is ready at once. So that’s where this recipe came from. Our cast iron skillet is probably the most used pan in the kitchen arsenal, and we’ve probably made more variations on skillet chicken than any other recipe. Often, we cook the chicken skin-side down first to ensure it’s crisp, and then flip it for the rest of the cooking time, but this time we’ve used two tricks to get the skin browned in a single stage. First, there’s honey in the marinade, which works to brown and crisp the skin; and second, the oven is on high heat which intensifies the browning. 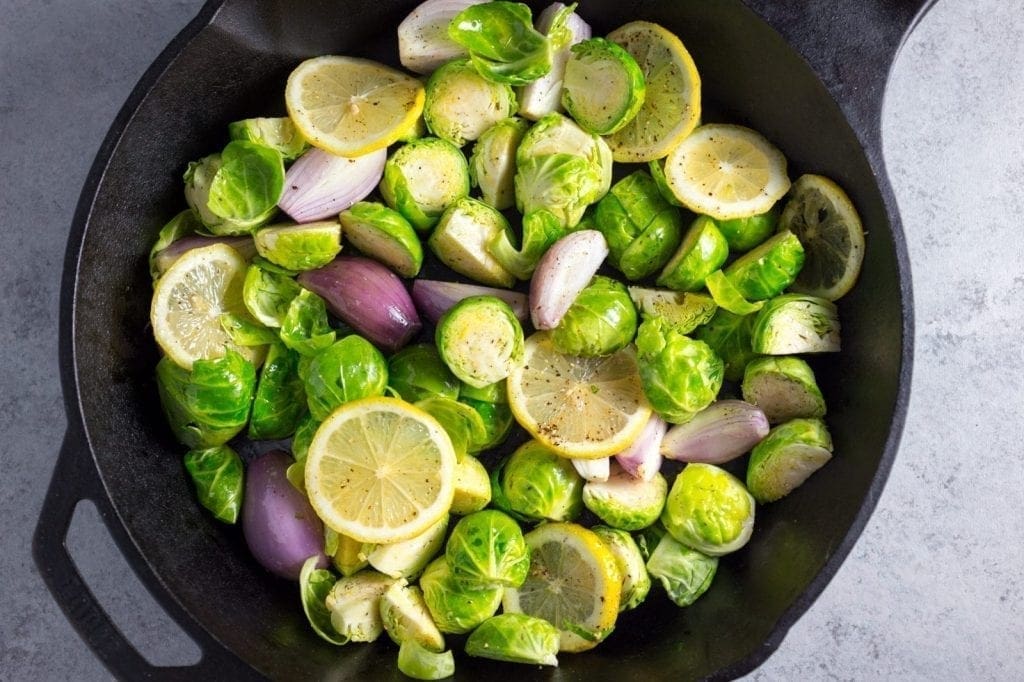 Set the vegetables into the pan 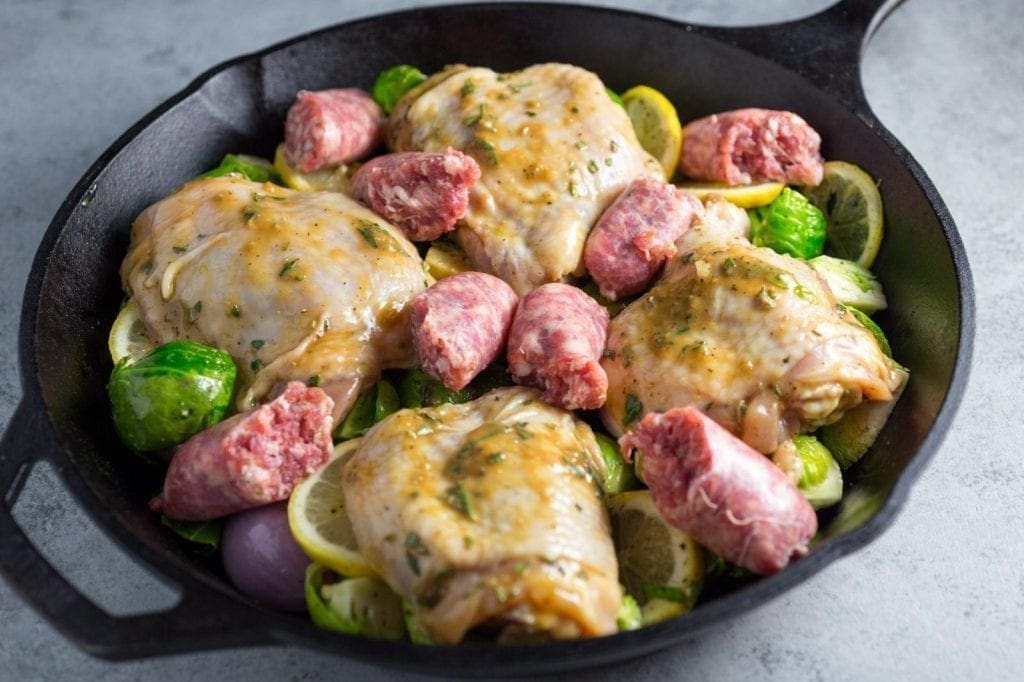 Layer the chicken and sausages on top 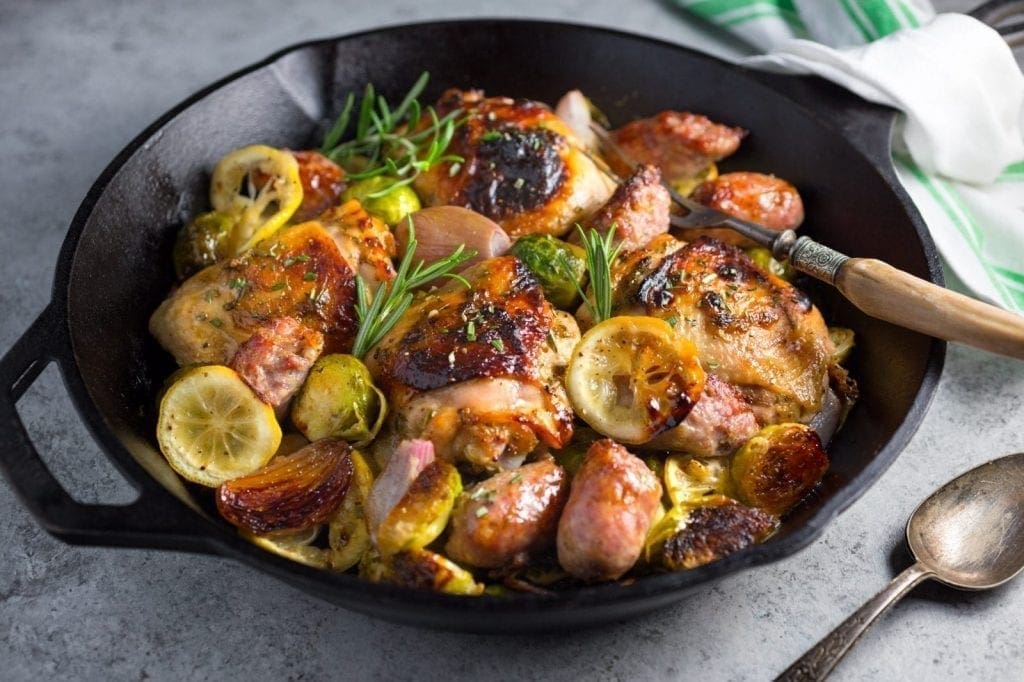 Combining the chicken with good quality Italian sausages gives you another set of flavors to add to the mix. We prefer a traditional pork sausage here since it will stay juicy – either hot or “sweet” is fine – you could substitute a differently spiced version, but be careful with chicken or turkey sausages as they tend to dry out much quicker than the pork variety.

If you’re using a baking tray, you’re unlikely to fill it, but with a skillet, be careful not to pile the sprouts up on each other too much – you don’t want them to steam. A generous single layer of vegetables should do it, and the chicken and sausages get nestled on top. Sizes of chicken thighs can vary widely, so check their temperature a little early if you have smaller pieces. You could remove the chicken to a warming plate if they’re ready before everything else.

You could serve this with a mashed potato side, but honestly, there’s a whole meal right there in the pan. Don’t be afraid to nibble the lemon slices – their tartness mellows as they caramelize. I’m not even going to remind you to eat your sprouts, because you won’t need to be told twice. 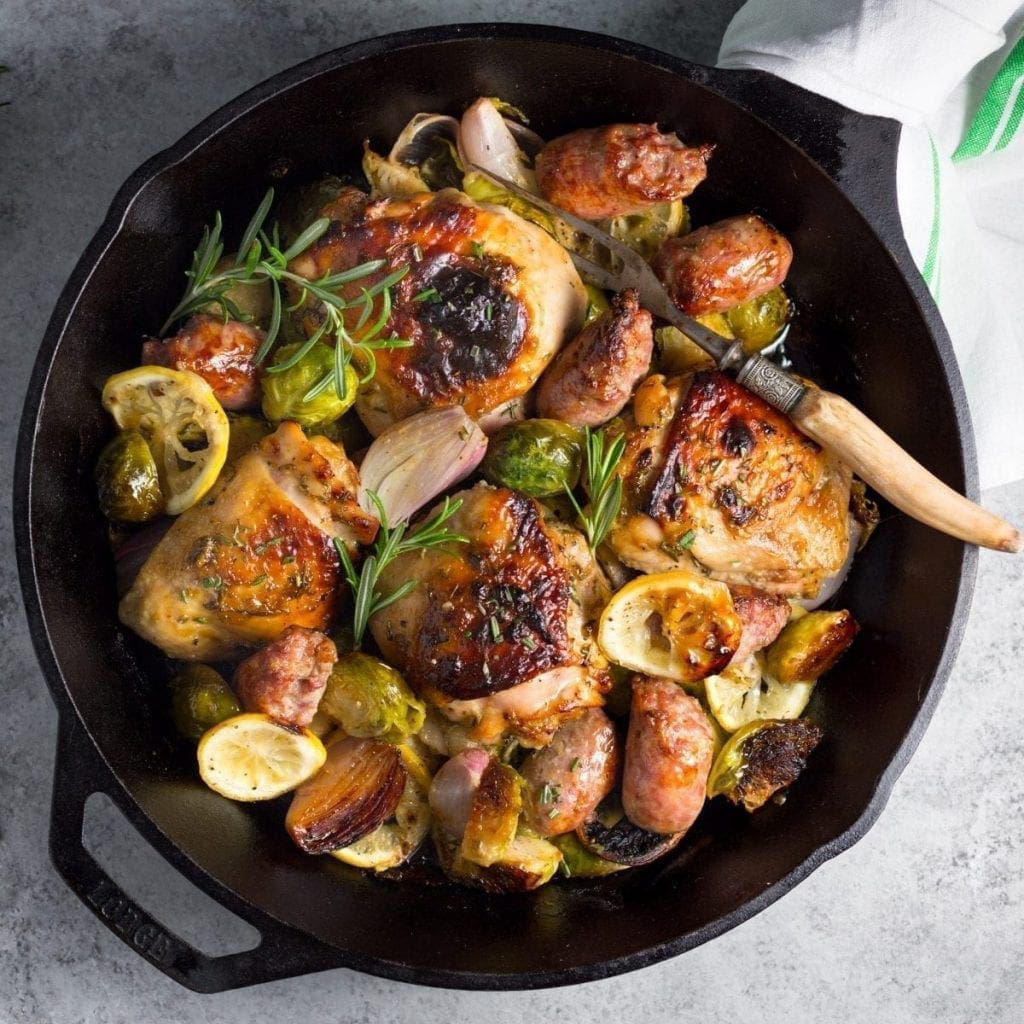 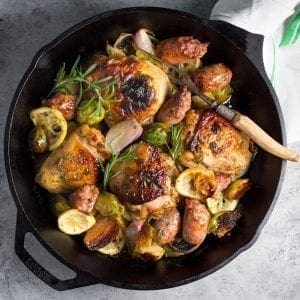