Delectable, creamy winter soup created from a blend of mushrooms, herbs, and wild rice — this is our choice for an easy and healthy vegetarian or even vegan supper that highlights the variety and richness of the fungi kingdom.

Happy new year, friends! I feel that we need to start this post with an apology for the irregular and infrequent nature of posts over the last few months of 2018. We have been trying to post a new recipe every week, but our time has been taken up by a secret project that we’re very excited to tell you about in the spring. In the meantime, we’re going to make a resolution to try to get back up to our regular posting schedule. And like all new year resolutions, it may crash and burn, but we are keeping optimistic heads on our shoulders.

For our first entry into the year’s culinary adventures, we’re showcasing mushrooms. The cold months can prove a challenge to someone looking for fresh, local, and healthy produce, and most varieties of mushroom are available all year round. They’re gorgeous, they’re really good for you, and we’d like to show you how we make them into a warm, creamy, incredibly silky soup that is as tasty as it is beautiful. For a soup this rich, there’s remarkably little dairy involved (and even that much is optional). And the only gluten is in the breadcrumb topping, so that’s easily avoidable as well, making this an easy vegan and gluten free meal. 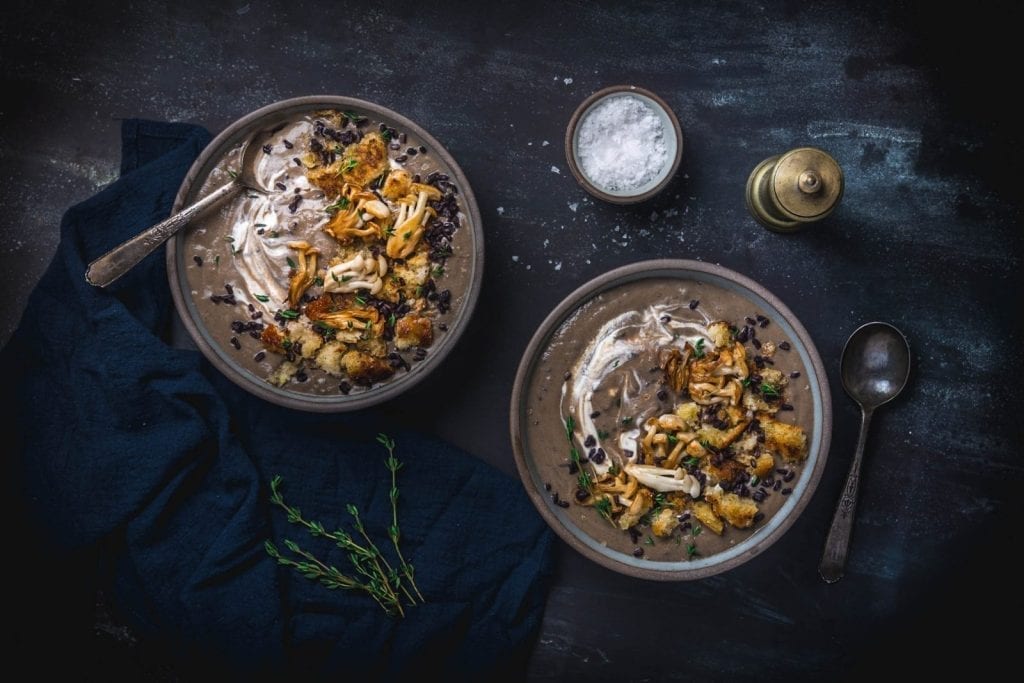 Emily was kind of a late bloomer when it comes to mushrooms. It was only a few years ago that she realized that she does, in fact, enjoy them, but only if they’re cooked, and prepared in certain ways. A raw white button mushroom, of the kind you might encounter in a deli salad, has the appearance and flavor of earthy, moldy, damp styrofoam. No bueno. Also mushrooms that have been cooked at a low temperature until they get soggy and slimy aren’t doing themselves any favors, either. But, once you cook a mushroom properly, over high heat, not moving it around too much, magic happens. It becomes beautifully brown, caramelized and develops complexity of flavor and texture. Toss in some fresh herbs, a little wine or sherry and a pat of butter … sheer heaven piled on a slice of toast or tucked inside an omelette.

Now that we have pierced the secret veil of mushroom cooking, we’ve become much more open to trying different varieties, cooked different ways. Here, we use a combination of crimini (sometimes called baby Bellas, or chestnut), and shiitake. If either of those aren’t available or too expensive, you can use whatever variety looks good — even white button mushrooms would be delicious here. For an extra punch of mushroomy richness, we also use dried porcini, which have a deep woodsy flavor. And don’t waste the liquid they reconstitute in, it’s packed with flavor too (though you will want to filter out the sandy silt that collects at the bottom).

This recipe is an updated version of a mushroom soup from The Balthazar Cookbook – the best thing about it is that it’s truly packed with mushrooms and ends up thick and creamy once blended. In fact, it’s so luxurious on its own that it doesn’t really need a creamy component added to it, though it does make the soup incredibly silky. Feel free to leave the mascarpone out if you want a vegan soup, or add just a splash of coconut or cashew cream.

We reduced much of the fat from the original recipe, added a plug of sherry (because a bit of booze makes everything yummier) and partnered it with black rice, a wild variety with a nutty flavor that you should be able to find in your grocery. (Like the mushrooms, it’s super nutritional: unprocessed rice retains a lot of the fiber and nutrition that white rice loses when processed.) You can also use wild rice (which is actually a type of grass), or red rice, which is a little shorter than black rice and has a Rooibos-like scent. Just be aware that different wild rices have very different cooking times, so make sure to follow the instructions on the bag.

Even a delicious soup needs to be prettied up some, so we topped it with caramelized enoki mushrooms and garlic-butter breadcrumbs. Enokis are a delicate variety of mushroom with tiny heads and long stems joined at the base in clumps. They’re popular in broth bowls, and once sautéed, add that characteristic mushroom shape to the top of the pureed soup. The enokis, combined with the buttery crispy breadcrumbs, add a lovely contrasting crunch to the smooth soup, along with a pretty swirl of mascarpone. Obviously the topping is completely optional (and leaving out the breadcrumbs leaves the soup Gluten Free). We had the leftovers plain, with just some crusty bread on the side and it was still fantastic.

A quick note on blending this soup: When we started writing Nerds with Knives, we placed much more of an emphasis on the tools and gadgets that we used in the kitchen. (We’re nerds, we love our gadgets.) Over time, we’ve focused more on the food and somewhat less on the tools. That being said, we recently splurged on a Vitamix blender (thank you, Cyber Monday), and absolutely love it. It turns the soup ultra-smooth, with that silky texture that only seems possible in fancy fine-dining restaurants.

But you don’t need an expensive professional blender to make mushroom soup. We’ve made it plenty of times using our crappy old blender, and several times with a stick blender. It won’t be quite as ridiculously smooth but it will be close, and the flavor will be identical. 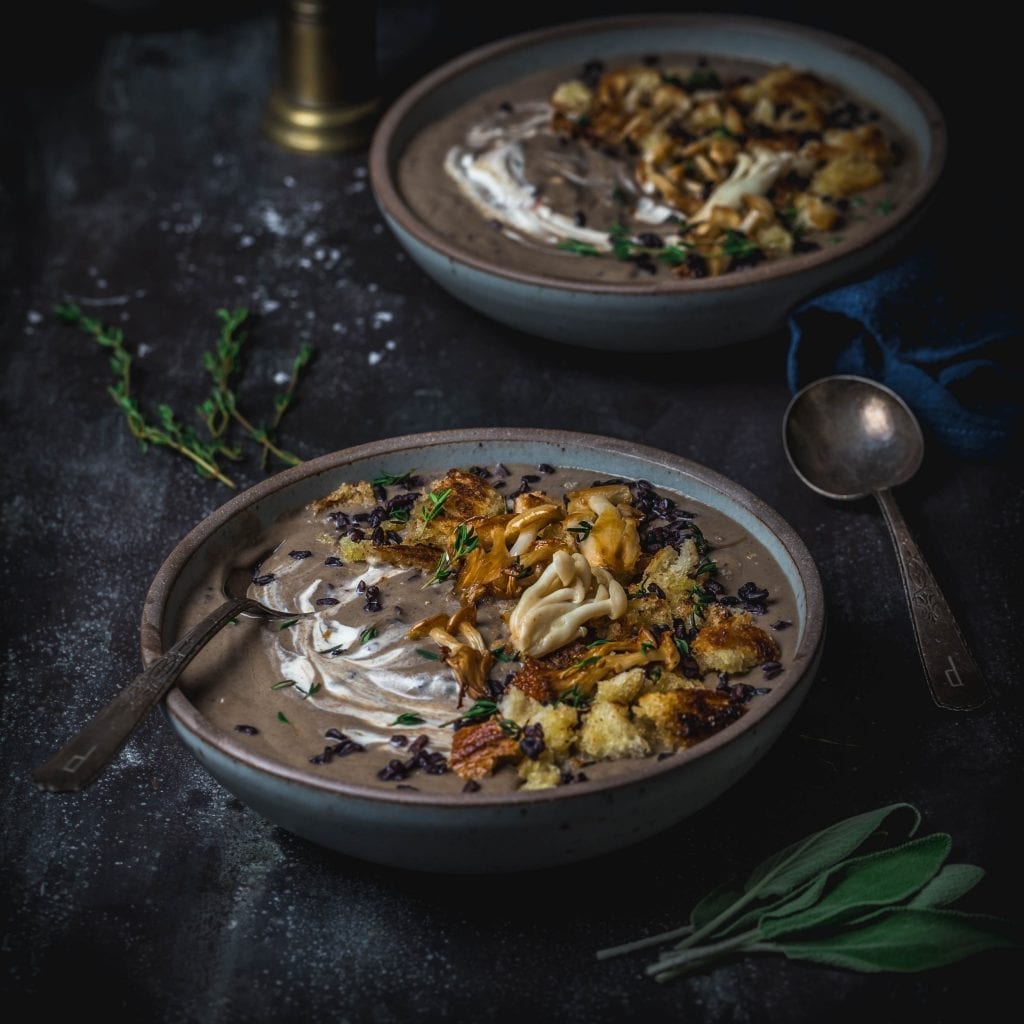 The dairy is optional, as is the breadcrumb topping, but they turn this simple soup into a showstopper.