We put together two different versions of salsa verde with some tomatillos, avocadoes, garlic and spices, and pretended to be into sports just to hang this article on a game theme! Hint: we are not into sports.

I’ve always envied people that were really into watching sports. I would love to care about something (other than nerdy television shows) enough to paint my face, don a kooky costume and brave the cold, just to prove my commitment and loyalty. To feel the agony of defeat in the hopes of, one day, just maybe, getting to experience the glory of ultimate victory.

But nope. Just don’t give a toss. Matt doesn’t follow sports either (with the exception of the occasional World Cup match, of course).

This is a rough approximation of Matt and me watching the news when the sports headlines come on.

SPORTSCASTER [Very excited]: AND THE STEELERS SCORED AN AMAZING SEVENTEEN AND FIFTY-SIX AND A HALF YARD PASSES LESS THAN SIX MINUTES APART IN THE FOURTH QUARTER! UNBELIEVABLE!!!!!

MATT [Pops a chip in his mouth]: What is this? Are they playing shove ha’penny?

We are not Sports People.

I kind of want to watch the Super Bowl sometime with our sporty friends just to see what it’s all about but I’m afraid their heads would explode with all the dumb questions I would ask. Examples; Why are they stopping? Is that guy mad, because he looks mad. What do those numbers mean? Why did they get all those points if the just scored a base goal once? Why are they stopping again? Is there any more beer?

But the one sport watching ritual I can totally get behind? Snacks for dinner. That, my friends, is living the dream.

Speaking of dreams, this Roasted Tomatillo Salsa Verde is super easy to make.  I’m also giving you the recipe for two versions. The first is pretty much the classic salsa verde, (which is delicious and has the added benefit of being vegan*). The other version adds a creamy element to the original, with the addition of ripe avocado and a little bit of sour cream. It’s almost like a smooth, creamy guacamole. So, so good. *For a creamy vegan version, add the avocado but leave out the sour cream.

How we got Tomatillos

We ended up with tomatillos kind of by accident. I (Matt) did some volunteering at the local Common Ground Farm earlier in the year, and came home with a bunch of plants in early stages of growth. I’d been told what they all were and had forgotten everything by the time I got home, and we just planted them semi-randomly in pots. Anyway, as it turns out, we’d been given two tomatillo plants, one of which got promptly squashed by a marauding chicken. Tomatillos are not self-fertilizing, which means you have to have two in proximity for them to fruit. It seems that someone nearby had one, and the pollinators did their handiwork, because we ended up with a nice crop just from that one plant. Isn’t nature brilliant!

You can serve either version just with tortilla chips or on top of nachos. It would be delicious as a sauce on grilled or roasted chicken or shrimp. 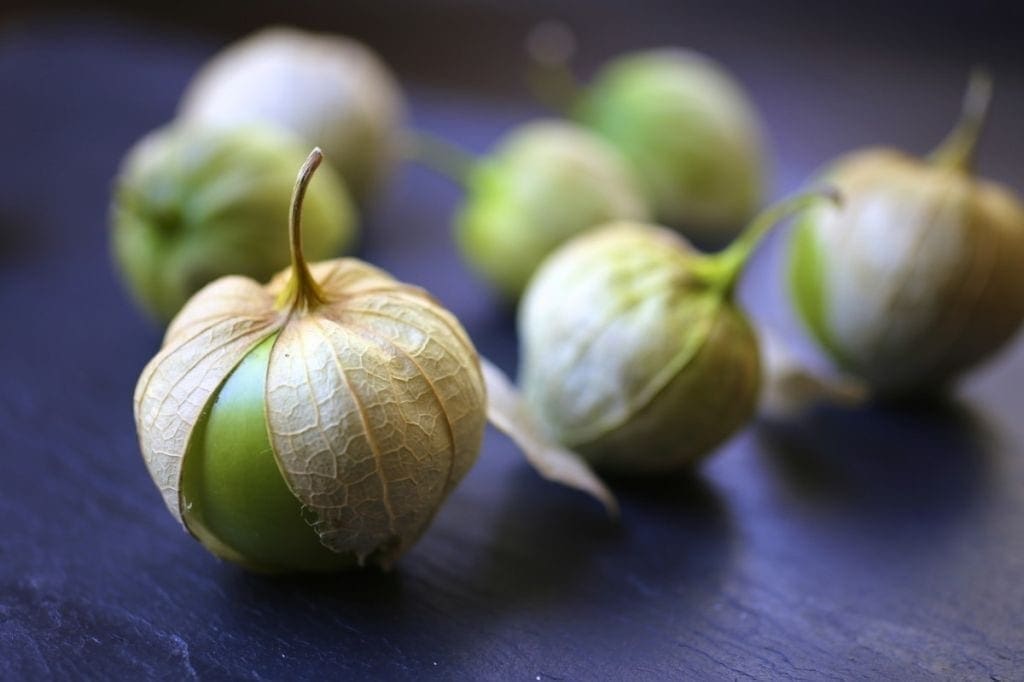 Tomatillos look like green tomatoes but they’re actually more closely related to gooseberries. They have a tart, almost citrusy flavor.

They grow inside a husk that turns papery and brown when they tomatillos are ripe. Added Nerd points: we grew these ourselves! 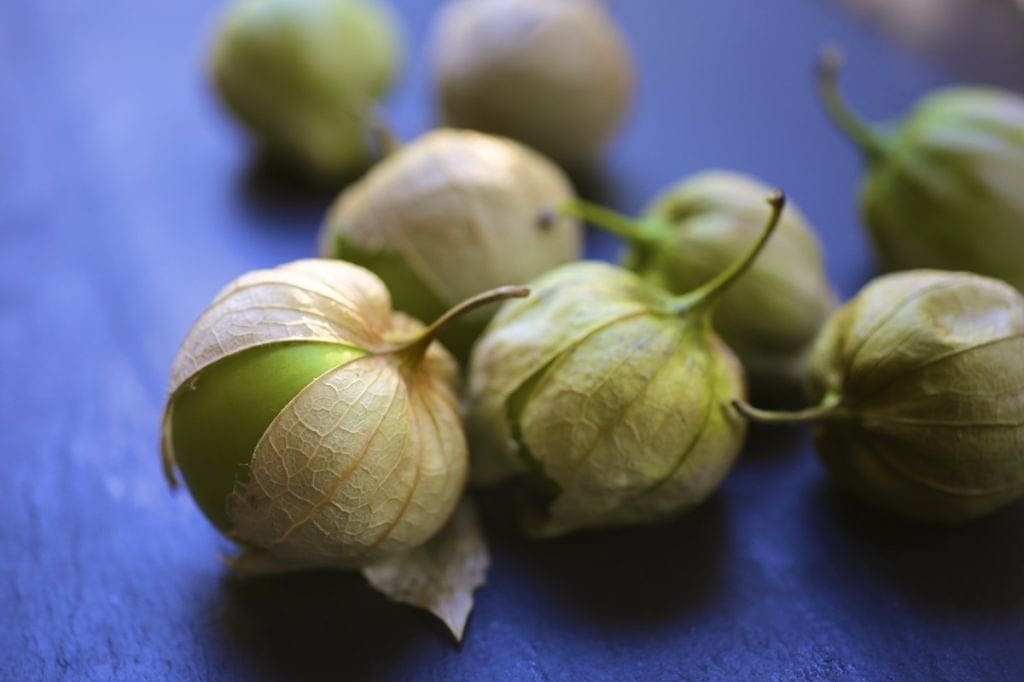 The husks have to be removed before preparing, You can wash the fruit with soap and water to remove the sticky film on the fruit. 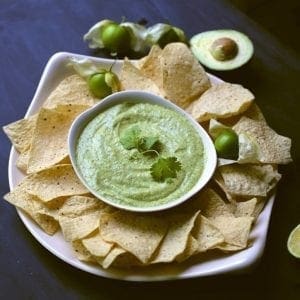