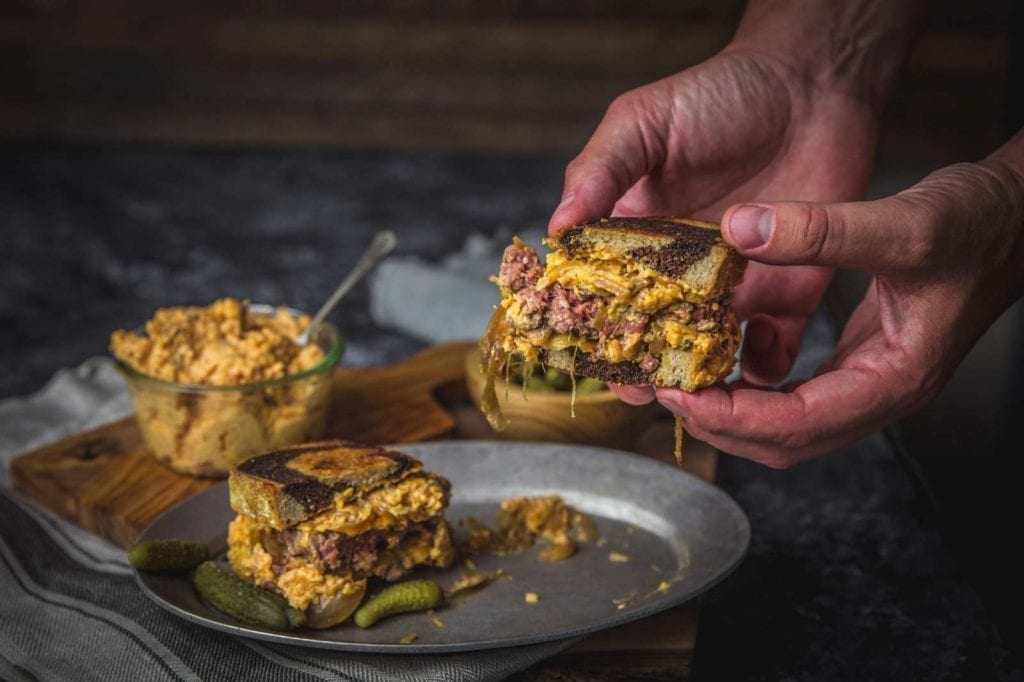 A classic American sandwich, with a twist: Kimchi Pimento Cheese Patty Melt. It’s a thin burger topped with caramelized onions, served on griddled rye bread slathered with spicy Kimchi Pimento Cheese. A happy, if messy, marriage between a burger and a buttery grilled cheese sandwich, this is the ultimate five-napkin dinner.

Even though I grew up in New York, I’d never had a patty melt until just a few years ago. The classic version (a thin ground beef patty topped with either Swiss or cheddar cheese and grilled onions on rye bread, pan fried in butter) was said to have originated in Southern California in the restaurant chain of William “Tiny” Naylor in the 1940s or 1950s. It’s become a staple of diners, bars and dives all over the U.S.

Basically a happy, messy mashup of a grilled onion-topped burger and a grilled cheese sandwich, as soon as we made our first batch of Kimchi Pimento Cheese, we knew what we wanted to do with it. 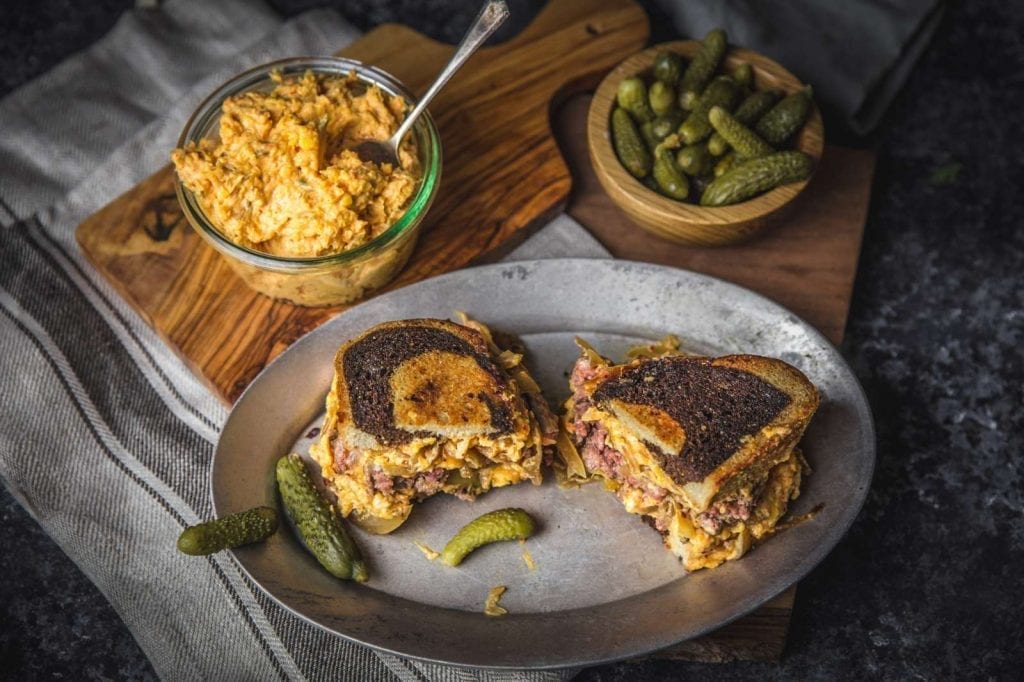 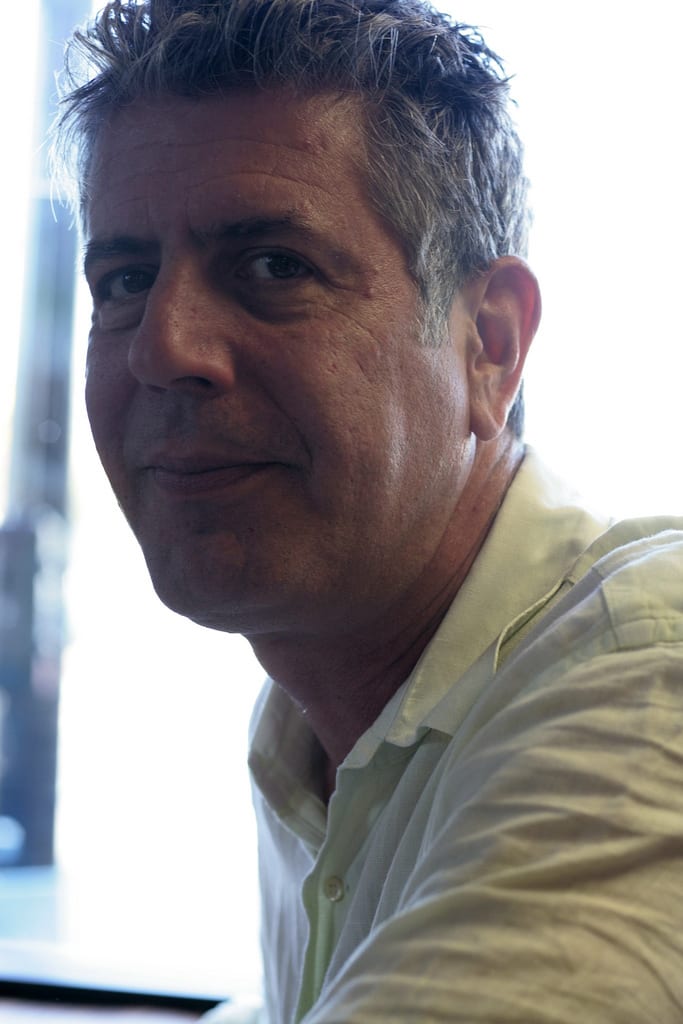 We want to take a moment to honor the passing of Anthony Bourdain.

I find it very hard to express how sad I am about Anthony Bourdain’s passing. The outpouring of tributes, both by people who knew him personally and fans like me who felt like they did, prove just how wide his reach was. It’s heartbreaking to think he was in so much pain that he didn’t know how much we valued him, and needed him. Not just to entertain us, but to teach us.

And most importantly, especially in light of today’s America, he taught us to not be afraid of the unfamiliar. That if you approach something new with an open mind and an open heart, you will find it may not be what you expected, and you will be enriched by the experience. He encouraged us to be curious, open minded and unafraid. He taught us that the best thing you can do for yourself and your community is to travel, explore and learn. Then bring back what you experienced and share it with with friends – in the form of stories, recipes, music and art.

As we’ve mentioned in previous posts, Matt and I recently took a road trip down the east coast of the US, from New York to Florida. We had wonderful, interesting, inspiring food throughout the trip but one dish really stuck with me. You’re going to laugh, because it was a humble hamburger. Not just any hamburger, mind you. It was the K-Town BLT Burger from Boiler Room in Kinston, North Carolina.

Owned by the amazing chef Vivian Howard, Boiler Room is the casual, laid-back cousin to her signature restaurant, Chef and the Farmer, which we also loved. But our night at Boiler Room was perfection. Exactly what you want after an 8-hour drive through the misty, boggy swampland that is north Florida and Georgia. Cold oysters, strong cocktails and perfect, juicy hamburgers.

The K-Town (which stands for K-inston not K-orea, as I first assumed) had pimento cheese, pickled green tomato, pepper jelly, bacon and spicy sriracha mayo. It was glorious, messy and we loved it. I blame my faulty recollection on the cocktails and the very long drive, but I was absolutely sure that it had kimchi in it. It doesn’t, but the idea of a burger with Kimchi Pimento Cheese was born that night and this is the result. Rye bread is traditional, but any good thick sandwich bread will do. Our loaf of marbled rye was on the small side, and not ideal, because the 1/4 pound burgers are formed to the shape of the bread, and thus ended up a little thicker than I would have liked them to be. A wider slice of bread = a thinner patty. Regardless, the flavor was amazing.

Everything is cooked in one pan, so a good heavy 10 or 12-inch skillet is key. Cast iron is perfect here. First, caramelize some onions. This takes a little time, but not a lot of work. Add a few tablespoons of water to the pan every so often as the onions cook, which keeps the brown bits from burning, and turns the onions tender and deeply golden. Once they’re done, remove them to a plate and prepare the beef.

Flatten the patties to roughly the size and shape of your bread, season them well and cook them in the very hot pan in a little butter until one side forms a dark brown crust. Don’t move them around the pan at all. Flip, and brown the other side. This happens quickly: maybe 2 minutes for the first side, even less for the second. Then move them off to a plate, lower the heat to medium-low and wipe out the pan.

To assemble the patty melts, smear some kimchi pimento cheese on 4 slices of bread. Add some caramelized onions on top of two of the slices, then top with the burgers, and close the sandwiches up. Next, they get griddled in a little more butter on both sides until the bread is deep golden brown and the cheese is beginning to melt.

One warning: this is a supremely, gloriously messy sandwich. We suggest you revel in it whole heartedly, unapologetically, and with gusto. We like to serve them with little sour pickles and a good bitter green salad. And beer. To toast life.