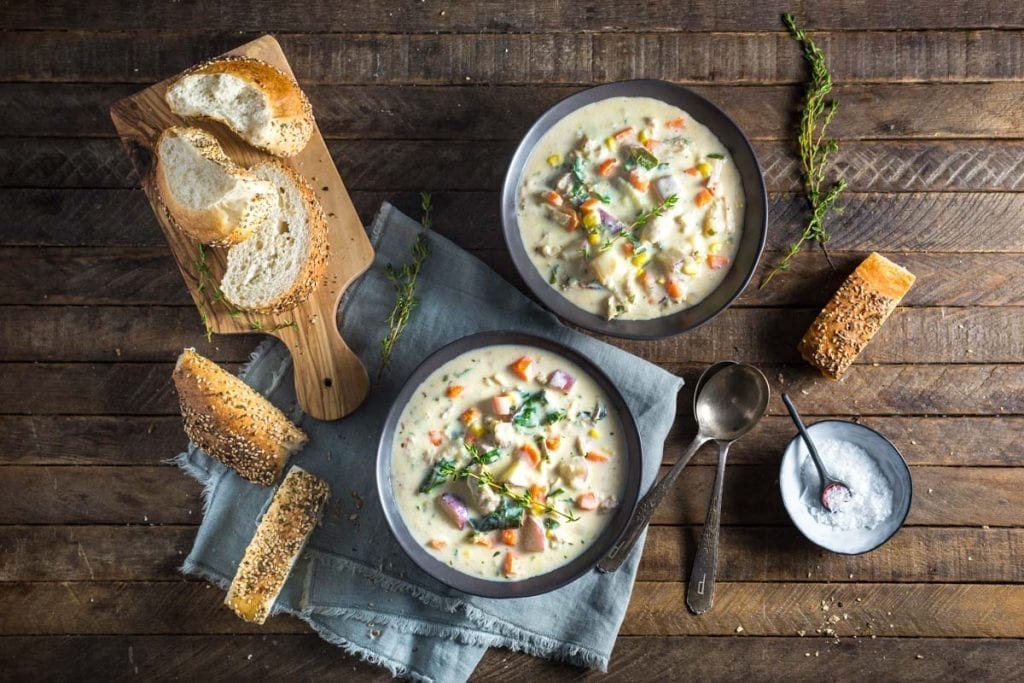 This comforting chicken chowder is packed with vegetables including potatoes, chard and corn. It’s guaranteed to warm you up even on the coldest of days.

There are few terms more accurately descriptive than “Polar Vortex”. It does just what it says on the tin (i.e., freeze your goddamn buns off). We are in the middle of one right now and it’s freaking cold outside. And because we have an old house, it’s pretty cold inside too.

And since Matt and I mostly work from home, you can see why we’re desperate for a hot, nourishing, tasty lunch. Luckily this soup is exactly what the doctor (and freezing film editor) ordered. We were inspired by a version of this soup from Bob’s Mountain Deli around the corner from us in Beacon. We look forward to them making this soup for our lunch orders every winter, but some days you just don’t want to leave the house. So this is our version. 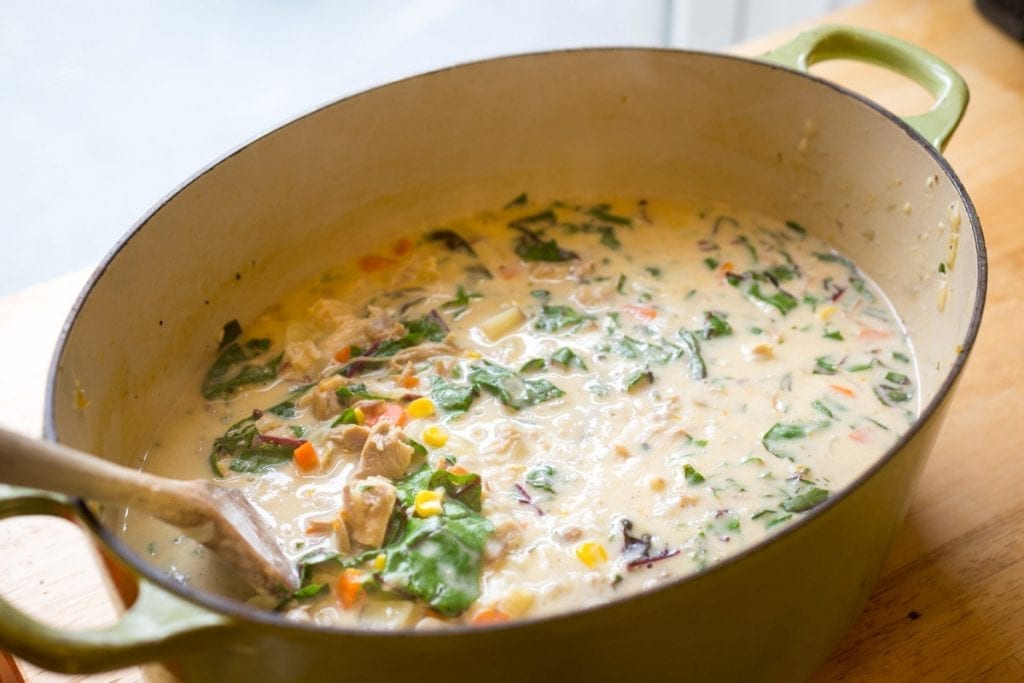 I love chowder-type soups, but they can often be a little bland, both in flavor and looks. Many recipes use a lot of cream, white potatoes, white chicken and not much else. With this version, I really wanted to freshen and lighten it up a bit by adding lots of fresh vegetables. Instead of cream, we use a combination of milk, stock and my favorite secret ingredient for adding body to any creamy dish, cream cheese. You probably know this already but if you want to make a quick, easy cream sauce – cream cheese is your friend. Gently melt a few tablespoons of it (or its lower fat cousin, Neufchâtel) and you have an instant, thick sauce that you can flavor in multitudes of ways. It’s magic.

Note: we do use a little flour (in a roux) for extra thickening, but it you want a Gluten Free version of this soup,  leave out the flour and add a little extra cream cheese until the soup has the consistency you like. You can also use corn starch or potato starch slurry (starch mixed with a little liquid) but add just a little at a time because the texture can be a little gelatinous. 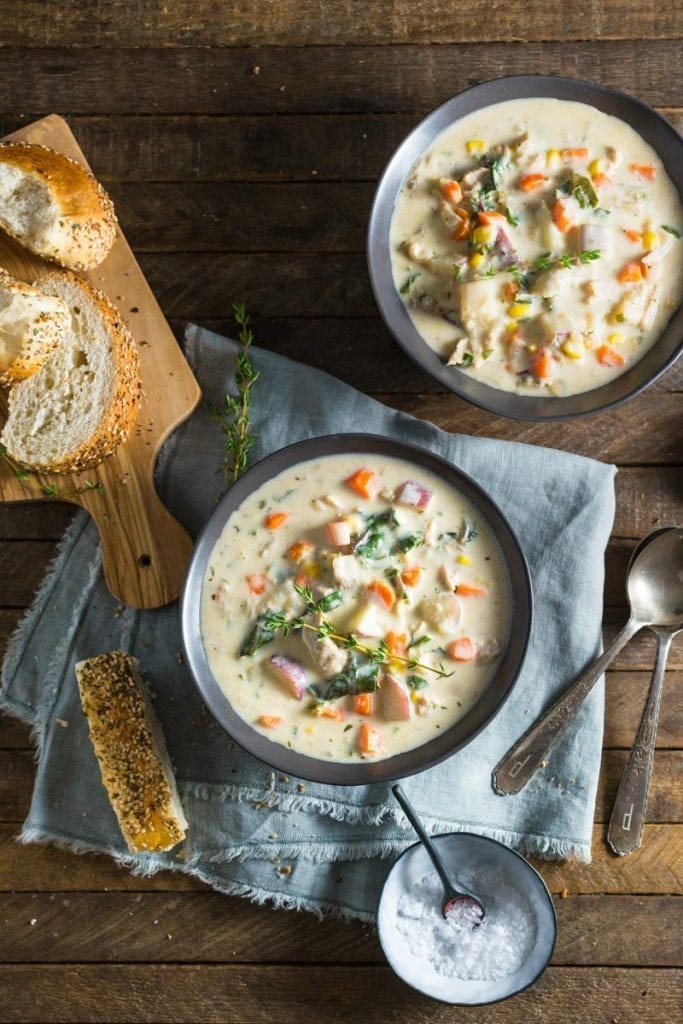 A creamy soup that uses no cream? Yes, it’s possible.

Potatoes are pretty much a chowder must-have, but instead of the more common russets, we recommend using waxy red-skinned potatoes. The term “waxy” means that this type of potato is high-moisture and low starch, which allows it to hold its shape when cooked. They’re my favorite choice for soups and stews because they don’t get mushy and fall apart and they have a smooth, silky texture. This is especially important if you plan to have leftovers that will need to be reheated several times (which I always hope I do).

Aside from the standard onions, carrots and celery, we also add sweet corn and a few handfuls of chard. Chard is one of my favorite greens and we cook with it just about every week (but any leafy green would work, including kale and spinach). It adds just the right amount of vitamin-packed vegetable flavor, without overpowering the creamy soup base.

We actually used the last of our leftover Thanksgiving turkey but any precooked chicken or turkey would work well. This is a great use of a rotisserie chicken, leftover Thanksgiving or Christmas turkey or an extra couple of chicken breasts you might find. White or dark meat works equally well, though discard any skin before shredding the meat. 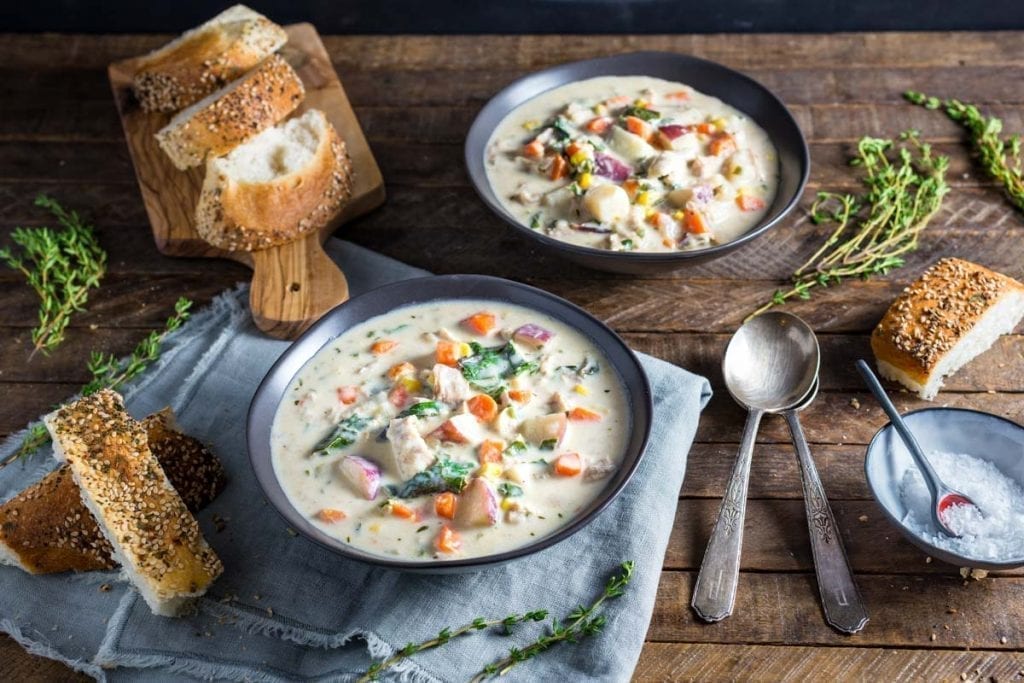