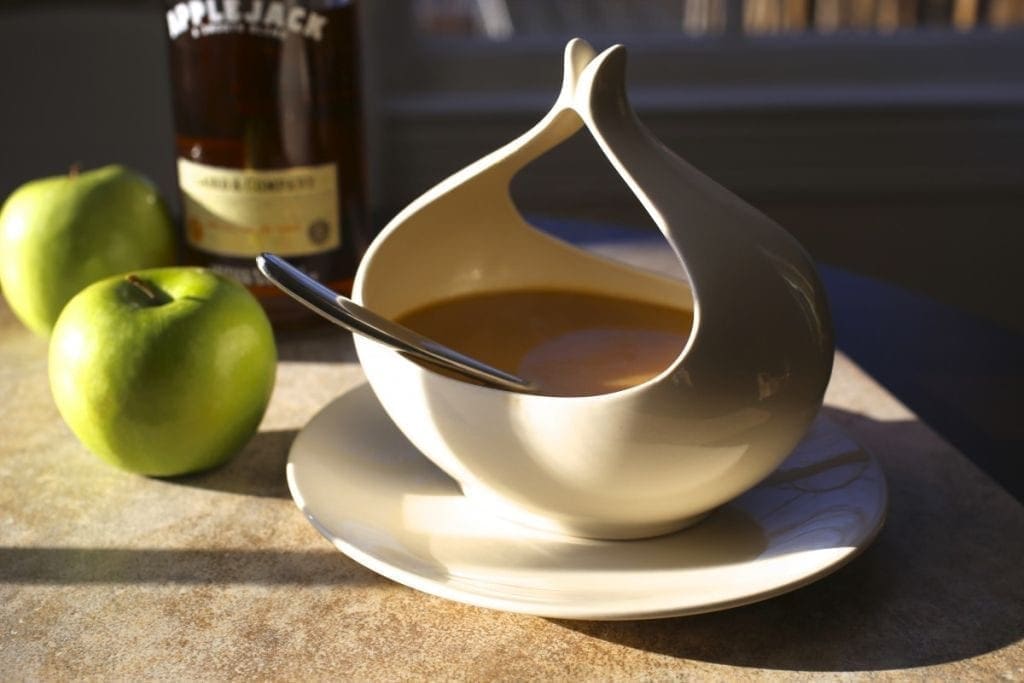 For the last few years, my Thanksgiving philosophy has been “Everything that CAN be made ahead SHALL be made ahead”. I developed this philosophy (religion?) several years ago when Matt and I decided to make Thanksgiving for 13 people in our teeny, tiny Brooklyn kitchen. Our oven could barely fit a normal-sized turkey, let alone anything else at the same time.  We made just about everything we could possibly make days ahead and heated things up while the turkey was resting.

Now we have a normal (ginormous, for us) kitchen, but the make-ahead strategy is still as useful as ever. That is what I love about this gravy (besides its heavenly flavor). I don’t know about you, but for me, the 10 minutes before serving Thanksgiving dinner are the most chaotic and I really don’t want to be measuring flour and reducing stock right at the last minute.

That’s why I really like this method. A few days ahead (or even a week or two), I make stock and from that stock, I make the gravy “base”. Then on Thanksgiving day, I reheat it (the longer it simmers, the better) and when the turkey’s done, I deglaze the roasting pan with some wine and add it to the already simmering gravy. Done! So much easier, seriously.

This gravy has a delicious touch of apple-y sweetness from the Calvados and apple cider. You could substitute Apple Jack, which is a really nice American equivalent and is a lot more affordable. I adapted a Barefoot Contessa recipe which has finely chopped onions in the base. Obviously this will give the gravy some texture so if you like it perfectly smooth, just use an immersion blender (or a regular blender) to puree it.

In a large pot, cook the butter and onions over medium-low heat for 12 to 15 minutes, until the onions are lightly browned. Don’t rush this step; it makes all the difference when the onions are well-cooked.

Sprinkle the flour into the pan, whisk in, then add the salt and pepper. Cook for 2 to 3 minutes. Add the Calvados and wine, stir and then add turkey stock and cook uncovered until thickened. It should be slightly thicker than your usual gravy would be.

Do not be surprised if the gravy looks a little pale at this stage. It gets a lot of color and richness from the deglazed turkey dripping you’ll add at the very end.

Let cool to room temperature and refrigerate up to 3 days or freeze up to 6 weeks.

If frozen, defrost in the fridge a day or two ahead. When ready to use, heat on a very low stove for as long as you can, stirring occasionally. I like to cook it for an hour or two so it gets really silky but this step is totally optional. You could just heat it until it’s hot.

When your turkey is done, deglaze the roasting pan with more wine and a 1/2 cup of stock. Strain into gravy (de-fat first, if needed), add the apple cider, check for seasoning and serve!

If you’re a maniac like me and want to get as much flavor as you can into your gravy, you could do this step as well. On Thanksgiving day, after you’ve removed the neck and giblets from the turkey, dry them well and brown them well in a pot with a little oil (except the liver which you could use for something else).

Once the pieces are very brown, add your gravy base and let it gently simmer as long as you can. Remove them before serving.