Bulgogi is a Korean dish of meltingly tender, thinly-sliced beef seasoned in a delicious soy and sugar marinade. We serve it in lettuce cups with lots of bright vegetable side dishes.

I was a pretty picky eater as a kid. If I could smother something in ketchup it was usually safe but I wasn’t what you would call adventurous (no fish of any kind, nothing mushy). Kids are so weird though. My favorite after-school snack was crackers smeared with cream cheese, sprinkled with garlic powder. I thought I was such a gourmet. Matt liked condensed milk sandwiches. And weirdest of all, my brother’s favorite snack was smoked oysters dipped in Thousand Island dressing. This was when he was ten, and no, we didn’t live on the set of Dynasty. 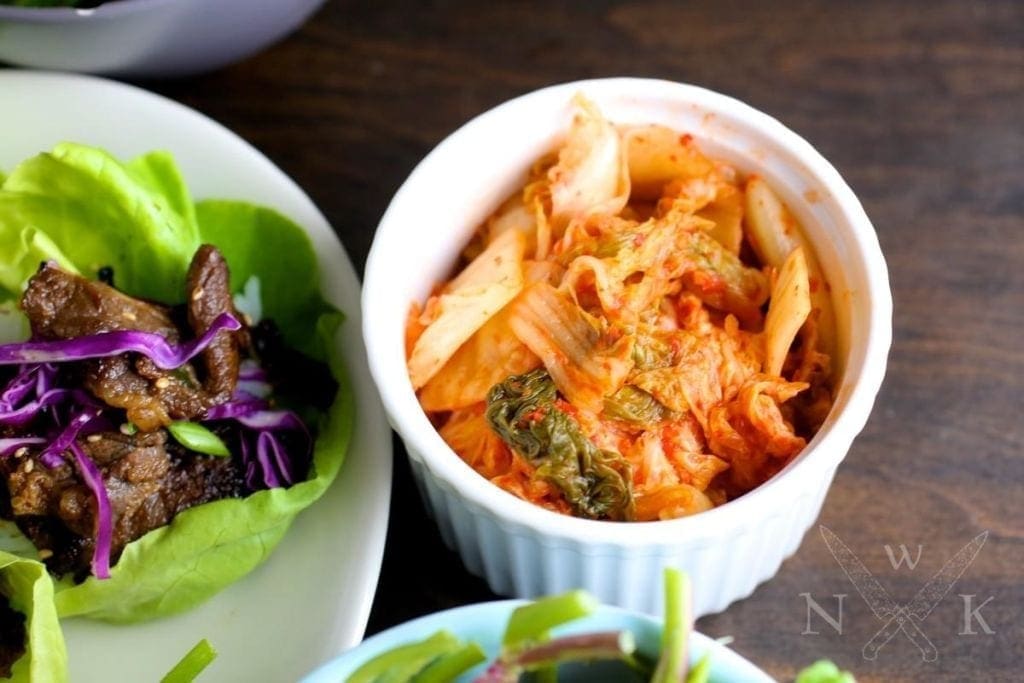 Anyway, the point is that I was a picky little brat except when it came to Korean food. I wouldn’t eat mashed potatoes for all the money in the world but give me seaweed and a bowl of kimchi and I was set. In fact to this day, my comfort food is toasted seaweed with rice, avocado and kimchi.

My favorite Korean dish is Bulgogi (in Korean, literally “fire-meat”) which is very thinly sliced beef that has been marinated in a delicious sweet soy mixture and then grilled or pan-seared. For some reason I always thought of this as a complicated restaurant-only dish. I was wrong. Turns out Bulgogi is not only delicious, it’s also super easy to make. 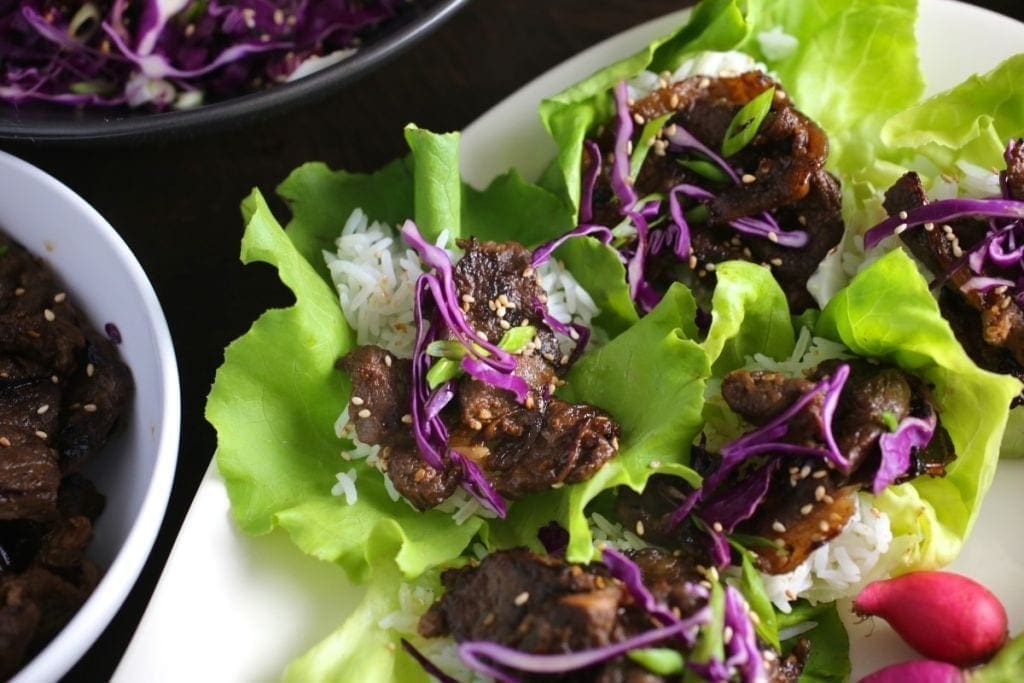 The marinade is really pretty simple. It’s a mixture of soy, sugar, sesame oil mixed with aromatics like ginger, garlic and scallion. One traditional ingredient that might come as a surprise is grated pear. Round, yellow Asian pears are traditional but you could use Bosc or any pear you like. It may seem odd but pear contains an enzyme called calpain that helps to tenderize the meat. If you’re using an incredibly tender cut like ribeye the pear isn’t really necessary but for the chewier cuts, it’s helpful.

Speaking of meat, you have a lot of choices for what cut of beef you use. Some recipes call for sirloin, tenderloin, skirt steak or rib eye. (If you have access to an Asian specialty store, they often sell pre-sliced ribeye for Bulgogi). Whatever you choose, you want meat that has plenty of marbling. Lean cuts like brisket will be too tough. 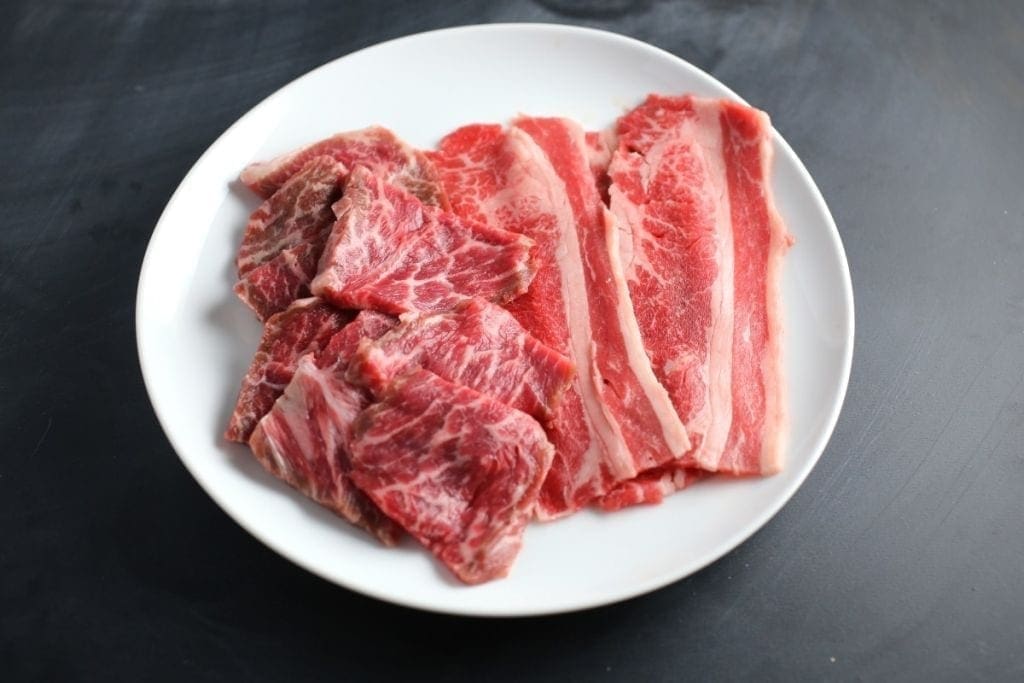 The short rib we sliced ourselves is on the left, the right is ribeye pre-sliced at a Korean market. 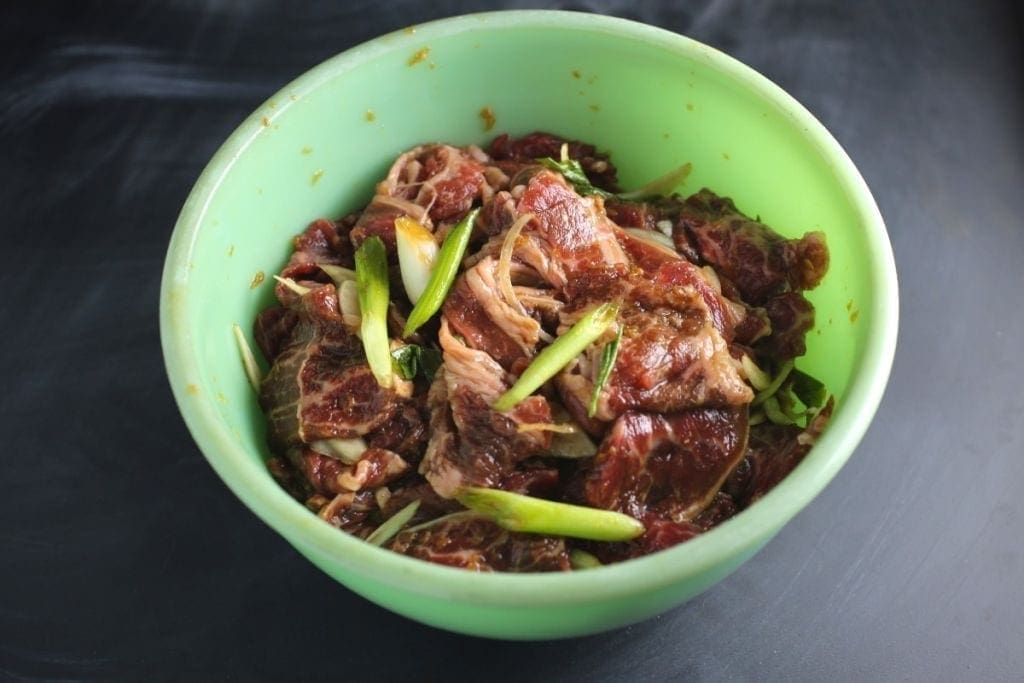 Mix the meat into the marinade very well and let it sit in the fridge for at least an hour.

We used a mixture of rib-eye (purchased pre-sliced from the Korean market), and boneless short ribs that we sliced ourselves. Both were great but I was surprised to find that we preferred the short rib. It had more flavor and a wonderful texture. Whatever cut you use, if you’re slicing it yourself, freeze it for 15 minutes (to make it easier to slice) and then cut it as thinly as you can against the grain. This is important because it makes chewy cuts of meat much more tender.

One of the nice things about this dish is that, once the meat is marinaded to your liking it literally takes minutes to cook. This is ideal for a dinner party because you can do all the work in advance and then just sear off the meat and you’re done.

You can serve Bulgogi just with a bowl of hot rice but I like to make lettuce cups and serve them with lots of vegetable side dishes. These are not the traditional dishes that come with Bulgogi (called banchan) but they are delicious nonetheless.

We served ours with:

Don’t forget to check out our Asian Pantry Basics page for descriptions and links to many of the ingredients used in this dish. 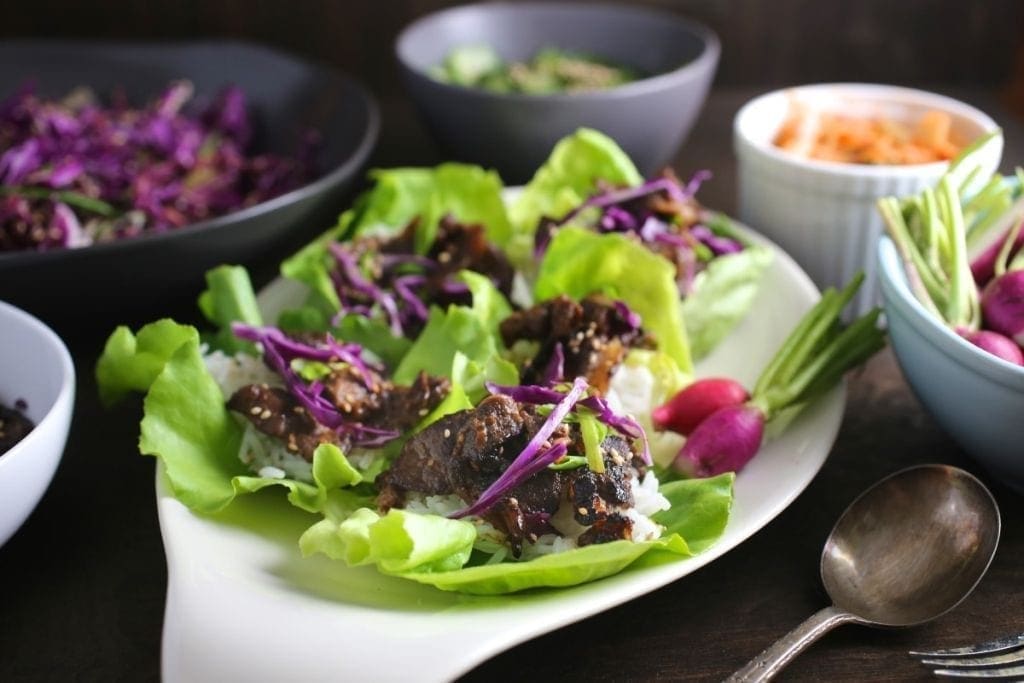 Save Print
Prep time
15 mins
Cook time
1 hour 30 mins
Total time
1 hour 45 mins
Author: Emily Clifton - Nerds with Knives
Serves: 4-6
Ingredients
For the marinade
For the lettuce wraps:
Instructions
Prep the meat: If slicing your own meat, placing it in the freezer for 20-30 minutes makes slicing easier. Trim the meat of excess fat and slice it as thinly as you can cutting against the grain. If using pre-sliced meat, just separate the pieces and dry them.
3.5.3226