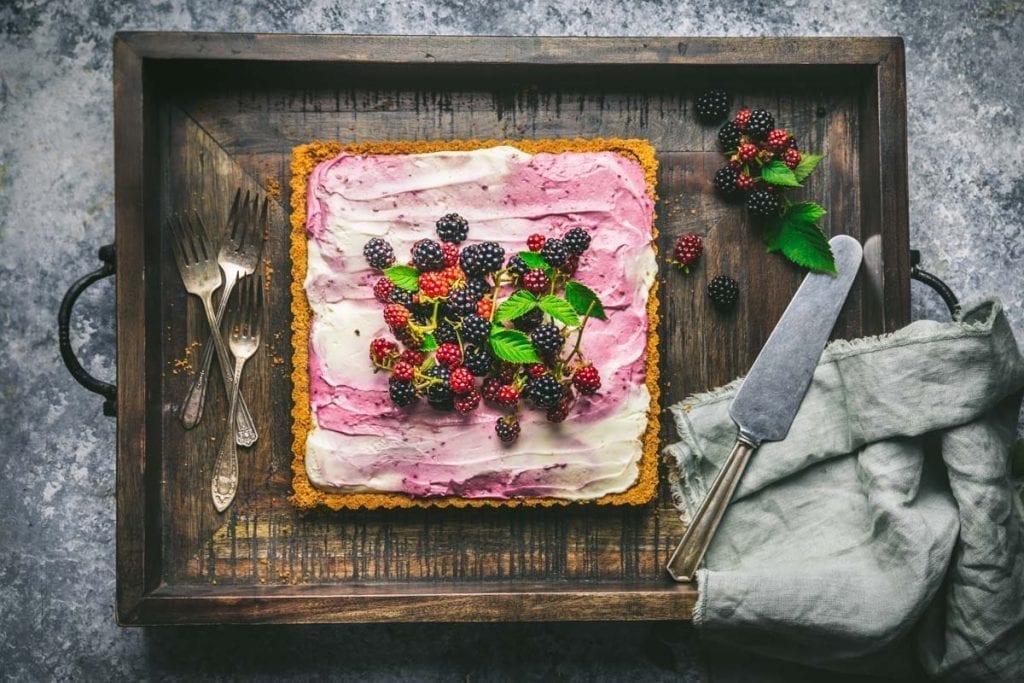 We call this “half-baked” instead of “no-bake” cheesecake, because the Graham cracker crust gets a few minutes in the oven, but the filling is the real prize: whipped vanilla and blackberry batters swirled into a beautiful pattern. Using freeze-dried berries lends stability and turns this into a year-round treat — though we love to top it with fresh berries to celebrate berry harvest season.

Even though we have a food blog (this. This what you’re reading now is a food blog. Honest to goodness it is.) we’re not great at keeping up with the regular “National FOOD THING Day” celebrations. Everything has a National Day. There’s a National Peanut Butter Day (March 1). A National Pickle Day (November 14). There’s even a day (August 16) which is simultaneously National Bratwurst Day and National Rum Day (if only someone would write a book which combines food and alcohol OH WAIT THEY DID). And last week, July 30, was National Cheesecake Day. 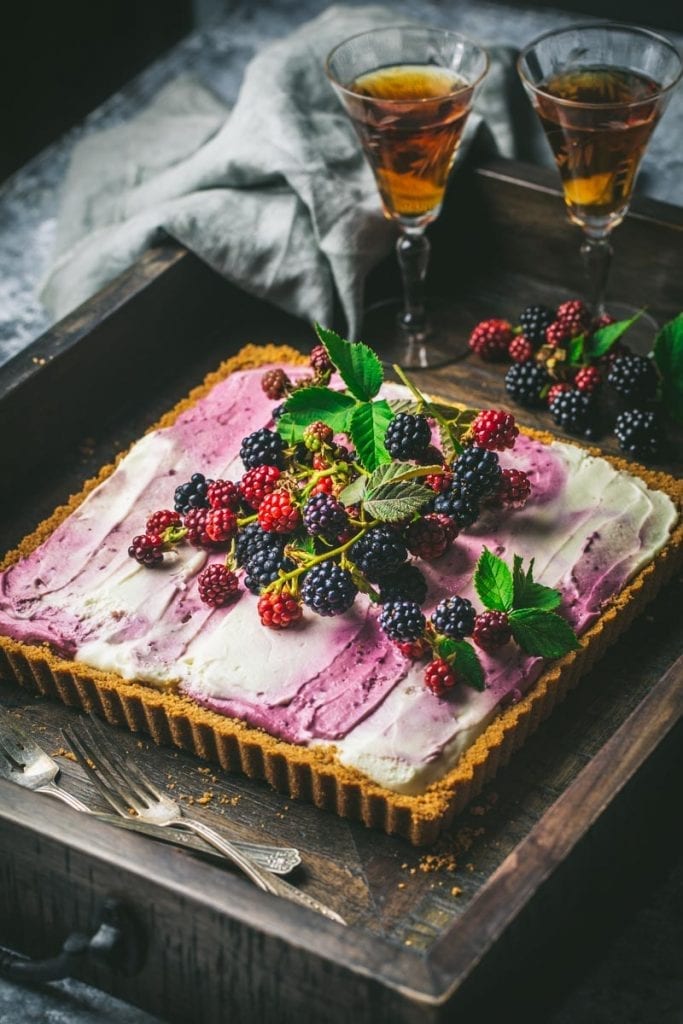 We both love cheesecake! We do! But we love it on our schedule, not when some faceless marketing bureaucrat tells us we gotta love it. So when National Cheesecake Day rolled around (well, to be honest, it was the day after that, or maybe even the day after that) we said to ourselves, “oh, we missed out on posting something appropriate”. We didn’t beat ourselves up too much though because we already had a no-bake cheesecake post all planned. We were just waiting for the blackberries on our fence to ripen.

Yes, you heard me, mate. Blackberries. Now, where I come from (this is Matt, by the way, so that would be England) blackberries are only ever to be found when going on a traipse. They are usually somewhere slightly inaccessible, such as along a narrow country lane, behind a spiderweb, guarded by thorns. Picking blackberries is therefore something of a test of character, like when Flash Gordon proves his courage and worth by sticking his hand into that hollow tree stump. Fortunately, there are now many excellent varieties of garden blackberry which are thornless. Last year we transplanted a cutting from a friend. The vines have gone gangbusters ever since, and this year will be our first fruit harvest.

This recipe is going to be online all year round, but of course good fresh blackberries aren’t going to be available to everyone at all times. We’ve adapted a recipe from this Serious Eats cheesecake, that uses freeze-dried berries in place of the fresh kind. This adds flavor, stability and gorgeous color without contributing additional liquid. We found Mother Earth Freeze-Dried Blackberries online (the same company also makes versions containing raspberries and blueberries, and you could use either in this recipe). 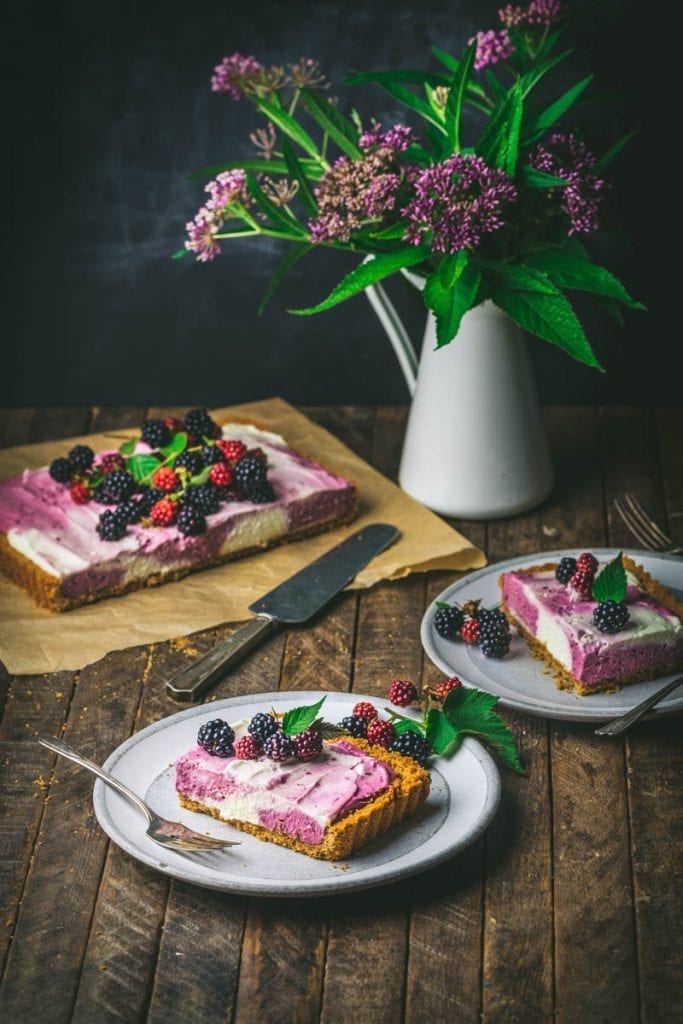 What is “Half Baked”?

Let’s talk about “half baked”. Most “traditional” cheesecakes (which include eggs in their batter) go through a baking process, which sets the custard. When we make this type of dessert, we generally use the water-bath method to ensure the cake cooks evenly and gently (you’ll find this method in both our Hazelnut Praline Cheesecake and Strawberry Rhubarb Cheesecake). We’ve also had success skipping the water bath entirely and letting the bake finish by turning the heat off and opening the oven door just a little. (This gentle reduction of heat helps prevent cracks in the cheesecake.)

Many of our other tart-type recipes are technically either no-bake or baked-crust. However, we’ve not yet formally presented something that we call a no-bake cheesecake … until now. A fully “no-bake cheesecake” combines a biscuit or cracker crust with a whipped filling. This comprises cream cheese, sugar, your choice of flavoring, and cream (to add air). Everything gets thoroughly chilled, for up to a day, to make sure that the dessert is fully set. Because there are no eggs at all in the batter, there’s no custard to be set through cooking.

In truth, the crust can go either way — using the same recipe, you can either choose to bake it, or leave it unbaked. The difference is that the crust will have a lightly toasted flavor, and will be much firmer in the baked version. Use either a 9-inch pie plate or tart pan.

There’s not a lot of butter in this crust, so make sure you firmly shape the crust base and walls with your fingers. This keeps it solid when you’re serving it. We’ve found that a biscuit/butter crust tends to puff a little in the middle, so to keep it flat, we cut a square of parchment to fit inside the crust walls, laid it over the base and then covered the parchment in dried beans (as baking weights).

And you only need to bake it for around 12 to 15 minutes and it’s done — leave it to cool on a rack, then carefully remove the beans (which can be re-used as baking weights, but don’t try to actually cook them to eat) and parchment, and wait until the crust is completely cooled to room temperature before filling it. 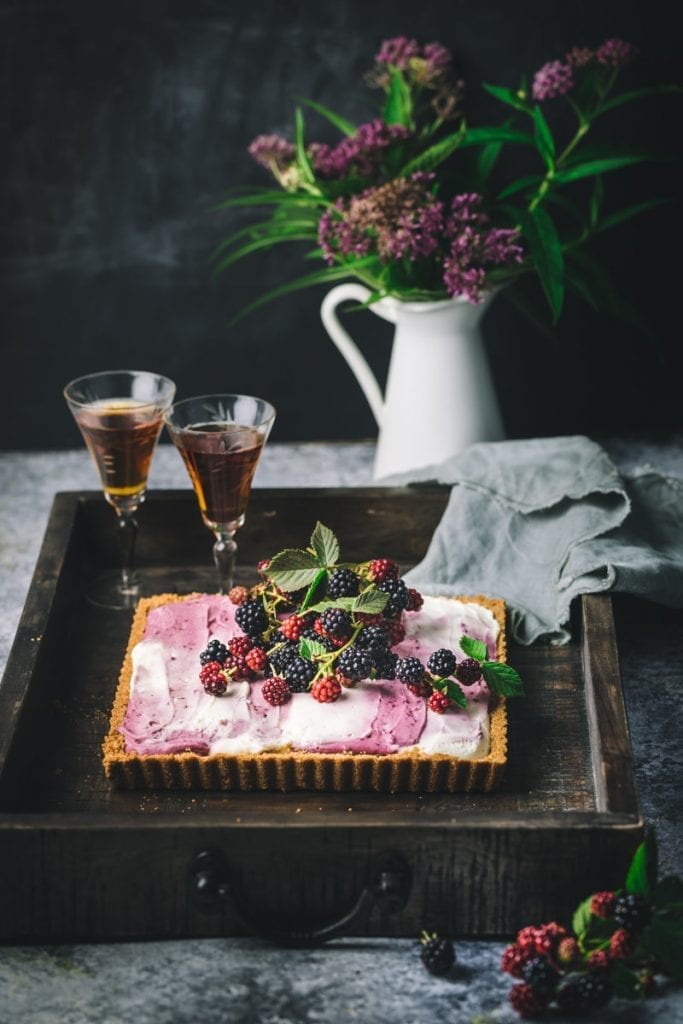 So let’s make the filling while the crust is cooling. It really couldn’t be easier. The two batters, one vanilla and one blackberry, are identical except for flavorings. And don’t forget, this is a no-bake cheesecake, so we need a filling that won’t need baking. We added vanilla to one, and ground freeze-dried berries and a little cardamom to the other. Start with the vanilla batter by adding half the cream cheese* (one 8oz block) to the bowl of a stand mixer fitted with the paddle attachment. Add half the sugar (6 tablespoons), and half the lemon juice (1 tablespoon), and the vanilla, and mix it on low speed until it comes together, then turn it up to medium until it becomes smooth and a little lighter in texture. Scrape down the sides as needed.

Switch to the whisk attachment and add half the cream (1 cup). Turn it on low until the cream is combined, then up to medium-high and let it whip until the mixture can hold stiff peaks. Depending on the power of your mixer, this can take 2 to 5 minutes. Transfer the batter to a bowl and set it aside while you make the blackberry filling.

To the bowl of a food processor, add the other 6 tablespoons of sugar and the dried blackberries. Process until the blackberries turn powdery and fine, about 2 minutes. Then repeat the same process as the vanilla version above, except adding 1/2 teaspoon of ground cardamom instead of vanilla. (The cardamom adds a lovely, subtle floral flavor).

Now you can fill the shell by adding heaping tablespoons of both batters in an alternating pattern. Swoop and swirl the dollops with the back of a tablespoon. Alternatively, drag an offset spatula over the top to make an ombré pattern (which we did). Cover the tart in plastic wrap and chill it in the refrigerator for at least 6 hours and up to overnight. To serve the no-bake cheesecake, top it with fresh berries.

We like using Philadelphia brand cream cheese, it has the best texture. We don’t recommend using the lower fat Neufchâtel because it won’t set enough. 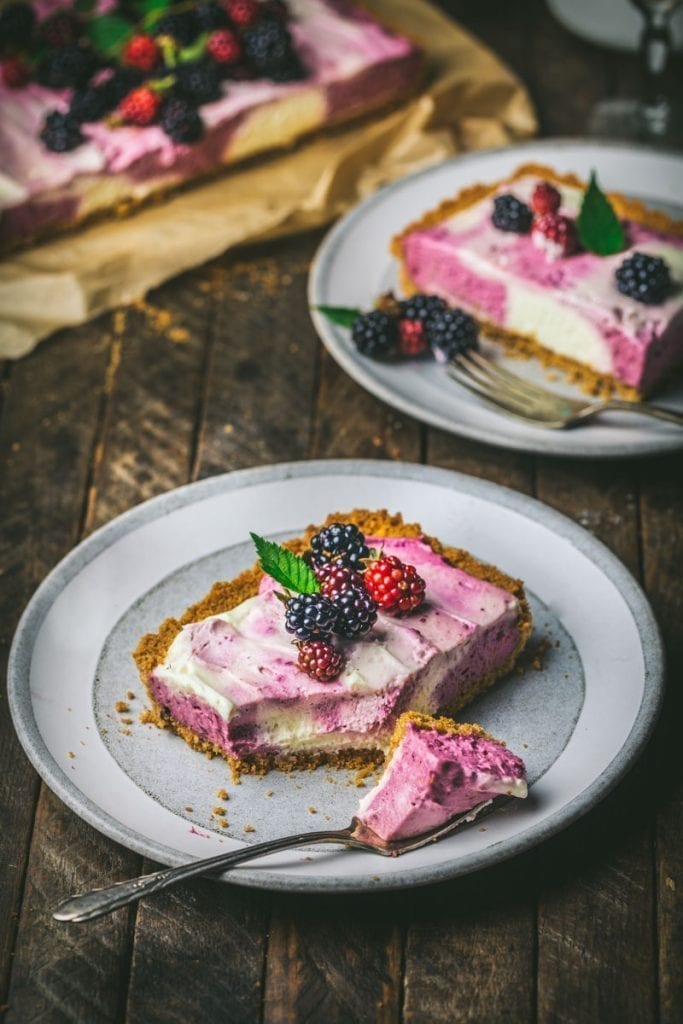 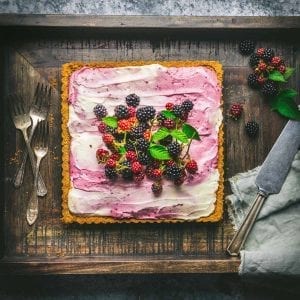