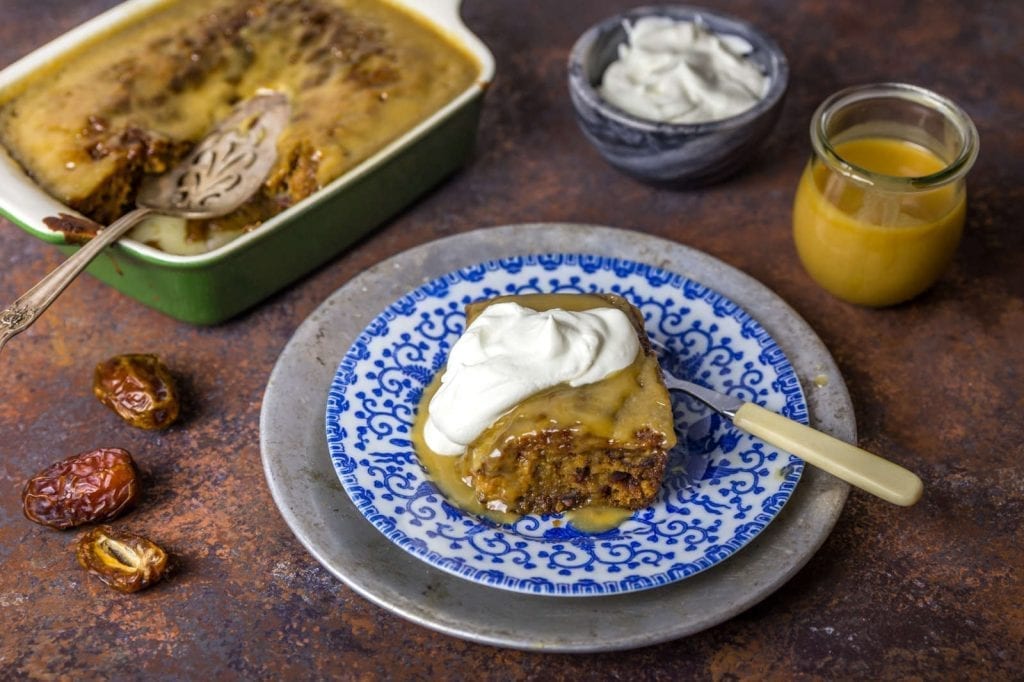 Sticky toffee pudding is a hallowed British dessert which translates to American as “warm date cake drizzled with toffee sauce”. Either way you say it, it’s a deliciously rich and comforting treat, perfect for a chilly evening.

This is a line that (I will pretend) gets thrown at me on a regular basis by drive-by shouters at Nerds Farm: “Oy, mate! You, nerd with knife! I thought you were British! Where’s the sticky toffee pudding, eh? Call yourself a food blog?” Well, firstly, no, I don’t call myself a food blog, and secondly, ha, joke’s on you, fella, because I’ve been making sticky toffee pudding on a weekly basis, and damn good pudding it’s been, too, I just haven’t blogged any of it. I’ve been told this kind of churlish behavior is unnecessarily cruel to our readers, so at last, here is the proof of the pudding, be it both sticky and toffee-flavored.

Before we talk pudding, I want to take a small digression on the subject of recipe inspiration and attribution. The notion of following an idea back to its source, like a detective tracking a series of clues, has always fascinated me. I love researching the history of children’s nursery rhymes, for example. I loved the thrill of finding out that “Ring a Ring o’ Roses” is about the Black Death. It was a comfort to find out that smashing the emptied shell of a boiled egg to stop witches sailing off in it isn’t just a thing that we do in my family, but is a shared inheritance from medieval superstition.

One of the original purposes of this blog was to try to record the recipes that had been used and tested by our families over the years, and while that original notion never quite came to pass (we did blog “gamush“, but both of Emily’s parents subsequently noted that we’d got the recipe all wrong), I still strive to keep an eye on where a recipe originates, and ensure that, where possible, we credit the inventor. 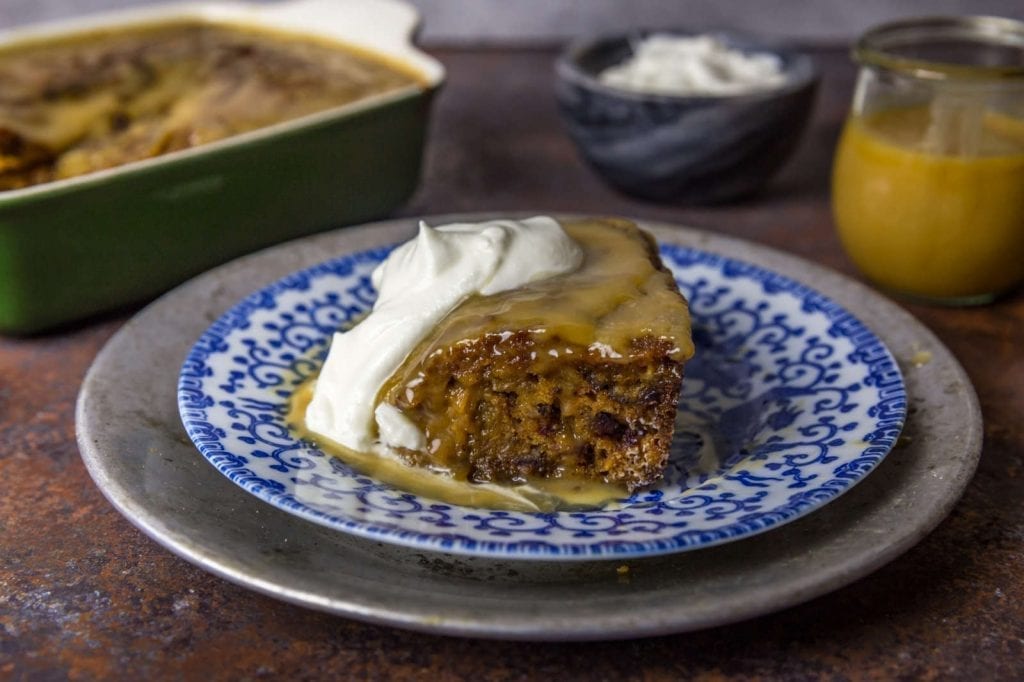 Essentially a “poke cake”, the warm cake is poked full of holes to allow the hot toffee sauce to soak into the sponge.

Of course, the old saying that there’s nothing new under the sun applies also to cooking. Unless you somehow invent a completely new food, most often you’re adapting an existing recipe. You could be changing proportions of ingredients here and there, or modifying it for current tastes and diets or your own locale. For example, using less sugar, more spice, or vice versa. Or you could add a fusion twist or somehow otherwise bring your own spin to someone else’s original. And even that source idea is, as often as not, inspired by shared culinary experience.

Speaking for ourselves, there are many cooks and chefs whose work we greatly admire; we often consult their books or websites to find a reliable recipe which we can work with and adapt. It won’t surprise you to know that our inspirations include Nigella Lawson, Nigel Slater, Jamie Oliver, Deb Perelman of Smitten Kitchen, Kenji Alt-Lopez and the good people at Serious Eats, Melissa Clark of the New York Times, and the recipe blogs at Bon Appetit and Epicurious, as well as fellow members of the food blogging community that we have come to call friends. 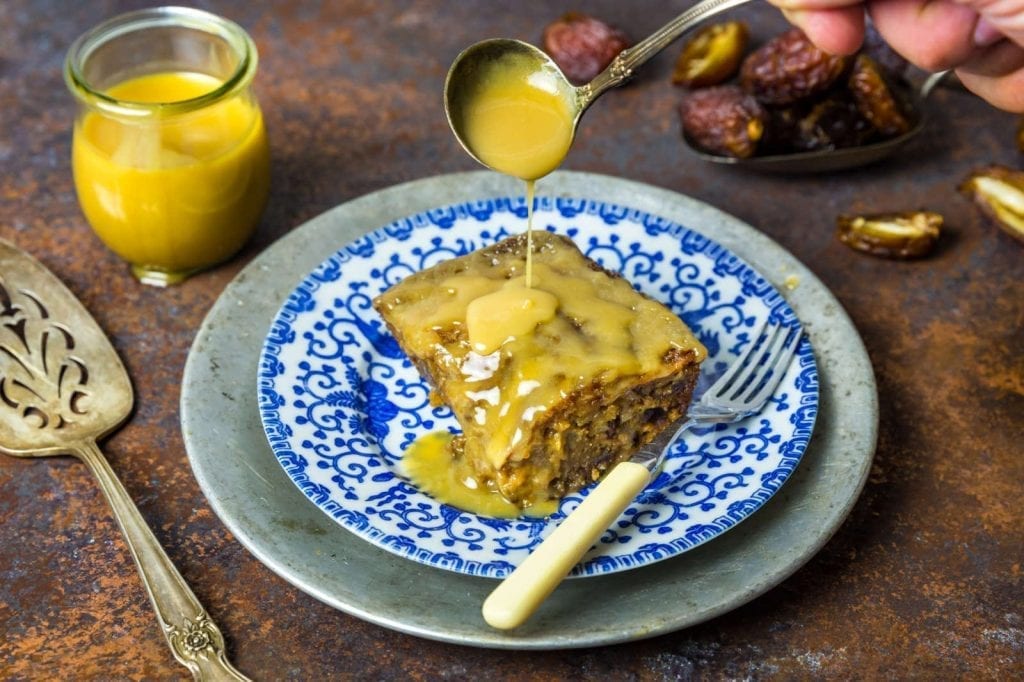 It’s all about that sauce.

So when it came to sourcing a recipe for sticky toffee pudding, we turned to our sources. Matt is an old Trotsky at heart, so naturally he first checked in on the “best of” recipe recaps in the Guardian, which have served us well in the past. In this case, Felicity Cloake’s “perfect sticky toffee pudding” took the best aspects of versions by Francis Coulson, Simon Hopkinson, Jamie Oliver and Tamasin Day-Lewis, and created, according to the author, a balanced dessert where the sugar is countered by nuts and spice.

The article also discussed the original conception of sticky toffee pudding – Francis Coulson’s Sharrow Bay Hotel certainly popularized it in Britain, but according to Hopkinson, Coulson’s version was based on an obscure printed recipe from a Lancastrian home cook named Mrs Martin, which had originally been sent to her from a friend in Canada.

Leaving that murky history behind for a moment, let’s follow Emily’s inspirational journey. She first dipped into Smitten Kitchen’s version, which was actually adapted from Karen Mordechai’s Sunday Suppers cookbook. Karen herself referenced the date cake at Williamsburg’s Moto restaurant (now called Bar Velo). We’re out of the Brooklyn scene these days, but apparently, this cake is worshipped by all who’ve had it. Several blogs offered essentially the same ingredients and process, oscillating between calling it “date cake” and “sticky toffee pudding”. Most end up with a moist, dark date-infused sponge topped with a butterscotch / dulce de leche sauce.

So here’s our version. We took the bones from the Martin original (as adapted by Hopkinson), and simplified it a little. Then we fleshed it out with Smitten Kitchen’s sensibilities (and sensible use of salt!) and present it to you. Sticky toffee pudding, or date cake, with contributions from … well, pretty much everyone. 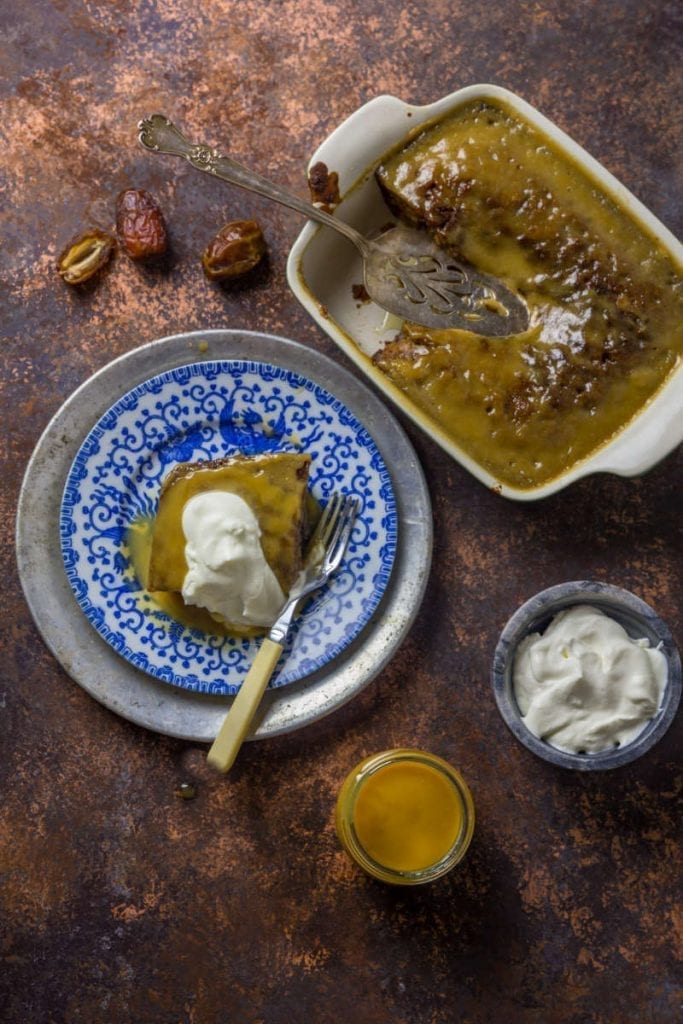 Serve it with whipped cream or vanilla ice cream.

We had a choice of both “regular” (dried and pitted) dates and Medjool versions. On a blind taste test, we honestly couldn’t detect any difference, so use whatever dates you have, and don’t feel you have to break the bank with fancy varieties.

Second, this dish is unapologetic-ally reliant on sugar, and some recipes call for muscavado (very dark, moist unrefined sugar). Most store-bought light and dark brown sugar are refined sugar with varying amounts of molasses added in. The higher the molasses content, the wetter (and stickier!) your pudding will turn out. In fact, depending on the moisture content, your oven, and the baking time, your final dessert dish may lean more toward a pudding or a cake. (We like to feel that it happily straddles the line.) Muscavado isn’t available in all stores, and can be expensive. We substituted a mixture of dark brown sugar and molasses, and it works very well.

There you have it: finally, a sticky toffee pudding recipe. Or a recipe for warm date cake! Whatever side of the Atlantic you make it on, know that your dinner guests will sing your praises forever. If they can get up out of their chairs afterwards. 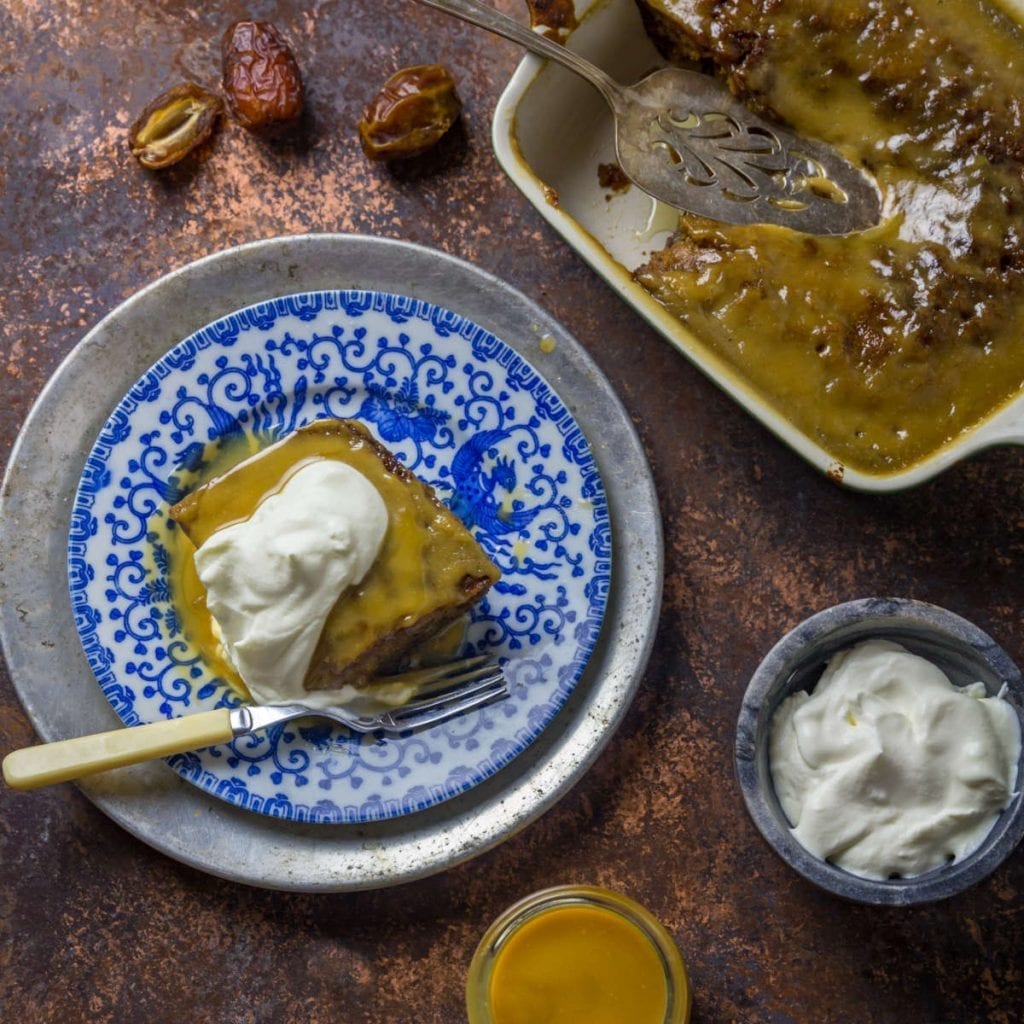