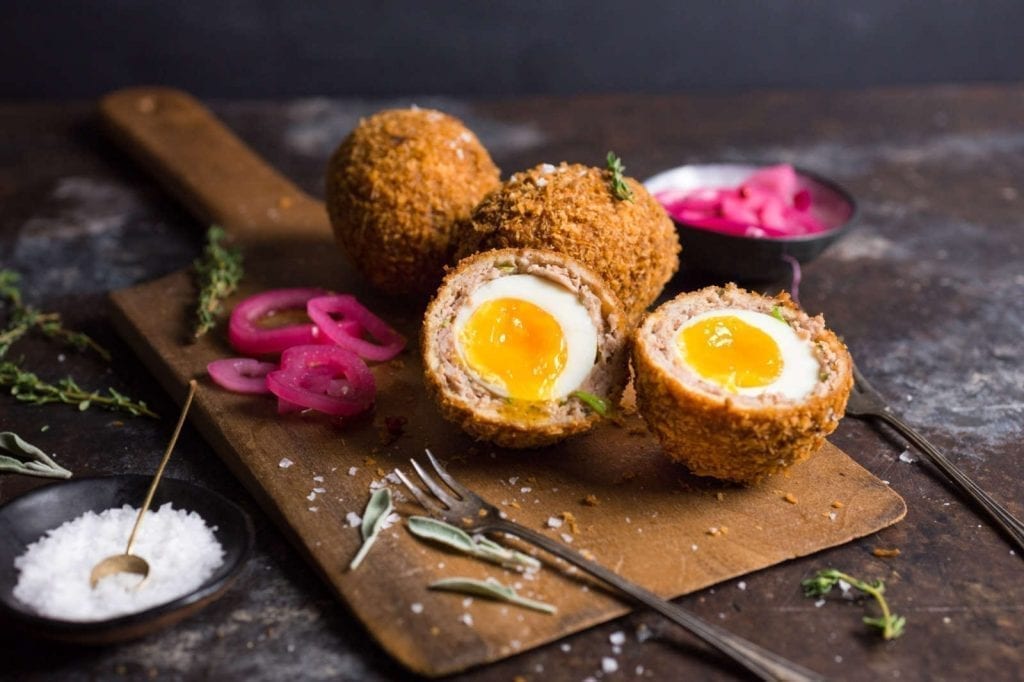 A perfect Scotch Egg has a crisp golden shell, flavorful sausage and most importantly, a soft-boiled, runny-yolked egg. This just might be the ideal portable picnic snack – that we’d be happy to eat anywhere, even the dining table.

Every country and cuisine has its convenience food: the dish that’s so ubiquitous – it’s in the supermarket, the corner store, the petrol station – why would you ever bother making it yourself? For Britain, I think that food is the Scotch egg. A soft-boiled (or, occasionally, hard-boiled: let’s talk about that below) egg wrapped in layers of sausage meat and breadcrumbs and deep fried.

All the component parts sound like they should fit together beautifully, and indeed they do – if your recipe is good. Too often, something goes wrong – the egg is overcooked and ends up with a chalky or green-ringed yolk, the pork is insufficiently seasoned and bland, the crumb coat is soggy. It’s easy to throw up your hands and say, well, what can you do, it’s just a Scotch egg. And then we had a quail’s egg version at our favorite restaurant in Wales, Llys Meddyg, and here’s what happened to our minds.

OK, admittedly, we were on our honeymoon, and we had had a good amount of whisky at that point, but this was genuinely a turning point in our appreciation of the humble Scotch egg. The outside was beautifully crispy, to the point where you could almost crack it with a knife. The pork layer was rich and tasty – I wouldn’t be surprised if it was mixed with a little black pudding. And the egg was warm and gooey and – did I mention? – was of the teeny tiny quail persuasion. So yeah, that was a bit of magic on a plate.

Admittedly, I haven’t eaten a “native” Scotch egg in years, so I wanted to refresh my memory of what kind of quality item you might find packaged in the chilled goods section of your local Tesco Metro. So I asked my Mum.

This is what she said, verbatim. “You go to the shop, and you’re peckish and think, ooh, I really fancy one of those, so you take it home and have one bite, and then you say to yourself I really wish I hadn’t bought this, it’s absolutely disgusting. That’s horrible.” 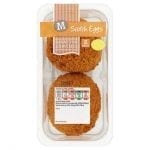 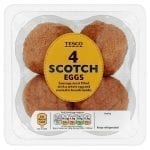 I don’t know why we had never got around to making our own. It’s not like we’re ever short of eggs. 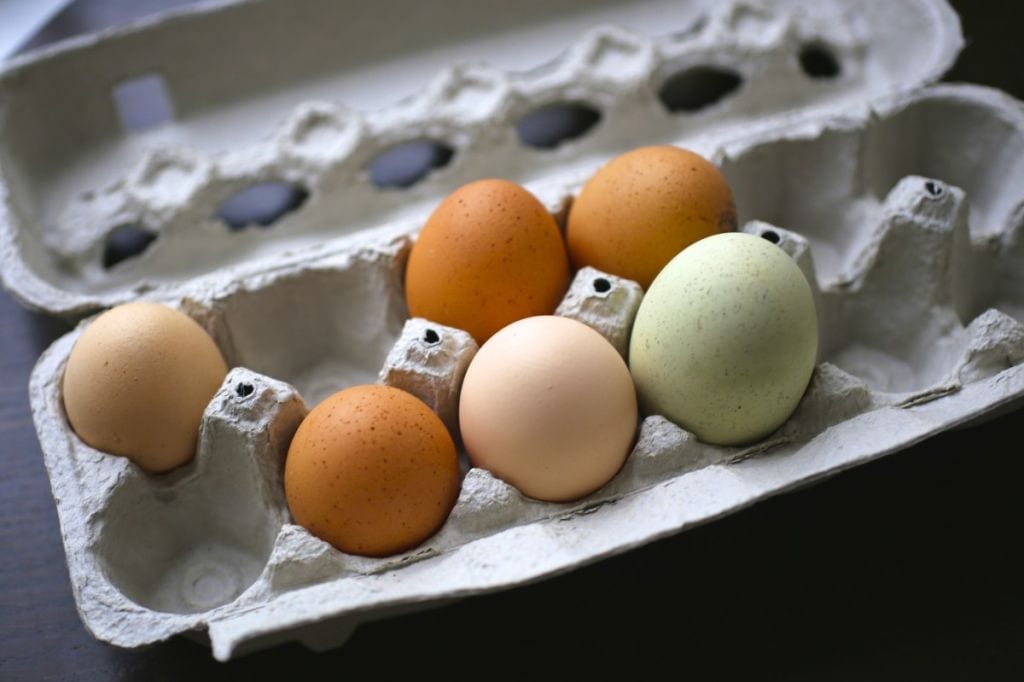 Okay, so onto the recipe. Here’s how we approached these beauties. First, we wanted to make sure we cooked the eggs perfectly. We started with extra-large eggs placed in a pot with cold water to cover by an inch. Once the water boiled, we dropped the heat to low and simmered them for exactly four minutes. When they were done, we immediately removed them into an ice bath and let them sit until they were cool – a good 10-15 minutes. And then we gently peeled them. (This can be done up to a day ahead).

(TIP: Older eggs will be easier to peel than younger eggs since they develop an air pocket between the shell and the white, so if you have a choice of eggs, go with the older ones for this recipe.)

Most recipes for Scotch Eggs call for an all-sausage wrap but we found that can make the eggs a little greasy so we went with a mix of breakfast sausage (taken out of its casing) and ground pork. The ground pork is leaner and a little more coarse, so the combination is just perfect.

The meat is then seasoned with mustard, as well as a mix of fresh herbs (you can use whatever you like but we went with chives, thyme, sage and parsley). We also like to add a little freshly ground nutmeg – this adds a really nice warmth, though it’s not a crime if you leave it out. Mix the meat and seasonings well, then divide it into 8 balls. You can put them in the fridge while you prepare the coatings. You’ll need three shallow bowls for your coatings: seasoned flour, egg (with a little milk), and breadcrumbs. We use panko for almost every recipe that calls for breadcrumbs since we love the coarse texture and crispness of the resulting coating. If you prefer to use regular breadcrumbs, we recommend you look for unseasoned (i.e., without any dried herb flavors).

Once the eggs are peeled and the pork is ready, it’s time for them to combine forces. Take one pork ball and gently flatten it between two approx. 8″ pieces of cling wrap. You can use your hands or a roller. You’ll want to end up with a shape large enough to cover the egg, so it should be 1/4 to 1/2″ thick (and as even as you can get it without too much stress). Once it’s ready, peel off the top layer of cling wrap.

Roll an egg in flour and place it in the center of the sausage, and lift up the cling wrap to roll the meat layer around the egg evenly, closing up the gaps with your fingers. You can use damp hands to coax it into a smooth egg shape.

Next, roll the covered egg in flour, shake off any excess, and dip in the egg/milk mixture to coat thoroughly, dip into the breadcrumbs to coat, and then give it one more round of egg/milk and breadcrumbs. YES TWO LAYERS OF BREADCRUMBS! This is vital and should not be skipped if you want really crunchy, crispy Scotch Eggs.

Shake off any loose crumbs and set all your coated eggs on a tray. Have another tray with a cooling rack set atop it – this is for the fried Scotch eggs to catch any oil drips.

Prepare a deep fat fryer or a medium-large (3-quart) pot with neutral cooking oil, filled with at least 3 inches of oil (but make sure not to fill it more than halfway). Heat the oil to 350ºF/175ºc. Carefully lower in two eggs, one at a time (don’t crowd the pot – you don’t want the temperature to drop too much). Fry for 5 – 7 minutes, turning them gently in the oil every so often (we found 6 minutes was perfect). When the eggs are a deep golden brown and have mostly stopped bubbling, remove them with a spider or slotted spoon and place them onto the cooling rack. Check the oil temperature before you add the next batch – make sure it returns to 350ºF.

Scotch Eggs can be eaten hot, warm or room temperature. (Keep any uneaten eggs refrigerated and they should last 4-5 days.) We like to serve them with a good sprinkle of flaky sea salt (our favorite is Maldon) and some Quick-Pickled Red Onions.

Follow our tips on how to cook the perfect Scotch Egg. It’s easier than you think!

Slice in half and marvel at the perfect runny yolks! This is exactly what we were after, not so liquid that they run everywhere, but gently oozing, with an almost pudding-like softness.

These Scotch eggs should stay runny even a few days later. You will be the hero of your next picnic! Well, to be honest it’ll be between you and the guy who individually punches wasps in the nose. I love that guy.

4.8 from 6 reviews
Scotch Eggs with a Perfect Runny Yolk