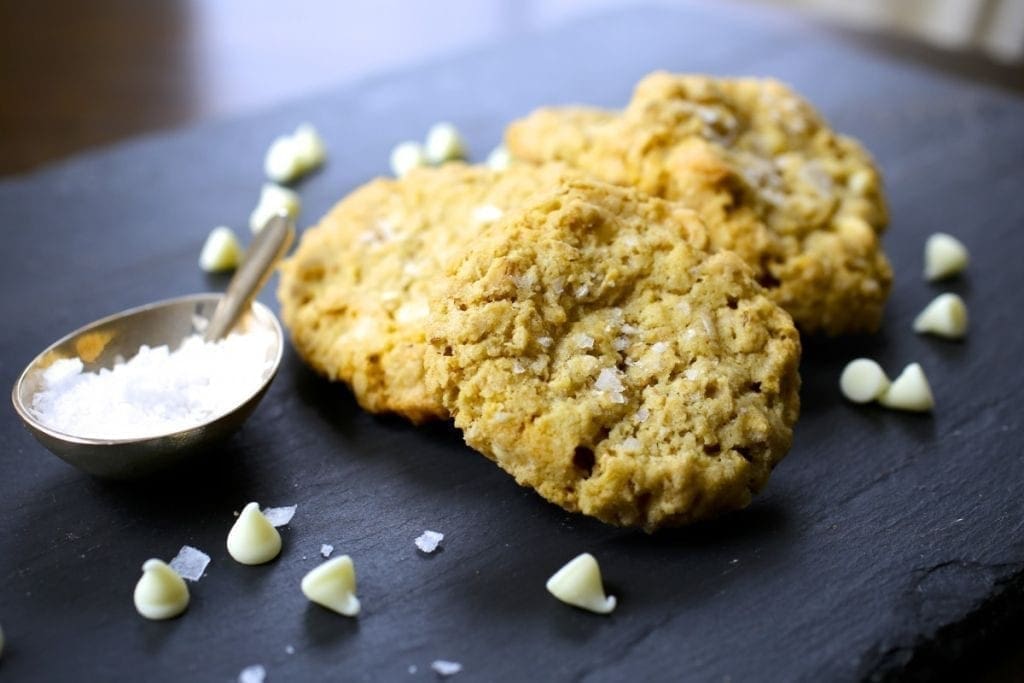 I don’t remember having cookies when I was growing up in Britain in the 1970s. I don’t mean to say that they didn’t exist; in all probability they were around, but in the country’s crowded biscuit industry, with its Bourbons, its  Garibaldis, and Custard Creams, its Jammie Dodgers and digestives of both plain and chocolate variety, its Rich Teas, Penguins, and Jaffa Cakes, there seemed to be no great need for American imported options. Biscuits are great, though, you can have them all year round, they have absolutely no health benefits, and you’re allowed twice as many at Christmas, because of course that’s the time when everyone is a bit low on fat and carbs.

There are plenty of sweet baked items you can make at home, of course, but nobody makes biscuits; there’d be no point. And you see, that’s my socialist English upbringing again; of course, in America, you dream, you aspire, and yes, you SHALL make cookies, and take them to the moon, too, dammit. But the same principles apply: they’re not in any way seasonal, and people like to make twice as many during the winter months.

Good thing, then, that just before Spring leapt into the calendar and stole an hour from us, last week I decided to make cookies. To tell the truth, I believe the conversation in the house went something like this:

Me: Do we have any cookies in the house?

Emily: I don’t think so, but you could make some! And blog it.

Me: Can’t argue with that.

Emily: And blog it. So, this recipe is from Cook’s Illustrated via Deb Perelman’s Smitten Kitchen, a site that we refer to on a regular basis. (True story: we made her Dulce de Leche Cheesecake Squares for Sam Raimi once. I mean they weren’t ONLY for Sam Raimi, but he did reportedly enjoy them.)

I’m frequently in awe of Deb’s recipes and results; for these cookies, she rightly recommends finding good-quality white chocolate bars/pieces. Now, I have a confession to make, and in the absence of an actual priest, you, the Internet, will have to do. I have made these cookies twice, and both times, I’ve merrily used Nestlé’s “white chocolate” morsels. You know what I’m talking about – the little white chips in a yellow bag. I’ve surrounded “white chocolate” in quotation marks not because that’s what Nestlé calls them, because they don’t. That’s what I called them. What Nestlé calls them is “premier white morsels”. I don’t work in marketing, but I can see what they did there.

I mean, nobody expects white chocolate to be actual chocolate, it doesn’t contain any cocoa solids, and that’s fine, but what you might expect is that a white-chocolate-like product contains at least some cocoa butter. 20% of it, in fact, by law. But no: Nestlé’s “premier white morsels” contain no cocoa butter at all. Neither does Ghirardelli’s, which surprised me. Both replace the cocoa butter with palm oil, and although there’s no rational reason for me to trust one fat over the other, I’d rather have real fake chocolate than fake fake chocolate. (My sense of reality is spurious enough, thank you very much.)

I mean, these cookies are good, don’t get me wrong. I would not kick these cookies out of bed. But the next time I make them I’ll find the real deal. I mean, heaven forbid I put anything unhealthy in my cookies. Right? 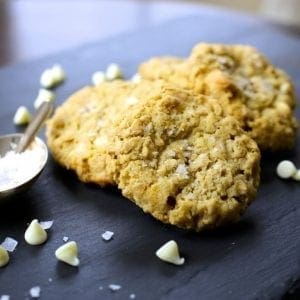