The first thing that every schoolchild learns about King Alfred is that he burned some loaves. The history books clearly could not come to an agreement on what Alfred actually looked like, but they all agreed that he was a big old loaf-burner. 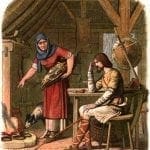 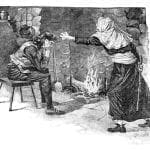 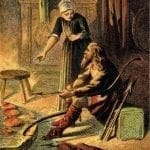 The schoolchild later, of course, goes on to learn about Alfred’s leadership of the Anglo-Saxons, his fortification of London and his effective resistance against the Danish incursions of England in the 9th century AD, but the first thought that gets dredged up at the mention of his name is, inevitably, “That Alfred, eh, couldn’t even work an oven properly”.

Which goes to show two things.

First, don’t leave a king to do a baker’s work, he’s going to have his mind thoroughly busy with keeping the Vikings out of Mercia, of course he’s not going to pay attention to mundane culinary matters. And secondly, it doesn’t matter how effective you are in your chosen career (eg, King of England), everyone’s going to remember that one time you ruined a batch of bread.

Which brings me to the subject of today’s post. 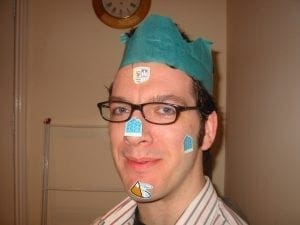 Quite similar to King Alfred in a number of ways

One of the many, many ways I am similar to King Alfred (see right) is that the simplest things bring me the most anxiety. A big, complicated problem like the defense of the realm, or, I don’t know, building a henhouse (which I think is actually more difficult, isn’t it, in a way?), can at least be broken down into many smaller, more manageable tasks.

But give me a single, very simple thing to do, and I freeze. I distrust the apparent simplicity. I believe there has to be more behind it than the obvious. I overestimate the risk of the thing. I stay in my comfort zone. I mentally burn the bread.

This is a very roundabout way to saying that, before last week, I had never made a loaf of bread in my adult life. I simply hadn’t ever got around to doing it. Emily would always say “Matt’s a brilliant baker!” and I would smile but feel like a fraud because I frankly hadn’t looked at a packet of yeast since I was at school. (I think I was trying to make elderberry wine. If only I had done more than simply look at the packet of yeast, it might have been rather nice elderberry wine.)

And of course, for most people, bread is the most convenient purchase imaginable. You can buy it at a gas station, for God’s sake. We get a great oat multigrain from our town baker, “All You Knead”. So why bother with the mess, the hours of preparation, the damn kneading? Why, in short, would I suddenly decide to start making bread?

There’s a Glaswegian comedian called Limmy whose show I’ve caught online, he’s a funny man, you should check out his stuff. Anyway, I follow him on Twitter, and he talks a lot about depression and anxiety and using meditative techniques to manage his mood. And he bakes a lot of bread, and he posts pictures of it. And I was scrolling through my timeline, looking at these impressive peasant loaves, and I suppose I didn’t have a lot to do that day, and I thought to myself, you know what, I’m clever, I can do that.

“But what about the kneading!” (complained my inner voice) “The incessant kneading! How will I, with my feeble upper body strength and poor attention span, perform such barbaric peasantry? This is not Downton Abbey.”

Delia Smith, in her 1984 edition of “Complete Cookery Course”, extolled the merits of a lengthy hand-kneading process and decried the use of a food mixer as a crutch for the “weak and lazy”. So imagine my surprise when Cooks Illustrated’s “Baking Illustrated” (yes, it’s illustrated) told me that, actually, kneading dough in a Kitchenaid mixer was superior to hand kneading. I’m not knocking hand kneading, and I think it has the potential to be quite a meditative exercise if you’re in that mood. I just don’t have much counter space. Plus, of course, the feeble upper-body strength and poor attention sp … oh, nice shoes.

I’ve now made three types of loaf — American sandwich, wheat, and anadama (a mix of wheat flour and corn meal) — and what have I learned? How to make bread, yes, but that’s not really the important thing. 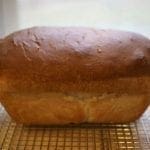 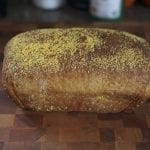 I’ve learned that you have to burn the bread to know how not to burn the bread. Or to put it a different way, you don’t necessarily have to conquer your fears by going bungee-jumping or doing public speaking. Just taking a small step out of your comfort zone is the best way to make your comfort zone bigger. You see, cookery and zen koans, all for no extra charge, don’t say we never give you anything.

I’m not going to include any recipes in this post because they’re easy enough to find, and, frankly, I won’t insult your intelligence. If you are new, like me, to the bready arts, a plain white sandwich loaf seems to be a good place to start, and you’ll need unbleached flour, butter, whole milk, honey or sugar, quick yeast and a loaf pan. And about two or three hours for rising and baking time. And, if your triceps are as underdeveloped as mine, a stand mixer with a dough hook.

Go and make some. Bake some loaves, burn some, drop some, give some to the dog, doesn’t matter, you’ll get there.

And if you have more experience with baking, do post a comment and let me know the most important lesson that you’ve learned. Or if you have a great recipe that you’d like to share.

And, finally, if you’re King Alfred … look, mate, we understand. Vikings. In Mercia. Anyone would be preoccupied. But next time, can I recommend an oven timer.