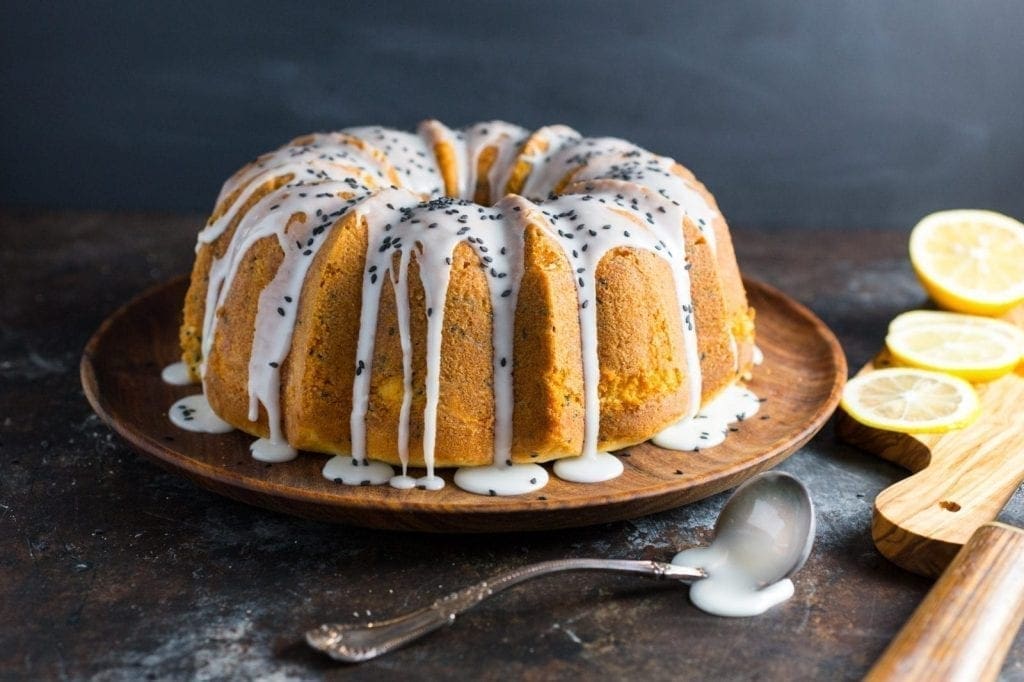 Lemon Sesame Seed Pound Cake! An unconventional combination which really works. Buttermilk keeps the cake tender, and lemon in the cake, syrup and glaze gives it a triple lemon tang.

I discovered this afternoon why I love buttermilk.

At my grandparents’ house, the small conservatory at the back was where we’d hang out on a summer’s day. It was walled with sofas, chairs and cabinets, as well as their vinyl collection and record player. I didn’t have any interest in most of the music, but they also had some comedy records — daft 1950s British singles by Peter Sellers, Bernard Cribbins and Terry Scott — and a couple of American albums, one of which included Bob Newhart’s one-sided telephone conversations. In retrospect, it was probably the first time I’d heard a genuine American accent other than on the occasional episode of Dallas or Dynasty. The last joke on the Bob Newhart* album was just called “Buttermilk” and was about 20 seconds long and went like this: “I discovered this afternoon … (pause) … why … (pause) I don’t like buttermilk.” (Long pause for laughter) “… It’s the way the glass looks when you’re through drinking it.” 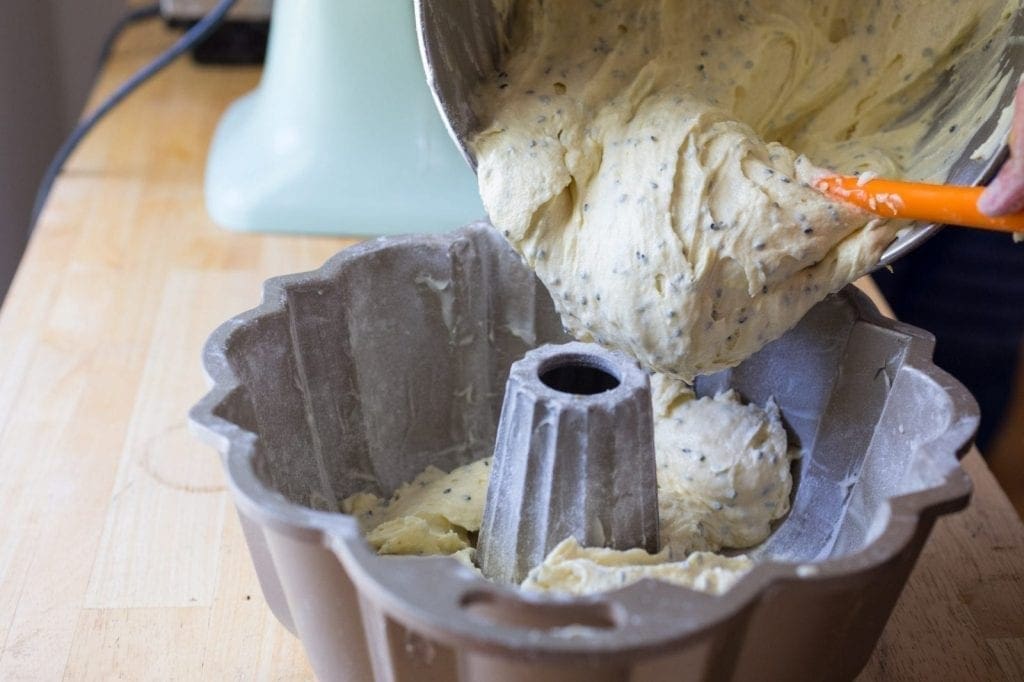 A quarter cup of seeds give the batter a little crunch.

I thought this was hilarious in 1978 or whenever it was that I first heard it, and would repeat it verbatim to my parents and friends, even though I had no idea what buttermilk was, had never seen or tasted it, and my family, as far as I know, had never bought it or used it in a recipe. Of course, I was a kid, and everyone of a cooking age may well have been using the stuff constantly in the kitchen for all I know. In any case, I never encountered it until I moved to the US.

(* Of course now we live in the age of instant internet research and recall, I’ve just spent a few minutes searching for “the Bob Newhart buttermilk joke” and found that it wasn’t Bob Newhart at all, but Shelley Berman.) 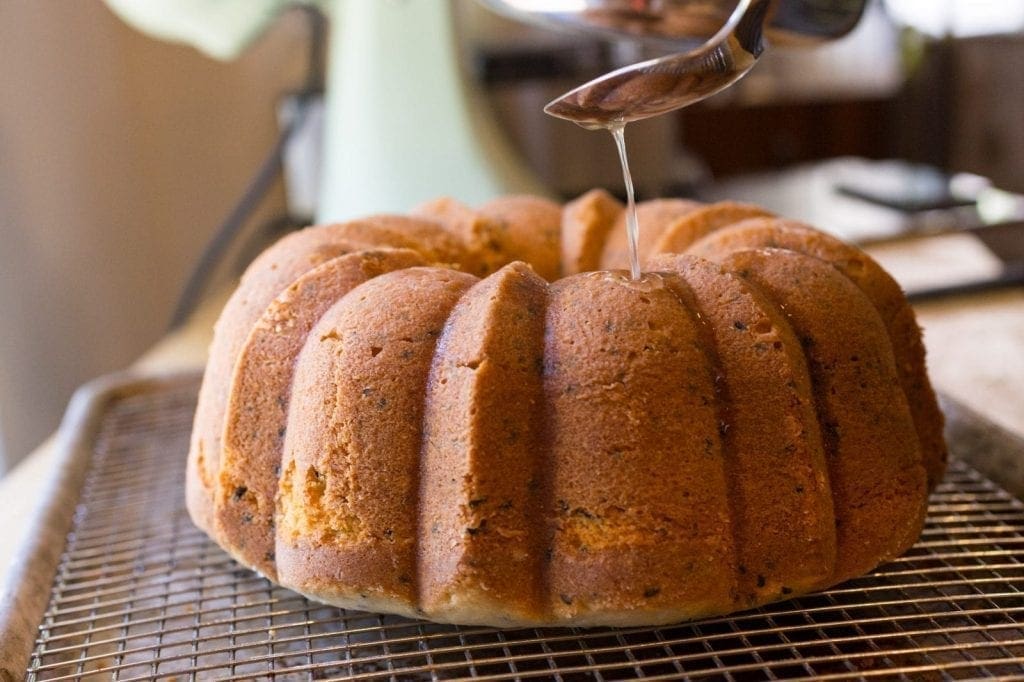 A drizzle of lemon simple syrup boosts the citrus flavor and keeps the cake exceptionally moist.

Since then, I’m a convert, and we use it all the time in baking – particularly in recipes risen with baking soda such as Ramp and Cheddar Biscuits and Key Lime Cupcakes, as well as as a batter ingredient in this Ultimate Fried Chicken Sandwich. We almost exclusively use Kate’s Real Buttermilk which is an old-fashioned cultured hormone-free milk, it’s fantastic stuff, and they’re not even sending us free buttermilk for saying so (although, Kate, if you’re reading, we love you, call us).

If you can’t find good buttermilk, you can make it yourself: just put a tablespoon of lemon juice or white vinegar in a measuring cup and add enough milk to make it equal 1 cup. Let it sit for 5-10 minutes while you prep the rest of the recipe. You can find this method and several other methods for making buttermilk at Olivia Rose’s recipe blog My King Cook. 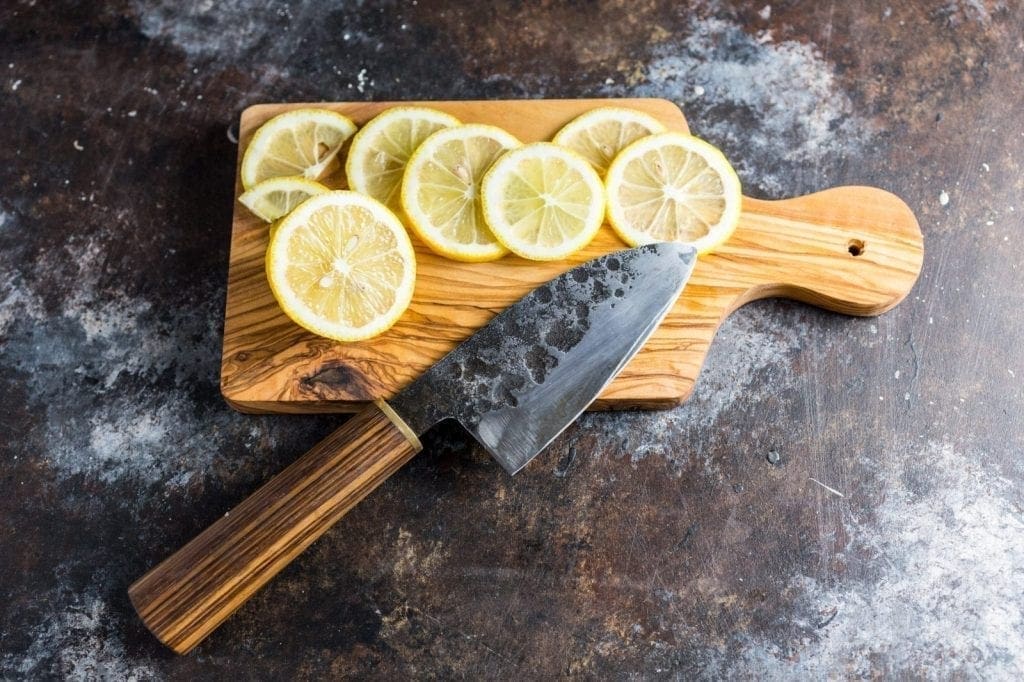 Look at this handmade Japanese knife!

Quick aside from Emily: Look at this insanely beautiful Japanese knife HANDMADE by my brother Alex. Long story short, a package arrives in the mail – no note – just a large knife wrapped in a thin layer of bubble wrap. Some might find this threatening but not us, we’re freaking psyched! Not only is it gorgeous but it sliced through these lemons like they were butter. Okay, back to our regularly scheduled cake post… 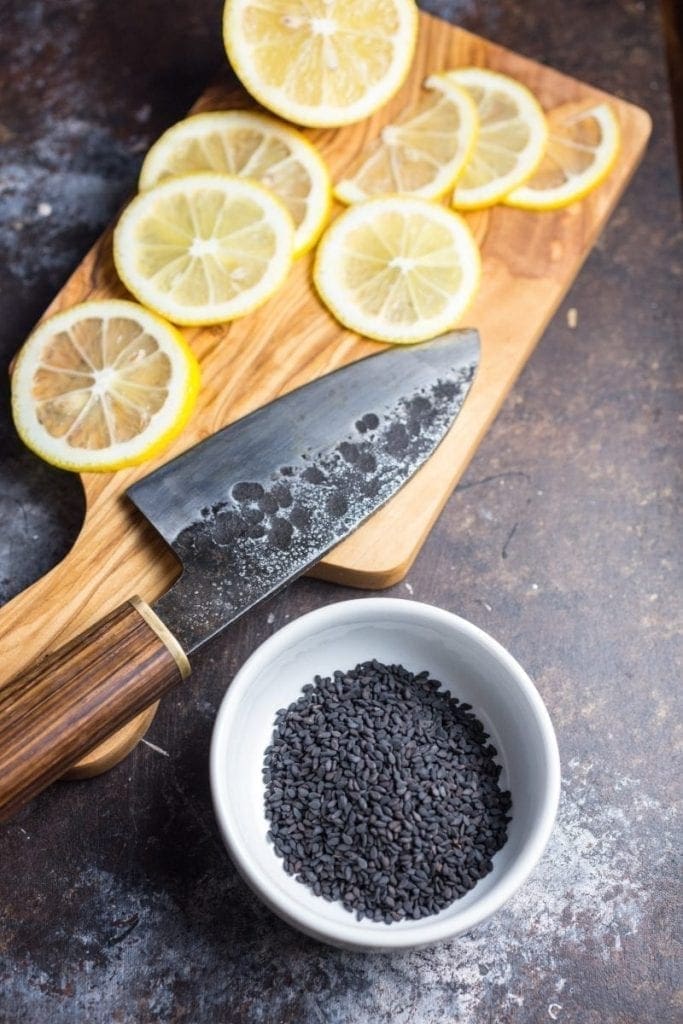 Sesame seeds take the place of poppy seeds in this cake, giving it more of a crunch.

We needed to bring a dessert to friends we were visiting last weekend: something we could make a day ahead and that would travel well. We knew that a pound cake would work very well, and we happened to have a fridge drawer filled with lemons left over from a few days of lemon curd making. Lemon and poppyseed is a classic combination, but we had just bought a large bag of black sesame seeds from our local Asian market, and Emily had the inspired idea to combine them. So lemon sesame seed pound cake it is. 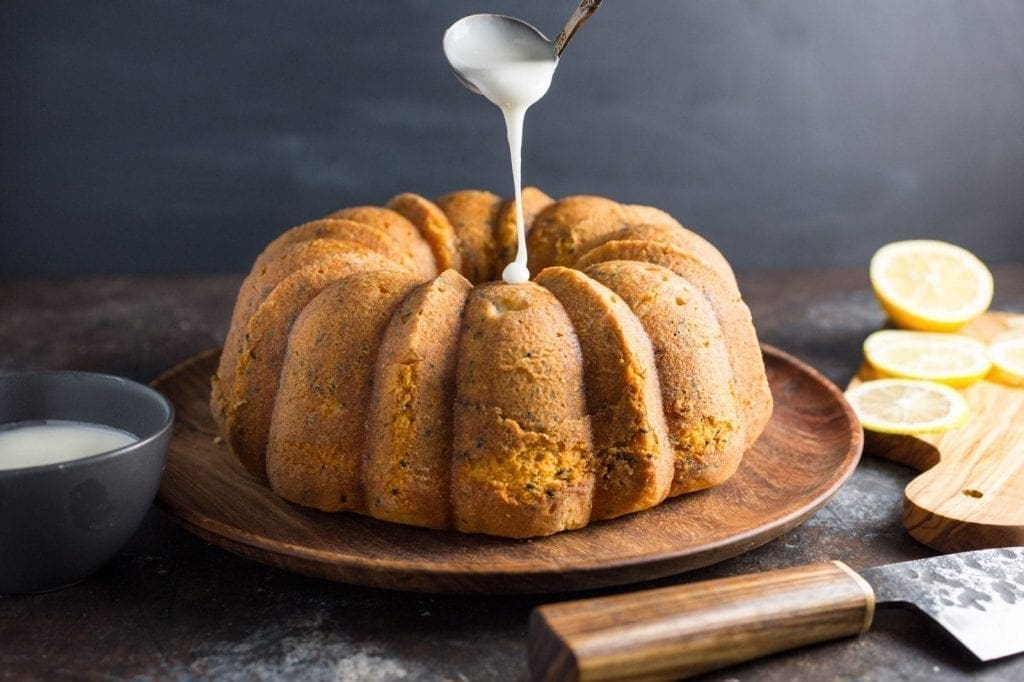 The final glaze adds another layer of lemony flavor.

The recipe has three components, but it’s really straightforward and you don’t need to sweat it. The usual cake-making approaches will apply: don’t over-mix the batter once the dry and wet ingredients are combined, and don’t over-bake it (we suggest 75m but you can check after an hour). Like with all Bundt cakes, butter and flour the tin very well if you’d like to get the cake out with a minimum of stress. Pound cake will actually have a more elegant texture and more complex taste after resting for a day, so make it the day before you plan to serve up.

You’ll also notice that this recipe calls for both butter and vegetable shortening (our version is adapted from the famous Cruze Farm recipe via the New York Times). You can use all butter if you like but the shortening results in a tender, more lightly-textured cake. Shortening contains no water and has a higher melting point than butter, which allows the eggs and flour time to puff up. Of course, it also has no flavor which is why you want to use at least half butter. 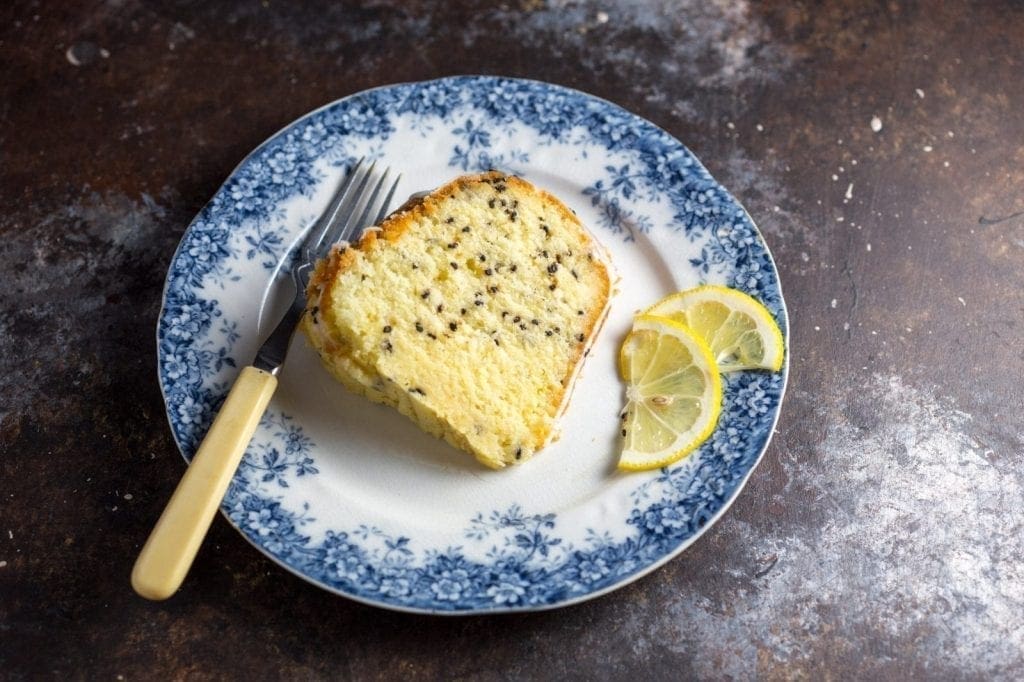 The cake is tender and light, with good lemony flavor.

I’m glad to have found another use for buttermilk! I still don’t know why you would ever want to drink it, though. Just please do wash out the glass afterwards. Do it for Shelley. 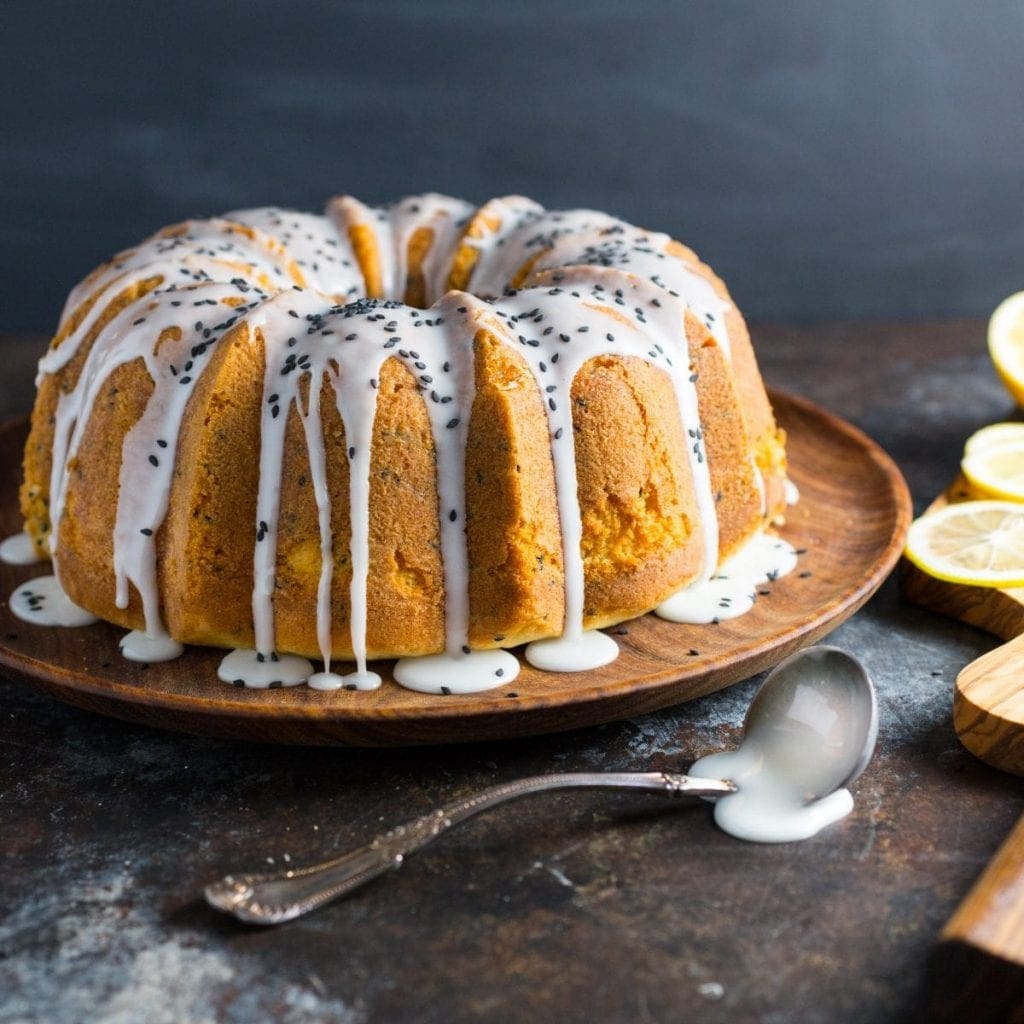