A brief culinary tour of our (not so recent) trip to England and Wales. 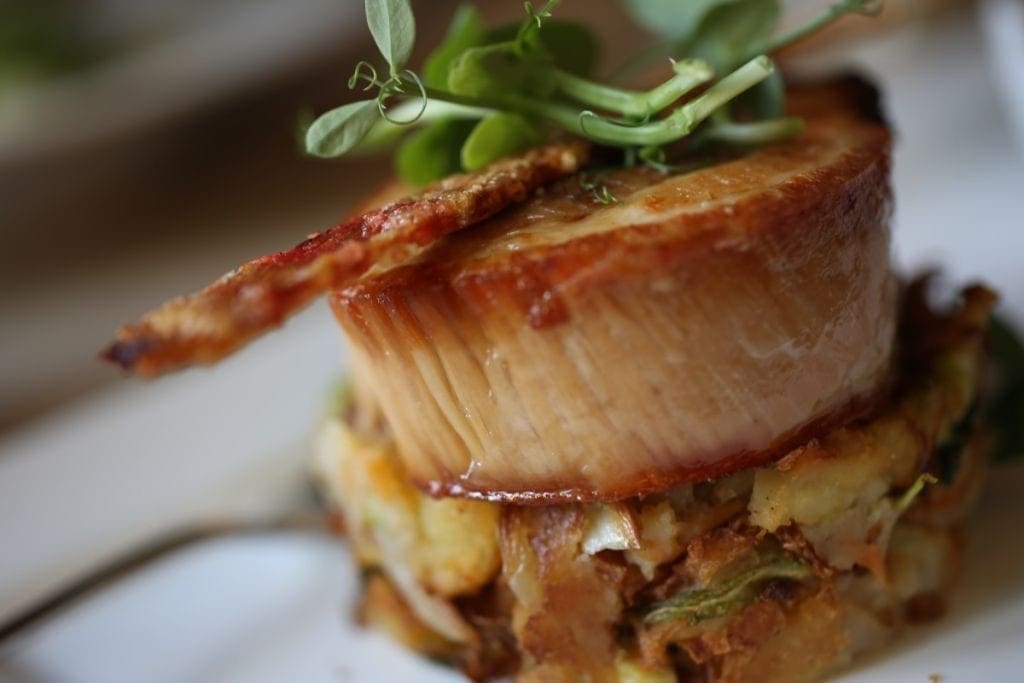 At the beginning of the summer (2013), Matt and I went to England to visit his family and do a little sightseeing. For years we went every other Christmas which means that we hadn’t been to the UK when the weather was warm for ages. Now don’t get me wrong, Christmas in England is magical, with all the fireplaces and fairy lights and mince pies (ok, those are kinda gross). But when you’re driving around it’s a bit difficult when it gets dark at 2pm and the average weather is frozen drizzle.

So this year we went in the Spring and it was lovely. I mean it rained for the first 11 days but it was warm-ish rain. One thing that we’ve learned after years of traveling around the UK is that you can eat really well if you do your homework. It’s not like France where you can pop into a public toilet and come out with a lovely baguette and a really good wine. We really tried to plan ahead and find well-reviewed options and were almost always rewarded with a very nice evening out. A few nights, we decided to “wing-it” and they were… disappointing (AKA nast-TEE). I won’t horrify you with details.

Nerd Alert. We went to London first to spend time with Matt’s brother Danny and his lovely wife Monie. We went out for curry which was really good but I didn’t bring my camera so no pictures of that BUT that night we went to see Star Trek Into Darkness and this little gem was outside the theater. Adorbs, as the kids say. 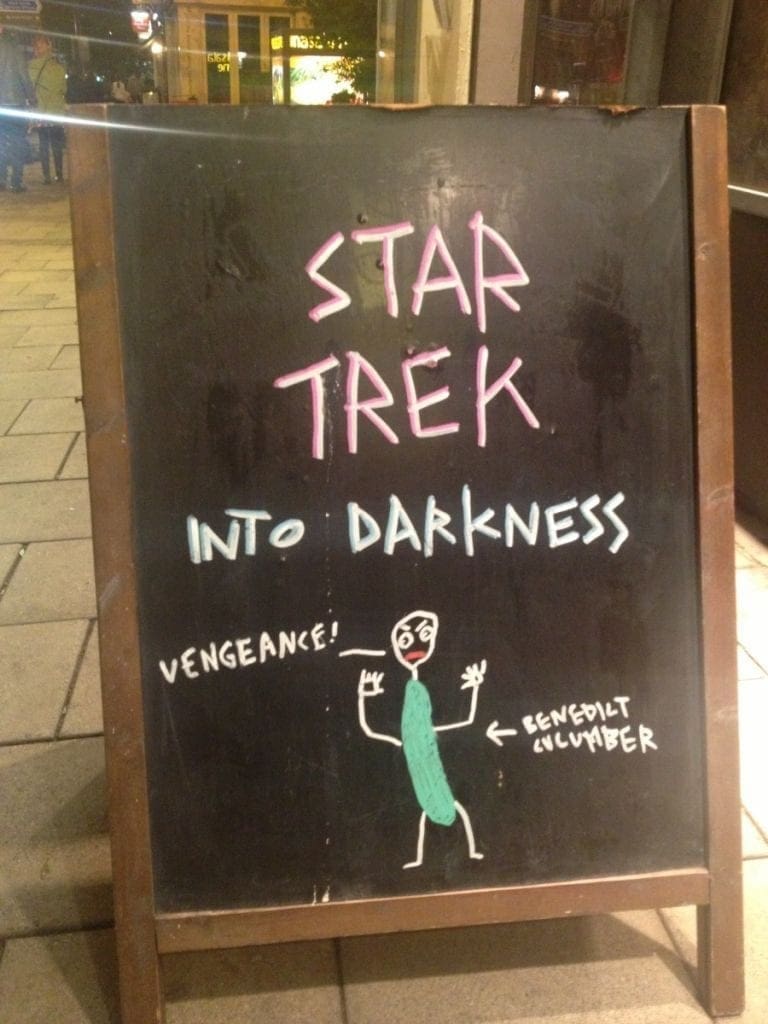 Benedict Cucumber! We also got a special tour of the BBC through a friend which was a bit boring (it’s just a news center now) but, BUT, BUT… 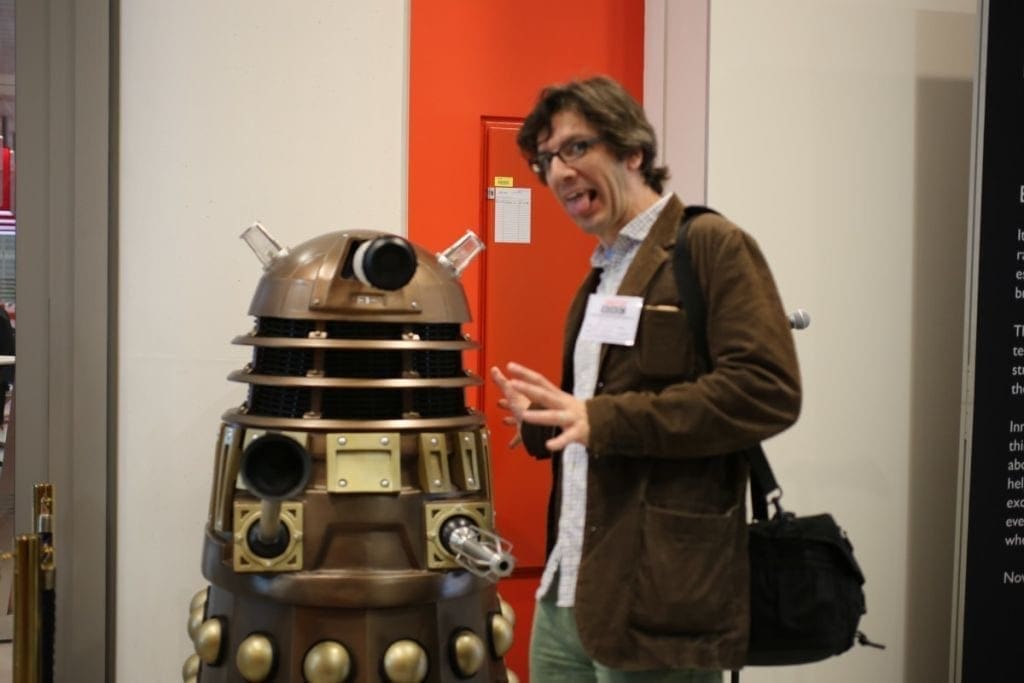 There was also a real (prop) Tardis that we made fools of ourselves in front of.

After that, we went to Kent to visit Matt’s parents and various cousins. The highlight was definitely a trip to the seaside with Matt’s mum where we got a delicious plate of local oysters and crispy chips from Whitstable Oyster Company . Even though it was cold and rainy, it was one of those afternoons where everything was just fun. 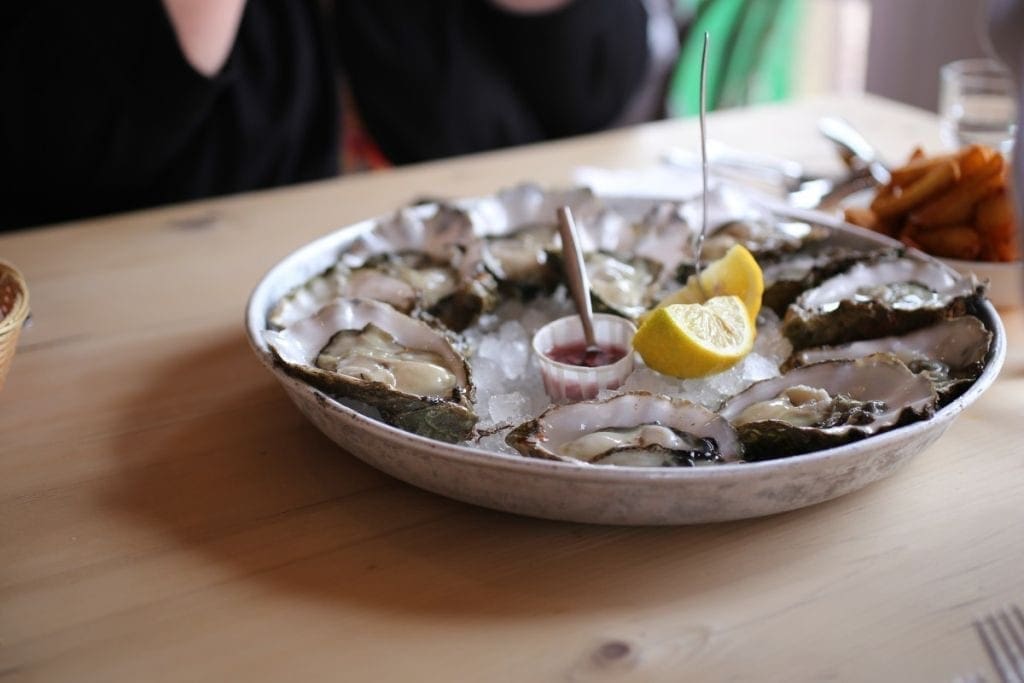 After a week in Kent, we took off on our own. We really wanted to visit the Mary Rose Museum, but missed the opening by about a week so we settled on MONKEY WORLD! It’s a refuge for abused and neglected primates from around the world so you can feel really good about giving them your money, plus CUTE, FUNNY MONKEYS! Highly recommended.

We bounced around south England, legged it up to the Cotswolds to visit an old friend of Matt’s and then we continued on to Wales. One of our nicest nights was at The Halfway Bridge in the South Downs. The room was pretty, if a little boring but the food was really good. We shared Pork Belly with Bubble and Squeak and a really tasty Risotto with Favas, Peas and Asparagus. One thing the English have over us Americans is they really know how to cook crackling. Or should I say CRACK-ling. That stuff is so good. It’s a shame how hard it is to find good skin-on pork in the US. 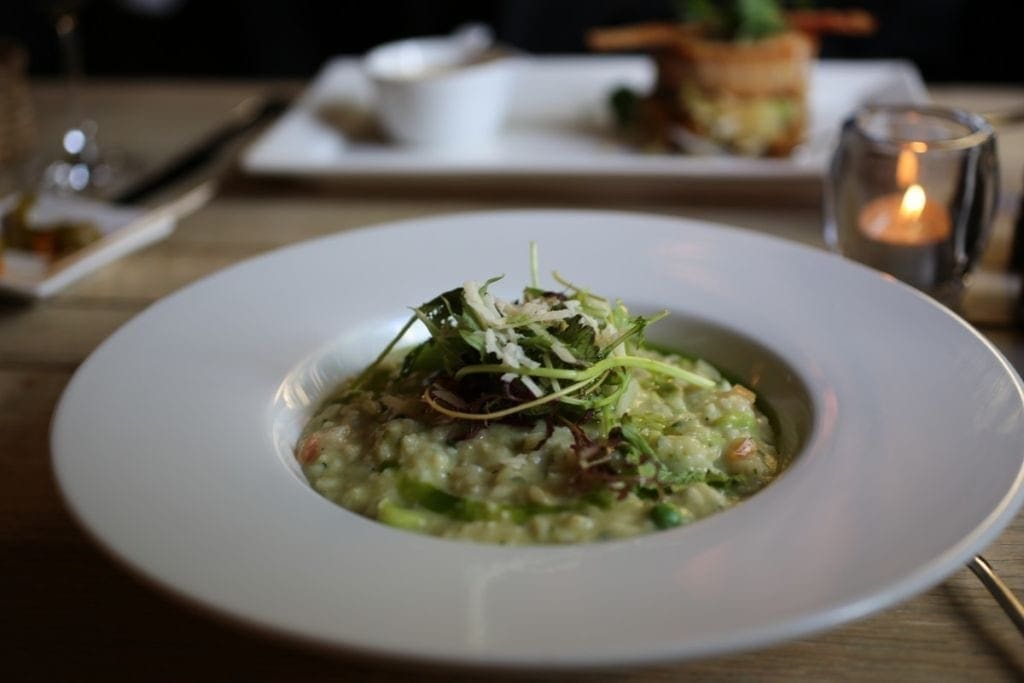 I would say the best (and certainly most fun) night we had was at Llys Meddyg, an amazing restaurant in Wales. We had actually eaten there years ago on our honeymoon and it was the only place we really wanted to get back to again. It didn’t disappoint. Lots of places say they use organic, local produce but here they really mean it. A lot of the ingredients are actually foraged. It’s also well-prepared and incredibly friendly. It’s a tiny little place and the two other couples next to us spoke Welsh which is a very interesting language to listen to. We all ended up oohing and ahhing over each other’s plates and they seemed tickled by my (trying to discreetly) take pictures of our food. Matt had Carpaccio and I had Mussels in Pea Broth to start. Both were very delicate. 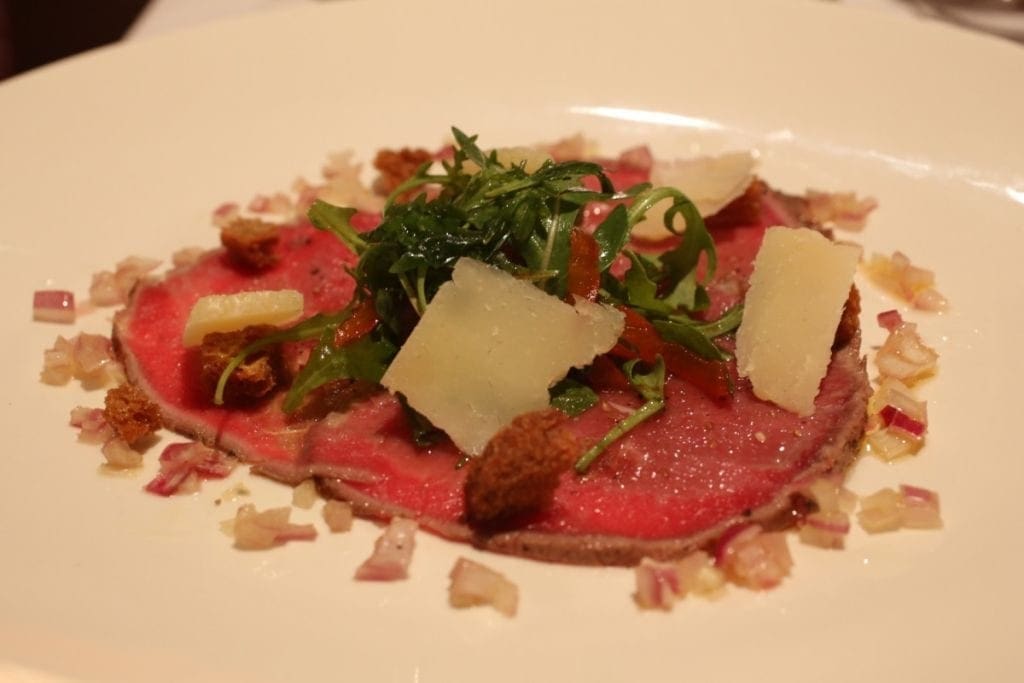 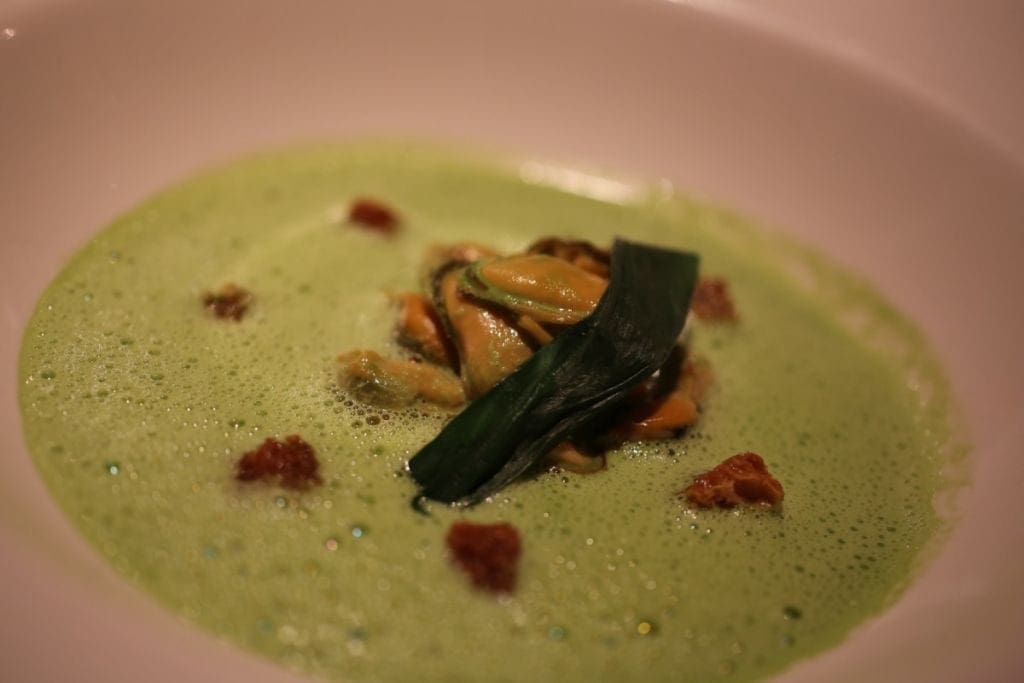 But the best bite of the night was a Beef Cheek Croquette that came with my main course (with roasted shallots and gnocchi). Matt had a Coriander Crusted fish (I forget what kind) which was good but not as good as mine so much thieving was done that night. 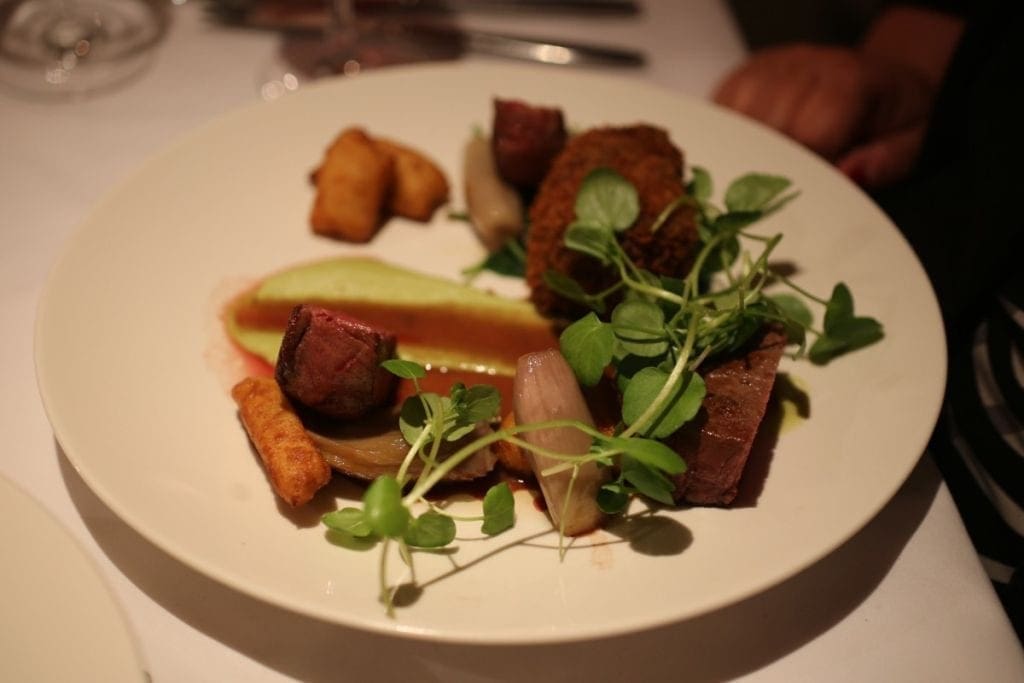 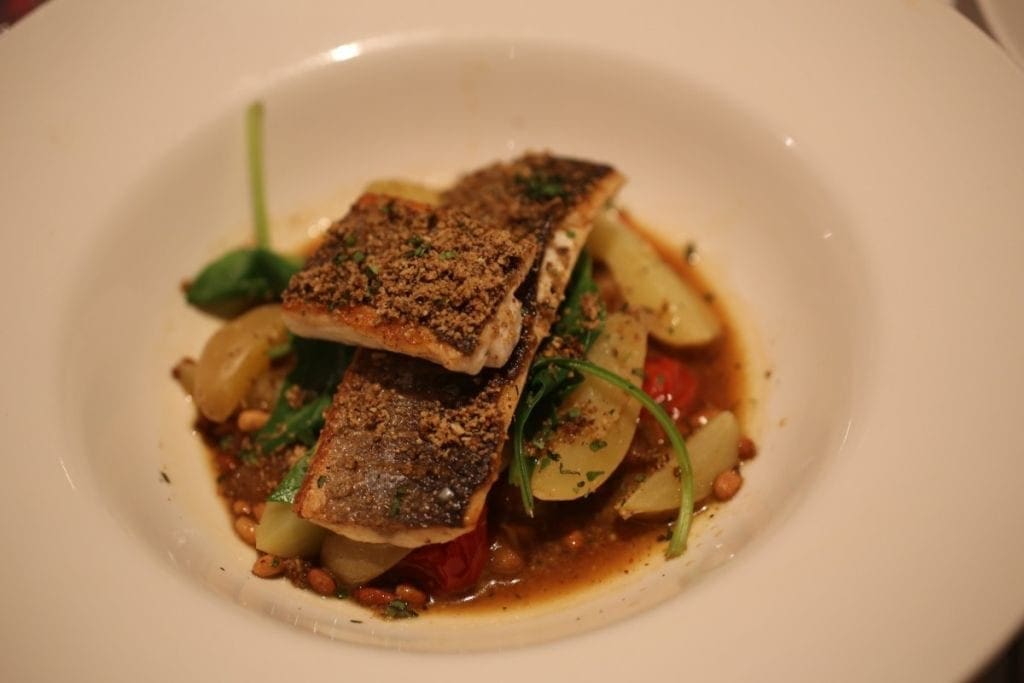 By far the most interesting dessert was a pannacotta made from gorse flower which is a brambly, thorny bush with bright yellow flowers that grows everywhere. It had a very delicate, almost vanilla-like flavor that was really unusual and unexpected. (Update: we have subsequently attempted to replicate this recipe, with murder-colored results) 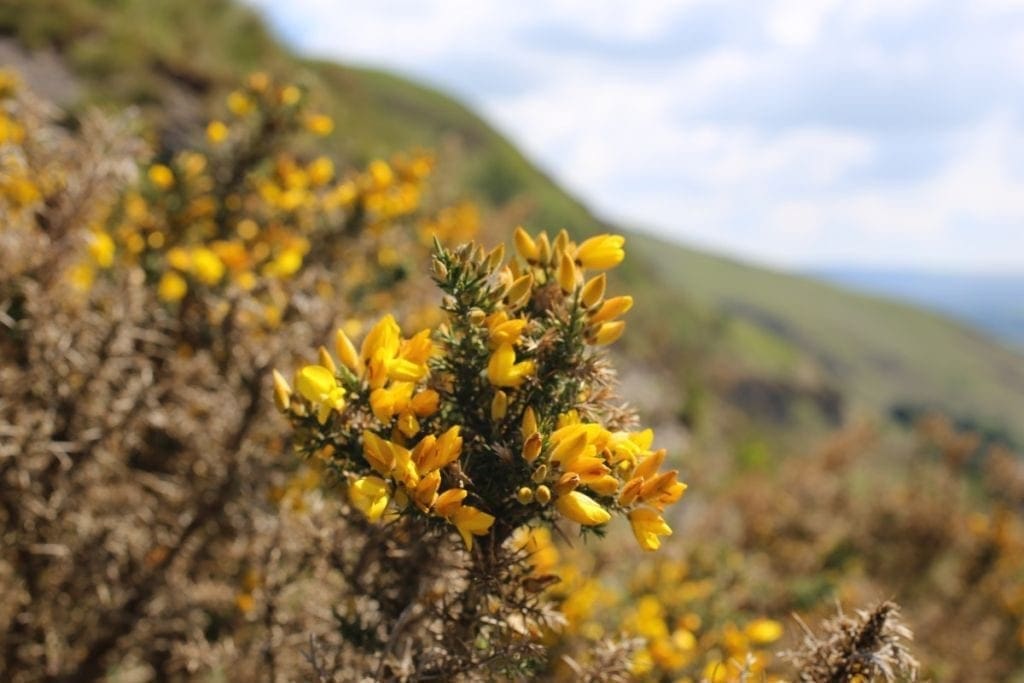 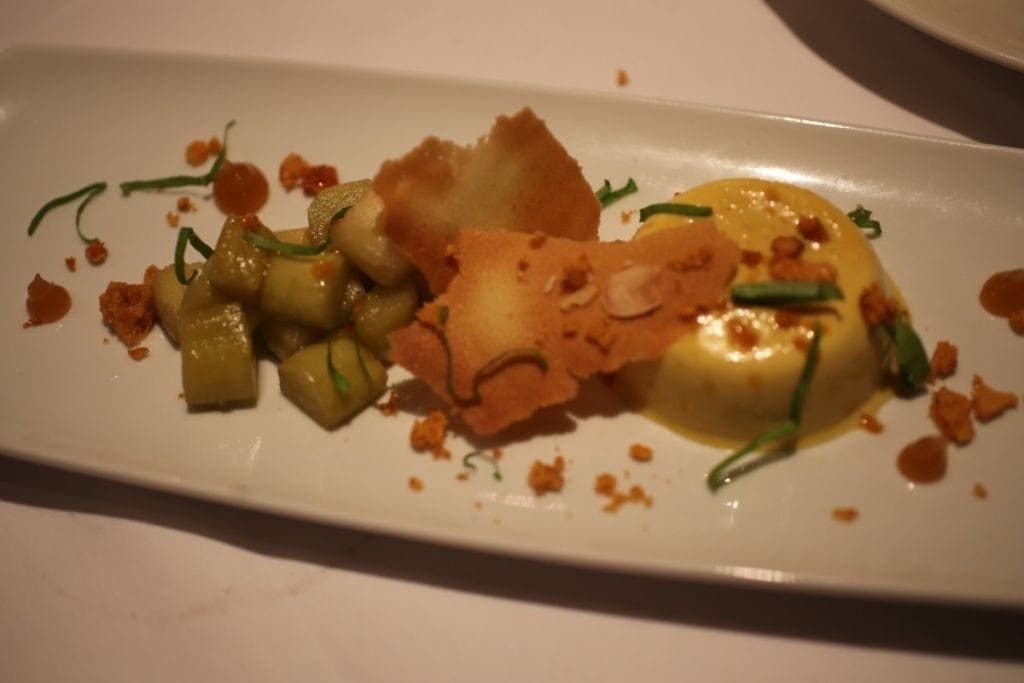 Being ridiculous (and tipsy), I wanted to leave a little message letting the staff know how much we enjoyed the evening. The waitress thought it was hilarious and when she came back from the kitchen, told us that the chefs would be boasting about this for weeks. A great night was had. 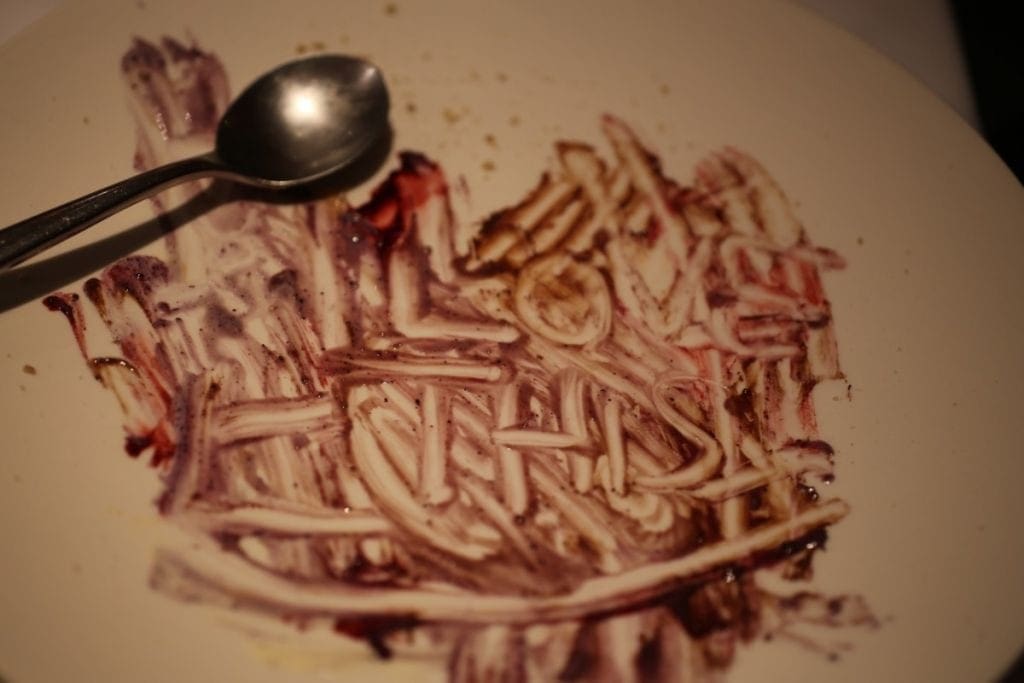 So here are a few miscellaneous shots from the trip which you might enjoy:

Did you know “Fuggles” is a type of hops used in making beer. We learned this when we took a tour of the Hook Norton Brewery. Get thee to a pub quiz! 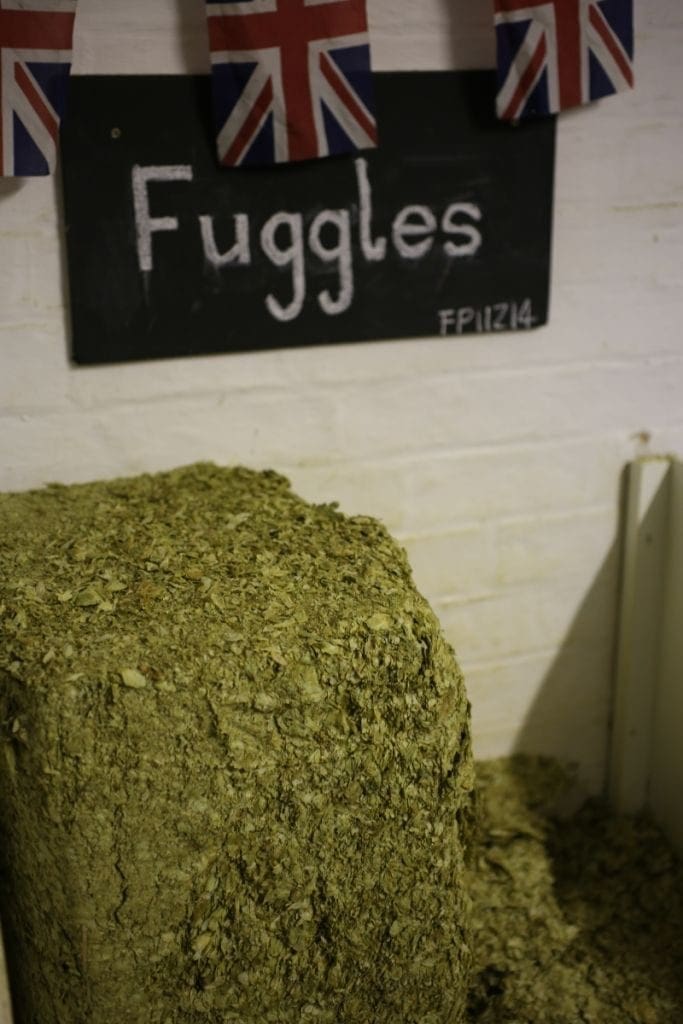 I told this guy we were having lamb for dinner and this is the face he made. No lamb was eaten that night.

This wild pony looks like the love child of Vince Neil of Motley Crue and a unicorn. 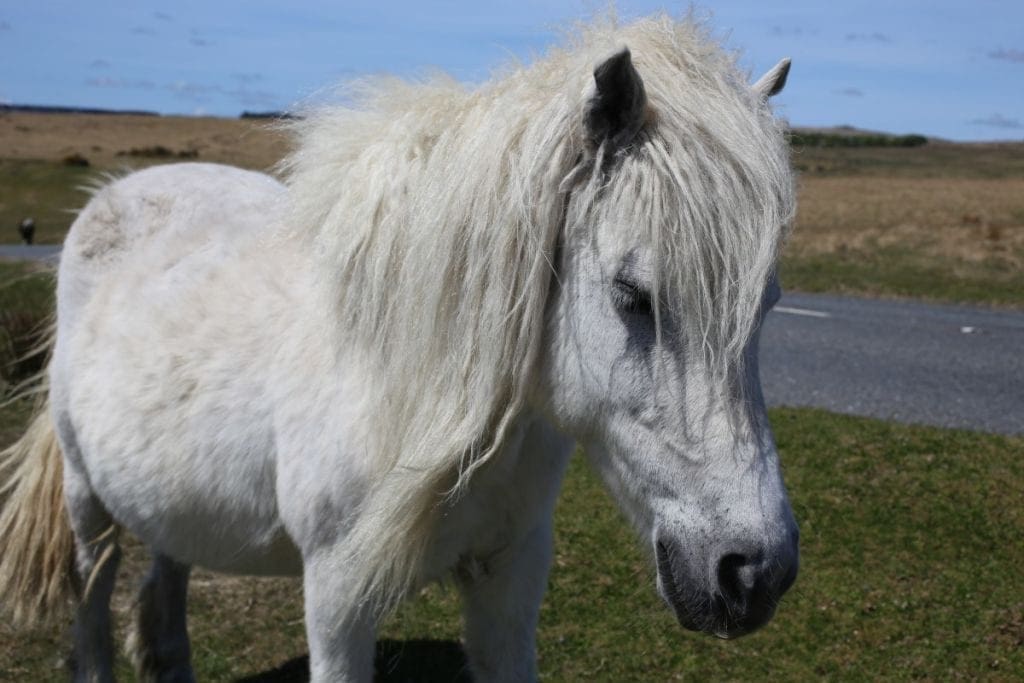 This man very Britishly tried to shoo away a wild pony that was bothering him whilst he was having his tea. 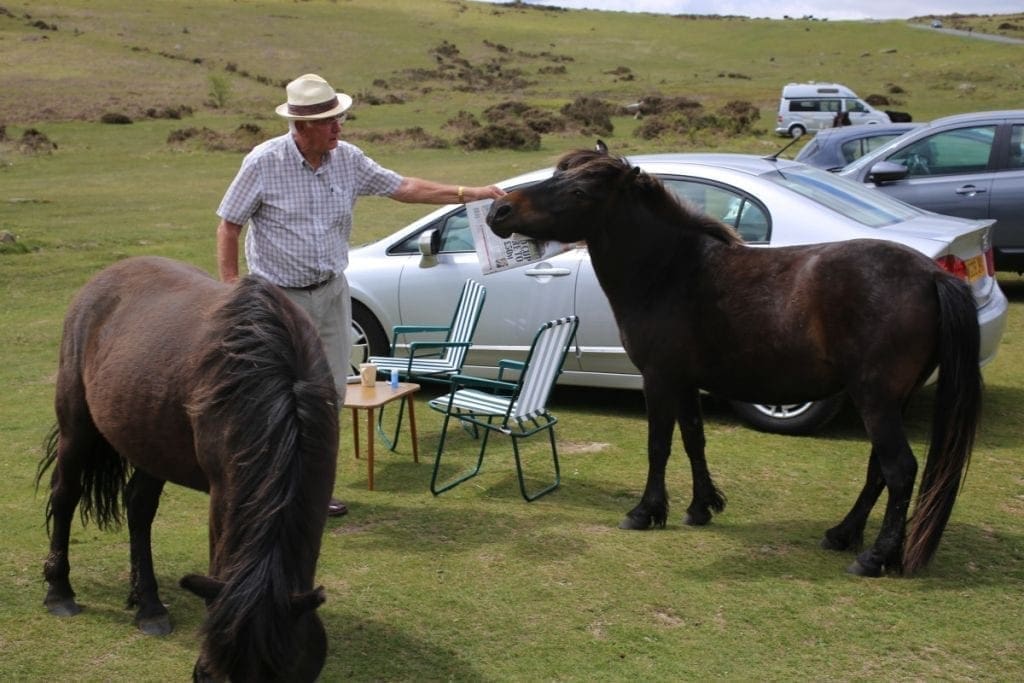 And last but not least, these wild ponies are in luuuurve. 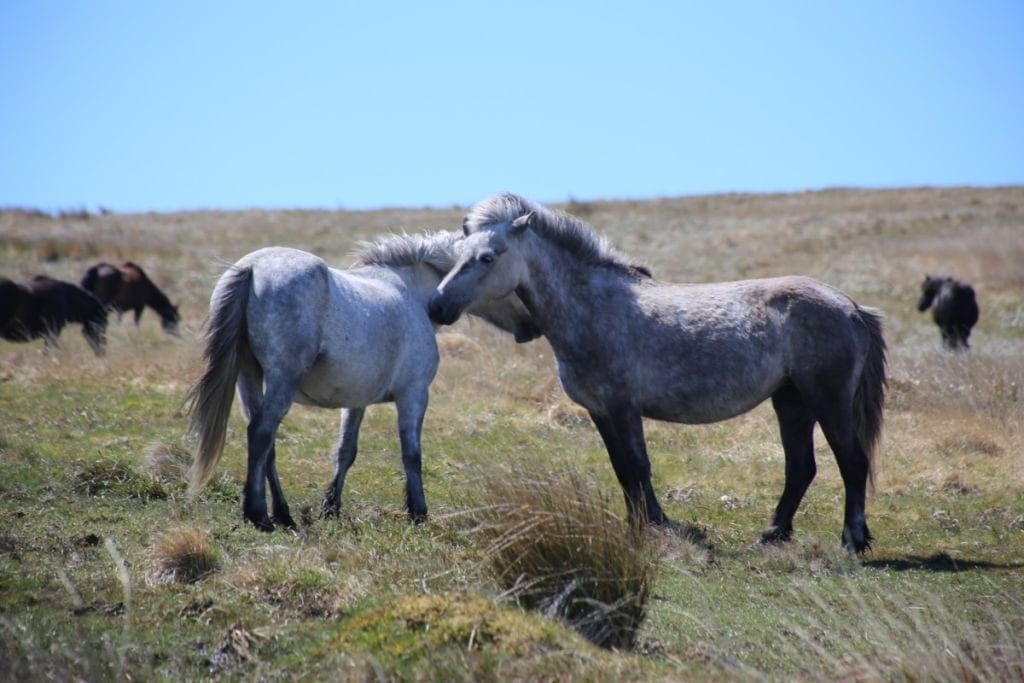