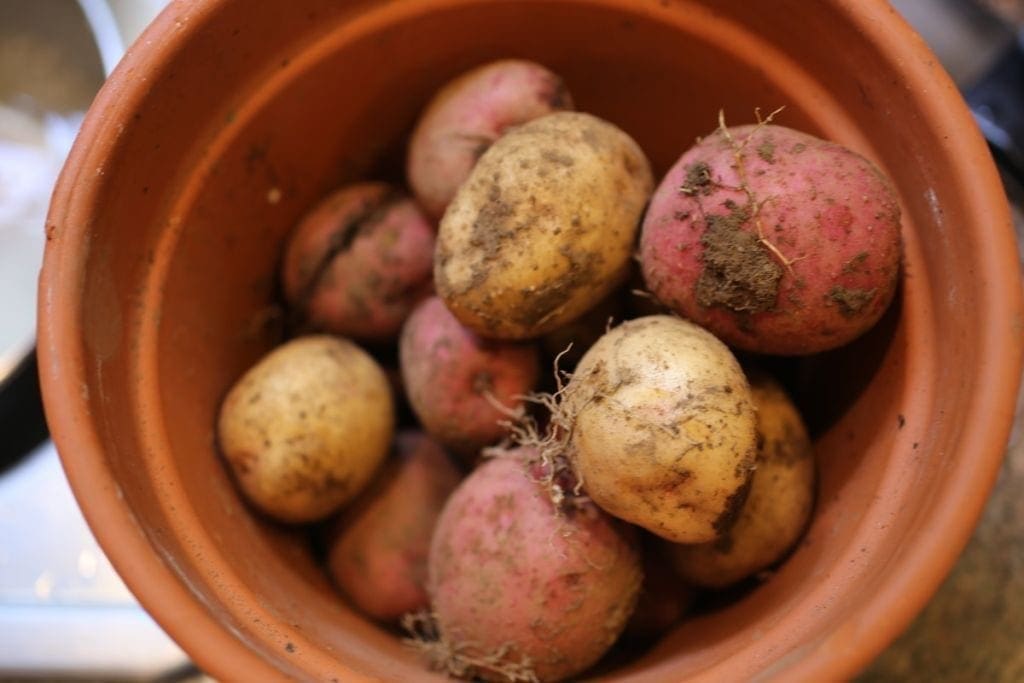 It’s October, and the bulk of the vegetable garden is finished for the season. Of course, our herbs are still going strong on the deck, and we’re still pulling out ripened tomatoes, but the soil beds are now empty. For our first year, we didn’t do too badly. Here’s a recap.

Although last winter wasn’t particularly cold, it was really long – snow persisted through March, and this meant that nothing happened in the garden until early April, when I built the raised bed. Emily’s mom Diane had given us a gift certificate from White Flower Farm, so we ordered potatoes, leeks, zucchini, cucumber, garlic, shallots, and a selection of herbs. I also picked up some carrot seeds from the supermarket. The farm sent us plants when they were ready, so from early April I planted each set of vegetables as they arrived.

The garlic and shallots were apparently doing very well, until we returned from our three-week trip to the UK and found them rotted. Our theory is that they got too wet. I do want to try again with both of these, since we use them all the time in cooking. Garlic can certainly be planted in fall for an earlier harvest, so I’ll get the raised bed ready to plant again probably around late October. We picked up a few bulbs of hardneck garlic some weekends back from the Cold Spring farmers’ market; I’ll try diverting these cloves from the kitchen table to the garden bed in a few weeks. (What’s funny is, some of the “failed” garlic I abandoned in June is now re-sprouting there. I don’t know if it will yield anything, though.)

The potatoes were fun to grow, but the yield was disappointing – especially since the actual seed potatoes were so expensive ($16 for a dozen or so) and we only dug up around 20. (Mind you, they tasted bloody amazing.) Potatoes have to be rotated – if I were to plant new tubers next year, they’d need to be somewhere else to avoid getting blight. I don’t even know if we’ll be in our house come mid-summer 2014, but I think we’ll skip the potatoes next year.

The carrots were a total failure, let’s not bandy words, it was a pathetic showing. I even tried a second packet of carrot seeds from my Mum, who had great success with them. She left them in deep containers rather than directly into the ground, so that might be a good approach if I try growing them again. If I try again, I should probably expand my carrot knowhow beyond the information I pick up from @RealCarrotFacts (sample Twitter description: “Carrot is one of the most famous vegetable in the world”).

The zucchini was fantastic – impressive growth, with three or four squash a week at its prime: definitely a contender for next year. The cucumber didn’t do so well, but I believe it languished in the shadow of the squash (is that a Lovecraft title? if not, it ought to be).

So for next year, we have a few changes in store. First, as I said, I’ll plant garlic and shallots in late Autumn this year. That should give us an early summer crop. I’ll also put in some chard as early as I can in the spring. For the winter, we’ll bring in most of the herbs (the rosemary can probably stick it out on the deck) and make a lot of fucking pesto.

And over the winter I’ll scatter cracked corn on the garden and encourage the hens to walk around and poop on it.