The harvest weeks of late summer, going into early fall, is when the Hudson Valley really struts its stuff . While there are festivals, fairs, and merry socials all year round, the weekends at this time of year become a whirligig of competing events, all worthy of your time. Last weekend, for example, our options included a beer festival as well as the first Beacon Film Festival. We limited ourselves to just one: the annual Common Ground Farm Pig Roast, at Obercreek Farm.

Obercreek is an old estate sited in Wappinger’s Falls. Tim Heuer and Sam Wildfong, the farmers, came from CGF to start their own farm on the land, and it’s been in operation now for a year. We’ve been buying their boxed Asian leaves from Adams – probably the best prepared salad I’ve ever had. We actually met Tim  last year when we attended a class in pig butchering run by Mark Elia and Jennifer Clair at the Mountain Restaurant Supply in Newburgh. And Obercreek Farm will next year take over the CSA from Common Ground Farm, which is taking a few years out to rebuild its farmable land. So it’s a pretty tight-knit community – farmers, restaurants, and stores all know each other well and work with one another’s produce. CGF is focussed at the moment on its educational and benefit programs, so the proceeds from the dinner go to a great cause.

As well as the farmers, we met Obercreek owner Alex Reese, CGF director Michael Kriegh, and many members of CGF and other local institutions were also present – including our local Representative, Sean Maloney, and State Senator Terry Gipson. 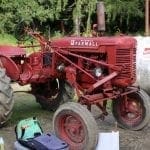 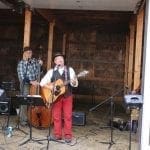