Like most dogs, especially rescues*, Arya likes to be around us. A lot. Usually that’s A-OK because look at that face. Look at it!

But… doggie in the kitchen with heavy pots, hot pans and poisonous ingredients (for pups. I don’t cook with arsenic…much) is a recipe for trouble. Oh dear, cooking blog humor.

Luckily, little miss crazy eyes has become obsessed with a counter stool we bought at Ikea a while back. Occasionally we’ll have people over and they’ll think, “Hey, that’s a nice chair. Maybe I’ll sit in it so I can chat with Emily and Matt while they cook”. Arya will then launch herself onto it first, so they awkwardly end up perched on a corner while she innocently tries to look like she’s been sitting there for hours. Or, even better, she’ll let them sit for a fraction of a second before she leaps on to their lap, requiring them to hold her or she’ll slide off their legs while they look on, mortified. Either way, she ends up with the chair.

I can’t blame her though because it’s a great place for her to sit and watch us cook without getting in the way, so it’s now referred to as “Arya’s chair”.  Stop it! I can see that face you’re making. Now when she starts snarfeling around our feet as we cook, looking for dropped bits, we say “Arya, go to your chair” and up she goes.

*Extra points for you nerds who noticed the TARDIS and Dalek silhouettes (Scherenschnitte) Matt made on the window behind her on the picture above.  Well done! Now get off the internet and make some real friends. (Just kidding! One of us. Gabba gabba hey.)

P.S. This is Arya’s expression when she senses cucumbers around. 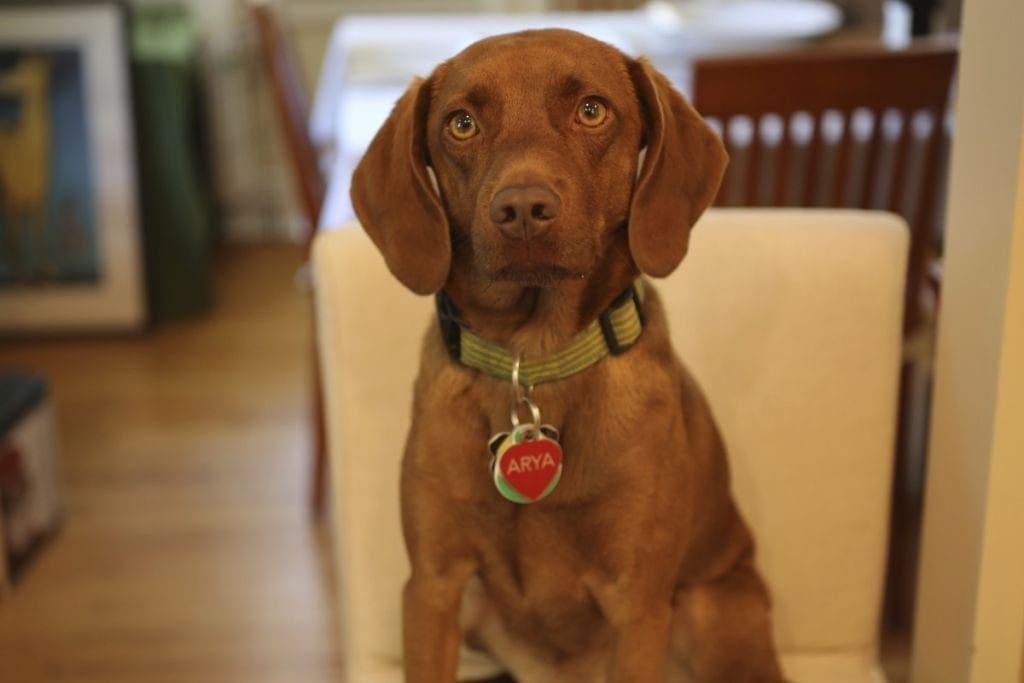 * We adopted this silly little monkey from an amazing rescue group in Brooklyn called Badass Brooklyn Animal Rescue. They are a fantastic, all-volunteer group that rescues pups from high-kill shelters in the south, rehabilitates them, and places them in homes all over the tri-state area. If you are looking for a dog, or are interested in volunteering or donating, I can’t recommend them highly enough.